Loveless because of an "unlucky" address? 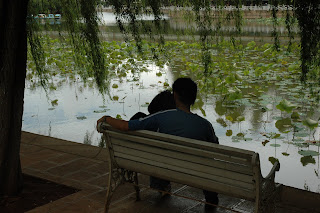 Apparently today's some sort of single's people's festival? 11th of the 11th month= 1111. All single. According to my teacher this "festival" was made up sometime during the early 1990s, when college students in Nanjing thought November 11 should be the festival for single people as it contained four number "1". Since festivals are often embraced over here, my teacher also clamed that “singles day is now a special day for all fashionable young people.” It’s a perfect day to go on a blind date or go out and have fun. There you go. All singles out there: out and hunt!
Anyways, I read the most hilarious news story today on in our news reading class: a mom, unhappy with her 30 year old son because he hasn't found himself a girlfriend yet. The son, however, blames it all on the mother, because she bought him a flat that just happen to have number 11 and be on the 11th floor. He claims his misfortune in love is due to his unlucky address: 11-11. Apparently, he had also gone to see a fortune teller who had pointed out that his address might be causing him a dry love life.
(Geez, to think that people actually gets paid for coming up with such crap?).
Is that superstition pushed to the limit or what?
I wonder why the mom doesn't tell her unhappy son to buy himself a new flat to see if he's any luckier in that one.
Here's the article (in Chinese)
Posted by Jonna Wibelius at 4:07 PM

If she's the one pressuring him to get married already, maybe she should by him a new flat? :)

11/11 seems to be a popular day for strange holidays. Here in Korea it's "pepero day" a holiday completely corporate constructed holiday to give as many chocolate covered sticks of cookie to as many people as possible. 1111 looks like four sticks of pepero, so obviously it's a perfect day for such a ridiculous holiday. Incidentally, it's also Veteran's day in the US, though I don't find that particularly unusual.

wow, that's something I've never heard of before. I kind of like the idea of a holiday celebrating single people though.

maybe the unlucky guy should buy himself a cab
and try to pick up (yes, pun)
tourists.

I think the 30 yo guy's mum would have been better off buying him a Merc.

Wow superstitions still exist. Many by numbers in China and Japan. Here it's Veterans days because on 11 hour on the 11th day on the 11th month, an armistace was signed on in 1918 that ended World War I. May we never forget the horrors of the wars of the 20th century.

flyingfish -I think he should stop complaining, be grateful for the flat he GOT, and if he feels it is preventing him from finding love he could sell it, and move far away from his nagging mother... to a more lucky address... :)

조안나 -yeah I remember when we were talking about festivals in class, when it was my Korean classmates turn they had a LOT of festivals to tell about.. haha. Apparently festivals are big over there too!

ero -hehe, that is another way to solve the problem.. maybe.

Adrian -I think he's better of saving up for his own flat if he feels so unhappy living in a house someone else paid for... gosh.

The 11th day of every month is the day when people in Beijing are supposed to line up while waiting for the subway to arrive. Because the "11" looks like two people standing in a neat line, the public transportation authorities decided to make the 11th the day to remind everyone of the importance of proper queuing.

Naturally, I wish we could all line up neatly every day of the month, but I'll settle for the 11th for now.

It's called 光棍儿节。Note the Chinese name is not just "singles' day", also contain some self-mock emotion. The word 光棍儿 is a funny call for single people, especially male.
There will be around 30 million men won't get wives in future several years. What do you think donate some your country's girls? :)

Is there anything to prevent him for just changing the name of his unit to, say, #47?