Treating the symptom, not the problem 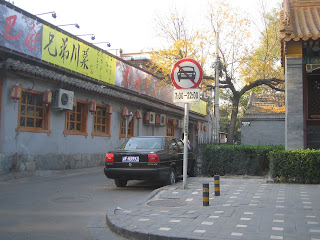 Yeah, not exactly where you are supposed to park your car but it works for now so why not?

Some weeks ago my gym membership was up for renewal. After a long discussion including some inappropriate talk about my boyfriend, I finally bought a new card.

However, when I some days later went for a work out and handed over my card to the reception girl who scanned it, she looked at me and said:

-Sorry, your card has expired.

-Must be some mistake? I said. I just bought a new one!

-Ah, OK! The girl said and handed the card back to me with one hand, meanwhile waving me through with her other hand.

“Ah, it probably hasn’t gone through yet!” I thought, and went in.

However, the next time I arrive the same story repeated itself.

-Your card has expired!

-That’s impossible, I just bought a new one!

-Ah, OK, well then you can go through!

When this had happened 4 times I realized that it wasn’t going to change until I decided to do something about it. The reception girls seemed happy with first telling me off, and then waving me through as soon as I provided them with an explanation. I didn’t feel like having to explain myself every time I went for a workout though, and also, I’d just bought a new membership card. This really shouldn’t be happening.

So yesterday I brought my membership receipt.

I arrived just before peek hour was about to kick in, so all the reception girls (a total of 10) were at the counter, greeting me with a “Welcome!” as soon as I stepped out of the elevator.

“Excellent, they are all here!” I thought.

I handed over my card and one girl scanned it.

-Sorry, your card has expired, she said.

-Yeah, but there must be some sort of mistake, I said, and handed over the receipt. I just renewed my membership card so it cannot have expired.

-Oh! The girl looked at the receipt then handed me my card back.

-Yeah but… like… don’t you want to… do something about this?

-But… every time I get here you guys tell me my card has expired!

-Yes, but your computer doesn’t know! Every time I get here this situation repeats itself!

-But now we know!

-Yeah but I don’t want to have to tell you every time that I just renewed my membership!

-But now we all know!

At this point I was really annoyed.

-Can’t you just change it in your computer? Something has obviously gone wrong when I renewed my membership!

-I promise you! We will all remember!

I was furious when I eventually went to the changing room. As if they are all going to remember. I bet you 1000 rmb that the next time someone scans my card she is going to tell me it has expired.

Maybe it was so that their computer was broken, or that they for some reason were too busy to fix it at the spot (although seriously… 10 girls behind the counter. One of them held my card. The other 9 watched. And I can swear that I heard 7 of them giggling) but then, then why didn’t they just tell me?! They could have done it in so many way. They could have told me that they were going to solve it some other day even. Anything. Just anything but ignoring it. Their whole attitude: “OK, fine for now!” is just not doing it for me. Why do I feel that over here, people often treat the symptom and not the problem? They solve things temporarily, although the real big problem is just swept under the carpet.

It’s like at a friends company where the product they produce is painted by a machine. Suddenly someone discovered that a little part of the product didn’t get painted. How did they solve things? Well, by hiring someone who could paint that little part of every product of course. How about changing the machine? Naaaah, too much trouble. Let’s fix it the quick way instead.
Posted by Jonna Wibelius at 7:45 AM

I work in an Information Technology department. Upwards of 50,000 people use my application.

For obvious reasons, we prefer to treat the problem - because it means 50,000 fewer calls about the symptoms :)

Jonna, you are too nice! You have to be firm and tell them this is unacceptable, and please call the manager if they can't fix it themselves. Right now.

You know why this happen?

Jonna, they are not happy with your answer regarding your boyfriend. I do not want to sound like bashing Chinese girls. But they are the most jelous girls on earth. They try to give you a hard time. This happens to me to when I was in China. When people got power they usually abuse it if you do not do things or say things their way. Especially girls. Sad, but true. Dont get upset about this kinda of stuff.

Oh, yeah they call you chuby? lol. More jelousy. You are blonde and they are jelous about it. Also you have nicer butt or bigger breast whic caused their jelousy meter to explode. lol

Kosmo -that's what I mean. Treating the symptom rarely solves the big thing.

Nicki -Trust me, I was firm! I was on the verge of yelling at them yesterday.

Jiang -ehhh no one called me chubby?
And I don't think they even remember it was me.

that would drive me nuts if that happened to me! did it happen yet again or did they really remember?

mmYes I fully agree with that. Treat the symptom first, if you able to solve the symptom then automatically your problem will be solved.

Not to be cynical or anything. But, I bet you RMB1000 that someone pocketed your membership fee and that is why the system isn't updated. You stand out enough that everyone knows about it, so they let you through. I also bet all the reception girls are in on it. Just my 10 fen.

This is totally retarded. I think I would ask for a refund and then go to a different gym. Those girls need one big collected whack in the back of the head.

Excellent post, Jonna! I hope you get your gym membership card resolved soon. It seems silly that a few keystrokes on the computer wouldn't fix it. I agree with Nicki... time to call the manager and see that it gets fixed in the proper manner. Whatever you do, I hope you enjoy your workout. Remember, it is suppose to be stress reliever!!! :D

Was there a manager or someone higher in authority that you could talk to, to solve your problem? It does seem to be an ever present problem "Pride" & "Power" someone who doesn't want to admitt there is wrong being done cause that means someone didn't do the job right & then not wanting to loose face they pull the power card. I would laminate that proof of purchase for your membership until the computer gets changed otherwise if you lose it or it gets destroyed you'll have to go through the grinder squad at the front desk......I'll pray that someone's heart softens and helps you Jonna that is so aggravating.

lianne -I went back there yesterday and I can swear the girl behind the reception looked scared when she saw me. She scanned my card and looked at the computer for a while but let me through without telling me anything... improvement indeed!

James -treating the symptom is normally just a quick fix. Eventually u have to move onto he real thing.

George -U think so? I doubt it, but then again, who knows? It is not as if they ever show you an official price list or anything :)

Brad -Yeah.. only thing is that I really like the trainers... just not the reception girls.

Carl -yesterday it went well.. so so far so good. But I am pretty sure the story will repeat itself. I guess I have to contact the girl who sold me the membership card. After all, she's the one responsible.

Pete -I never ask for a manager or anything... it is not really in my personality to make a scene or to complain. I always try to look for a simple solution... Although those girls bug me bit time I would hate it if one of them got fired on my behalf. I guess I'm a softie in that way.

That sounds super annoying. And giggling seems to be a national problem there. Dying to know whether they let you in the next time, so do let us know how that went.

Joanna, admitting their fault would be "losing the face", and that's a shame for a chinese ...

So, now you have a membership for life at that particular gym, without ever paying again. Respect!

It's just more of the standard "not my problem" mentality. It is just more glaringly obvious here, but it happens everywhere. Would you rather "Ok, I'll inform my manager" to next time "Sorry about that, I'm sure it's being processed", to the slight "Ok, go in."

The more we are here the more people are the same in trying not to work, but different in how they discuss it. Here that acknowledge the problem and then ignore it, elsewhere they acknowledge it and then pass it off to someone else.

I would hope the front desk girls do not have the ability to change membership information. That would be a big security hole. Soon all her friends would have lifetime memberships.
Though they should be able to inform a manager to handle it through channels. Which sounds like what happened.
People rarely are willing to admit their own lack of authority or their companies limitations (at least until they no longer care about the job)

I feel your pain here. My boyfriend and I stayed in a hotel in Changsha for two weeks. The hotel was new - very new, so new that it stank of paint, and every morning at 7am they were using a jackhammer in the bathrooms on either side of our room. But, even though it was brand new, the card to open the door to our room never worked, right from the first day. We told them about it many times, but they never fixed it, and never told their workmates, so we had to explain in broken Chinese every time we got back to the hotel. They would look at us suspiciously and say something to each other about the stupid laowai who couldn't use the keycard, until they worked out (AGAIN) that it was broken. And someone from security would have to come down and let us into our room, every single day (sometimes at one or two in the morning!) for TWO WEEKS. It was so special.