The week that went by… 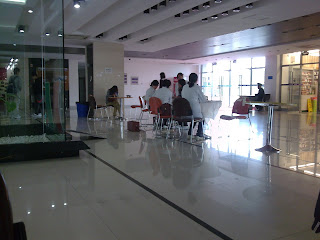 I’ve run out of photos so my weekly “photo essay” theme has obviously been cancelled. Thought I’d come up with something new, and what could be better than a weekly “summary” of “interesting” (or not interesting) things that happened but that weren’t big enough to make it into a whole blog post?

I’ve turned into a cheap bastard

Or how else can I explain my reaction when I tried a new canteen at uni the other day? I normally eat lunch for between 4-6 kuai at my school. Yesterday I came a bit late, and all the good stuff was gone, so I decided to try another –a little bit more fancy- canteen across the hallway (OK, it’s actually not more fancy at all. It just has more choices). I picked four dishes: 3 veggies and 1 big tofu patty with rice. I went to the counter to pay and was shocked when I was told my lunch was 9 kuai!
-NINE KUAI?! That’s kind of expensive?! I almost yelled.
Fortunately I managed to stop myself, pinch myself in the arm and remind myself that I recently had dinner at a new Spanish tapas restaurant at Times Square in Suzhou, and that that cost 200 kuai for 2 people. Scary how easily you forget.

Lunch area turned into a hospital

Since we are on the lunch topic, I might as well also share a funny view I saw when I came downstairs to have lunch the other day. On one side of the room were students eating. On the other side, a white-coat-medical team were performing health checks on students for free. Only in China! 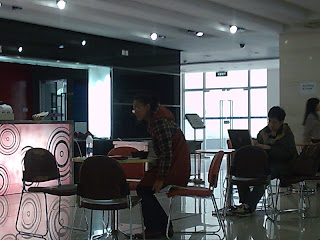 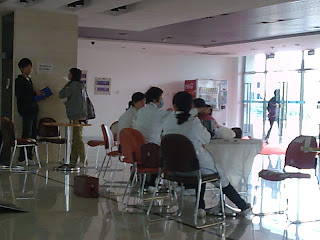 Elevator turned into a toilet

So there I came, last night. Finally arrived home after a long day of uni and work and then trying to get a taxi in the rainy storm weather (I managed to forget my umbrella at a restaurant throughout the day). I was wet, cold, tired and not in the mood when I pushed the elevator button. So, when the elevator door opened and I was greeted by a big, brown dump (!) on the floor, spreading a not-so-lovely smell, I kind of felt like screaming out loud. Let’s hope it was a dog. Like the British man (who were taking the elevator with me) said:

-It surely must be too cold for little children to wear those split pants now?

Yeah. Sure hope so. However, just to make sure I’ll always take the stair from now on.

Winter has finally arrived in Suzhou. You can tell from how the flat is suddenly freezing cold. It’s quite funny actually, one week you are using the air con because it’s still so moist and humid out there, then you turn it off for 1 week or so, and then you have to turn it on again, although this time to heat up a freezing cold flat? The walls over here are paper-thin. When the wind blows outside you can see the curtains moving inside.

I had no problem with the cute little girl on the 11th floor playing the piano. She’s actually quite good, and we share a favourite melody: “Fur Elise” that she plays at least twice/day.

But when the neighbour boy started playing trumpet things went a bit sour. There I was, enjoying the little girl’s “Fur Elise” until it was suddenly interrupted by some trumpet noise. It took a while for me to figure it out, but now I know: he is trying to play “Twinkle twinkle little star” without making any mistakes. Every night. Five times. (And he hasn’t made it so far.)

The staring game on the bus

I really enjoy using public transport, so therefore, I’ve embraced my bus rides to school with joy. However, the one thing I still cannot get used to is getting on the bus and having everybody staring at me. Since I don’t catch the same bus every morning (buses in China don’t really follow a schedule… they just come when they please) it’s the same kind of story every day: I get on the bus, people’s chins drop to the floor and for the first 2 minutes on the bus I become everybody’s staring-object. I normally just try to ignore it, people tend to get bored after a while, although some days I get real fed up. Like with this old man the other day: he just wouldn’t stop staring at me, and he wasn’t even trying to be discreet. So, I decided to stare back. Like really stare. That worked. When I looked back at him he must have felt ashamed because he turned his head away… only to, 3 minutes later, look back at me again. I had to engage in the staring contest 5 times until he finally gave up.

I still don’t know why it is considered so strange to see a laowai take a bus in Suzhou? Every morning when I am waiting at the bus stop at least 4 different taxi drivers stop by, waving for me to get into their car.

Posted by Jonna Wibelius at 8:46 AM

Funny stuff Jonna. If those walls are so paper thin that the cold air gets in that easily, I can only imagine how the young protege's trumpet playing is being received.

When I was over there I remember eating breakfast and being stared at by an old woman as she ate her breakfast. She ate, drank, and even wiped her chin all without taking her eyes off the fascinating event of a Laowai eating breakfast. I decided to stare her down like I was in an duel. After 30 seconds I caved. She didn't even change her expression.

well, jonna, i have to say, your staring back way is quite effective. i guess sometimes people keep doing so just because you guys looks ignore it. they think you cant feel it or dont care. so, use you way to stare back and it works. haha
and also i was wondering what you could buy with only 4 yuan. even as a chinese myself, i still think the money is not enough to buy the amount that could make you feel full. tell my how. and i believe the price of veges must be more expensive than where i live now. so, how do you manage it?
carol

Jonna-
You made me laugh today I love the short story portion of your blog! It's new it's a good venting section & entertaining too! As for you being cheap - I think your turning Chinese...LOL...the lunchroom medical clinic what a riot...I'll have some fried rice & my blood pressure checked....the dueling piano\trumpet concert & of course the sweet breeze up the old elevator trick tops the cake. The staring game is the only situation that is explainable...it's only because you are such a lovely laowai that they all want to stare....(You GoGirl)!!!

9 yuan does seem kind of expensive, though I guess it depends on the portions. Did the food at least taste OK?

I'm so glad the staring-back thing worked. It never has for me, but, then, I don't get stared at anymore. (The advantages of being in cosmopolitan Beijing. And of not being tall, blonde and gorgeous! :))

Oh,that's some daily events quite typical in China. And what!! Dump in the lift? Hope you didn't throw out your dinner...
I met a similar thing in Holland airport. When I walked into toilet, there is a big stinky dump on the cover welcoming me. Why someone did that?! Then I immediately quit out. Unfortunately, the fellow people thought I was the criminal, and looked at me with weired eyes. T_T

It's not just China where you can find dumps in random places though... The elevator is extreme, though while I was in Tokyo two weeks ago there was a big dump in the middle of the bathroom floor. Couldn't someone have made it two feet further to the toilet, they had to go in the middle of the floor? I also distinctly remember old women taking a squat on the sidewalk of a public road in the middle of the day in Ho Chi Min City.

Hopfrog -that's a fierce lady indeed! :) Haha! I can really imagine her. But come on, 30 seconds... You should come to my staring-training-camp. I've become quite shameless.

anonymous -yeah, you cannot get that much for 4 yuan nowadays... a bus ticket, a bottle of water, or a crappy lunch at the uni? Although it fills me up so I am not complaining!

Pete -thanks, haha, that's great to hear. Imagine if I could turn this whole blog into a short story.. that would be great :) As for me being a lovely laowai... ehhh... naaaah, probably not so much when people stare at me! :)

flyingfish -haha, that's what I thought too! Nah, the "fancy" canteen is not much better than the regular (cheaper) one... The food is nothing special but it's not super bad either... it's OK. Fills me up! Then again, I'm not that picky. Gimme some rice and I'll smile!

As for being stared at -haha, you are funny. Actually, it is completely different in Shanghai. Over there no one cares. It's just in Suzhou that laowais still for some reason have that "exotic" thing about them that makes locals look? Or what do I know? I just know that I become their staring object every time I get on the bus. But in Shanghai I can be anonymous. Man, I miss Shanghai! :/

马麟 & 조안나 -yeah I personally don't get people that don't do their number 2 at a toilet, but obviously there are some people that don't have time to make it... Anyways, finding a dump in our elevator isn't really part of my everyday life here.... haha! thank god!

I can't understand stingy people that go on about how many euro they save a week by shopping in discount supermarkets. Then, in the same breath they mention their upcoming New York shopping trip or the fancy restaurant they tried at the weekend. It beggers belief how some people lose perspective so easily.

Oh, you also like taking public transport? Me too!! People in China don't stare half as much as in Africa though. You would be as well off carrying photos of yourself to hand to the worst offenders so that they'll stop gawking there! If staring wasn't bad enough they also sometimes get a touch in as well of your skin or hair. Drives me nuts :)