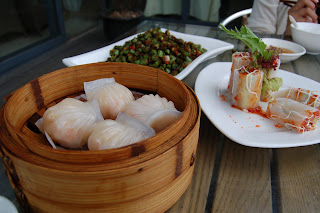 This is more like it
Last night I went to what I suppose you can call a “fancy gala evening” that I had been invited to by a Western company/organizer. It was a huge event, held at a five-star hotel with hundreds of guests (at least I realized this when I stepped inside the banquet hall). Since the invitation said things like “enjoy a night of good food” and the time was 7.30pm-late, I rocked up fresh off the treadmill and the gym, and hungry as a wolf.

“When’s the food coming?!” I heard people asking, over and over again.

“Delayed, wait!” was the rumour.

So I waited. Together with hundreds of other, likewise hungry fellas. We all waited at the balcony, while being served soft drinks and wine by waitresses.

8.15 –someone slammed the big gong-gong: “Dinner is served!”
People rushed inside to the buffet tables, only to notice that the only things that had arrived were some small pieces of chocolate, blueberry pie and green tea mouse… Still, the waitresses barely managed to put the snacks down before people had taken them all. Some guests were so hungry that they took food straight from the waiter’s trays. I, however, was not in the mood for sweets. I needed something substantial. And then I couldn’t help myself any longer:

-What is this? Where is the real food? Is there any real food coming in? I asked the waitress after 10 minutes of watching them being attacked by hungry guests.

Who on earth, in China, invites people to a DINNER at 7.30pm (prime dinner time in China) and serve them tiny pieces of blueberry pie from a buffet table? I didn’t care if there was a free flow of wine and soft drinks, as soon as I learned that there was no substantial food to eat I left, feeling hungry and quite angry.
Honestly, I cannot believe the lack of knowledge of these western people, doing something in China, inviting a lot of Chinese guest, and then serving them small sweet snacks? You would think that by now, people would understand the importance of food in China. But no, apparently not. Then again, it’s “only” 2010 –still time to learn the basics about China and Chinese people while doing business over here. Eh….

(I ended up going to a Japanese restaurant stuffing myself with sushi afterwards. Not that great, since I shouldn’t eat late when I already have troubles sleeping. But well, what to do? Going to bed on an empty, hungry stomach is a big no-no for me).
Posted by Jonna Wibelius at 7:27 AM

Hey, I think that would also look ridiculous in Europe, not only China, don't you think? :)

I can see that happening here in Canada. Dinner is at 6:00pm, so a 7:30pm start means you're not going to get real food.

They should have called it hors d'œuvres and not dinner.

I thought that people in China eat dinner earlier, like 5-6:00?

Guess food status in western culture is not as important as in China or eastern culture. Like if you have been china for a while, you will understand the importance of having a decent lunch rather a big dinner - becuz western believe food as part of social thing instead of a healthy life habbit originally. But to different between "dinner" and "reception" only requires basic english sense for the organiser - they may be just being cheeky.

@Anonymous: You use "Western" a lot. Even Chinese are very different depending on the region, so are Westerners. Maybe for you "Western" means "American", but go to places in Southern and Eastern Europe and you'll see food is equally important for us than it is for Chinese. And Mediterranean food is very healthy. It's no wonder that so many Italian and French dishes are popular all over the world.