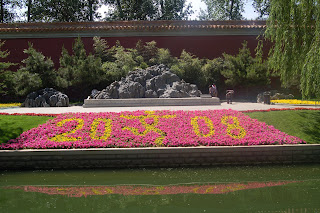 OK, I could have planned things better. Just when I got back to our flat in Suzhou, unpacked my bag, had a meal and a good night's sleep, I am about to take off again. This time, however, the flight is not as long, and I really think it will be worth while, because the time has finally come for me to go to Beijing to watch the last 3 days of the Olympic Games!!

My parents are almost childishly excited about me going. For my bday earlier this month they gave me enough 'Sweden' hats and t-shirts to dress up a whole football team. (Never mind the fact that I despise these sort of clothes, especially since there won't be any Swedes competing in the beach volley or basketball final -which I am going to watch).

From looking at the competitions going on at the moment in Beijing (watching the men's long jump on TV at the moment) Beijing doesn't even look too bad, humid and heat wise.. Right now it's raining and people are wearing surprisingly thick clothes, but apparently it's going to be sunny tomo so I don't know. I guess I'll be bringing a little bit of everything with me (clothes wise) and just hope for the best (as long as it is not as humid as it currently is in Suzhou I am happy!). I won't bring any computer so I don't think I will be able to blog, unless I find myself some Internet cafe (I'll look for one, promise!) But I'll bring my camera so expect plenty of photos online on Monday. Except for the bball and the beach volley finals I will also be watching the second last day of track and field... yey! Hopefully there will be some Scandinavian dominance in the javelin final (on Sat) which I am going to watch, so that I don't have to feel completely out of place in my yellow-and-blue clothes.

As for the bball games.. I am soooo excited. Shame it won't be Argentina and USA in the final, but fortunately I will still be able to see both teams play, since the ticket I bought for the gold game, also gives me a seat to watch the bronze game. Nice!

As for the beach volley -I don't know if I have told u all already- but anyway, the reason we bough tickets to this event is because my boyfriend argued that if I could go and watch the men's bball final, he should get a chance to watch the women's beach volley (mmm guess why...). I firgured this sounded fair and we ordered tickets. Only thing is that the tickets to the women's final had sold out so we got tix to the men's final instead. Ah! The look on my bf's face when he saw those tix. And the look on MY face?! Priceless! :)

Anyways, I should get going but I'll try to find a place to blog from. Except for watching sports I will also indulge in some yummy Beijing food and hang out with my best Beijing friend, Panda (not an actual Panda -but a Chinese girl -she got her name 'Panda' from voluntarily working as a Panda care taker at the Beijing ZOO when she was young).

Have fun and dont forget to share your experience with us.

That is hilarious that you get to see the men's finals for both basketball and beach volleyball.

You're gonna have a great time. We were there last weekend and it was the best time I've had in a long time. Apart from the sports, it's one big party down in Sanlitun and the food is tasty and cheap.

Have fun and let us know how you get on.