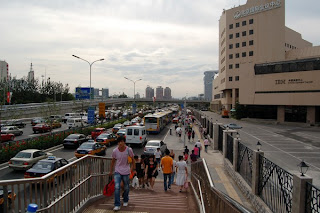 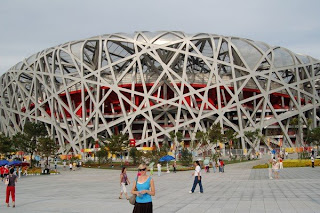 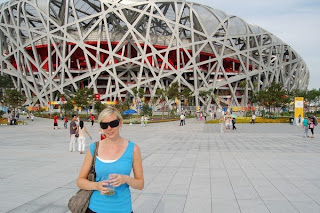 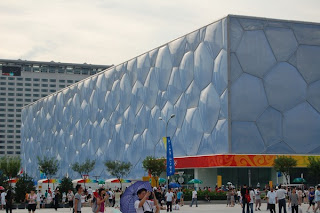 The second day in Beijing was spent walking around in a city that was waaaaaaay toooooo hooooot to be walked around in. Have u ever seen the swollen feet of a pregnant woman? Well, imagine those feet, triple the size of the feet and you'll get an idea what mine looked like. Even my bf (who doesn't believe in my: 'heat makes my feet swell'-theory) was shocked at the size of my feet and asked if I secretly was carrying around a baby. Anyways, at least I learned on thing: Must have in a hot Chinese city that you don't know so well and is likely to get lost in: soft, swell-friendly and comfortable shoes.... Next time I'll try to remember.

Around 4pm we went to the bird's nest to check out what was supposed to be a whole 'Olympic area' with restaurants, performances, face paintings etc... We got to this crowded place and were met by.... people. People. And more people. Gosh, I know China is heavily populated but lord, there was a lot of people! I guess the fact that the bird's nest was located next to the water cube made matters worse.

With high hopes we strolled off to the designated food ares that were said to have restaurants. Hm... well if your dinner normally is 2 minute noddles I guess you could say this place had 'restaurants.' They also had plastic boxes that contained an artificial looking version of meat and rice. We don't like. So we headed to the second best option which was Mc Donalds. (2 of them even, within the area!) Turned out that we weren't the only ones preferring Maccas over 2-minute-noddles: the Mc Donald's was so crowded that we first missed it completely (there were so many people lining up outside that you could barely spot the sign) and then saw it and decided that not even the most tasty cheese burger was worth lining for for hours. 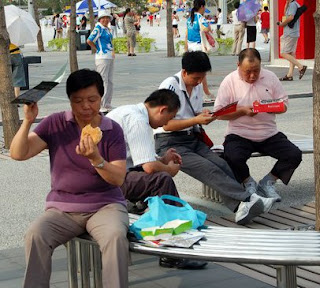 Fancy a burger? She sure did! 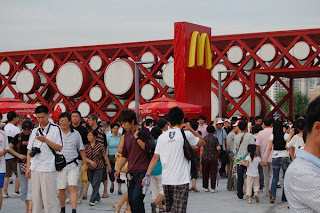 We bought some salty crackers instead and those had to do for dinner. By the time we had done all this it was already 6pm. I know, crazy huh? But the area was HUGE! And guess what else we didn't find (except for tasty things to eat): well, face paintings/people selling flags etc... In that huge area, there was only 2 stalls selling Chinese/Olympic/Mascot flags (MASCOT FLAGS?! What the h****). We were deeply disappointed. Sure, my bf looked quite geeky in his 'FINLAND' shirt and I didn't look too fancy either in my 'SWE' cap... but that's the whole point with the Olympics, right? And this night some Scandinavian athletes were actually competing, so we wanted to go 'all in' and dress ourselves in as much crap as possible (and maybe end up on television. I had promised dad I'd have a serious try at it and he had promised he would be watching). But since we found nothing of that, we had to take our seats looking ordinary. Shame!

Fortunately (?), though, we had been seated in between a Finnish crowd and a Bahamas crowd and during the night's competition everyone bonded, exchanged flags, photos and phone number, so it was all good. The Bahamas people learned everything they needed to know about Finland and the Finns learned that you don't have to down 15 beers in order to scream, cheer and have fun at the games. 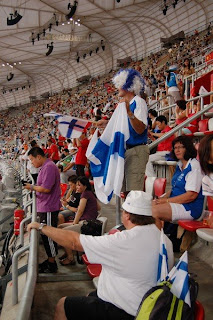 Unfortunately the Swedes (Emma Green in high jump and Magnus Arvidson in javelin) did quite bad and didn't stay in their competitions for too long. The Finns, on the other hand (and there were 3 of them in the javelin final), threw like true vikings and were all placed in the top 6. No one threw as far as Noggy boy Andreas Thorkildsen, however, who made a new Olympic record and also won the gold when he threw a bit over 90 m. Although Swedes are normally very competitive (read: jealous) when it comes to Norway, this night I forgot all about it and chanted 'NORWAY, NORWAY, NORWAY' as if I was a Noggy myself (It's the Olympics, it makes u do stupid things, okay?! Also, this Thorkildsen guy is quite a hottie). The Finns were quite disappointed when their javelin here Tero Pitkämäki (try saying that name fast, 3 times!) only got the bronze, but the Bahamas guys helped them to cheer up. 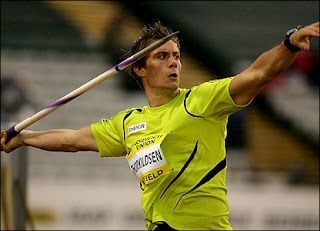 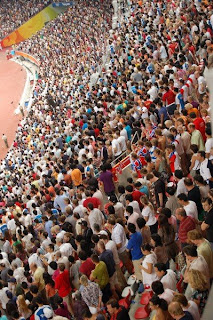 Then came the men's 4x400 m relay final and it was time to go bananas with Bahamas.... which we all did. Especially halfway through the race when the Bahamas runners managed to recover from a bad start and challenged the US. They didn't hold all the way, however, but won the silver! Our little crowd started dancing and singing of joy until a group of Olympic volunteer workers suddenly appeared with worried expressions on their faces, asking us all to 'calm down and please return to our seats.' I thought I was hearing things wrong, because excuse me, but at the Olympic Games you shouldn't be 'calm' should you?! You shouldn't just sit down should you? You should cheer and smile and have as much fun as possible, right?! Gosh, these joy killers! We made their night quite sour as we all refused to sit down and kept dancing and singing. Sure that they want their games to be safe and sound but come on, we had already gone through bag's checks and metal detectors: RELAX! After this little incident at least I understand better why the Chinese crowds in the audience were so calm and sat down the whole time. They probably only did what they were told to do. 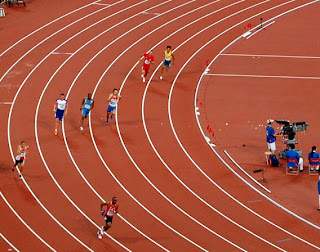 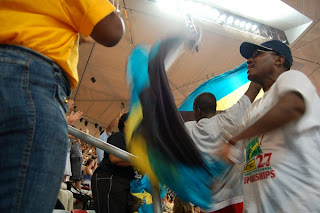 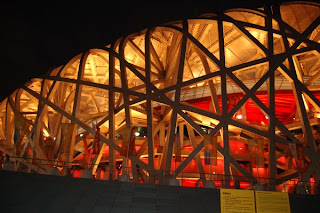 Posted by Jonna Wibelius at 9:01 AM

Once again, I enjoy reading your posts and also the photos are great. It is interesting to see the "everyday" photos from around the Olympic venues.
Regards,
Geoff (Australia)