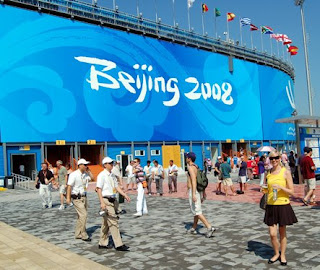 Outside the beach volley venue at Chaoyang Park.

I tried using my bf's iPhone to blog from Beijing, but as you might have figured out, it didn't work so well. Anyways, I am back in Suzhou, and boy, have I got stories to tell or what?! I will probably spread the 'Olympic experience' over several blog posts so that I don't bore you with one long Olympic 'ra ra.'

But where do I begin?! The competitions? Awesome!! (That basketball final beats anything I've seen!) The venues? Impressive (although I first called the 'bird's nest' the 'bird's shit' I changed my mind as soon as I saw it.. It was really cool, especially by night!). The crowd? Hm... mixed! I wonder if Chinese are ready for big sporting events? The 864983624986298462984623 (++++++) volunteers?? Friendly joy killers... (I'll explain more later!) The security? Not over the top. We had expected it to be quite strict. And it was. But it would have been anywhere I believe? And all in all I have to say things ran smoothly... The food sold at the venues? Quite disappointing. The toilets? Everything from disgusting to clean.... The sky? Everything from clear blue to smoggy. The heat? Close to unbearable.... All in all: I had a fantastic time!

But OK, let's start with the competitions. Like I wrote before, we were there to watch beach volley, bball and athletics.

The beach volley was up first and had an early start on Fri (Aug 22) morning, namely 9am. This obviously was waaaaaaaaaay to early for a majority of the audience, or, they were simply not interested in watching the bronze game between Georgia and Brazil (well, more like: Brazil and Brazil seeing that the Georgians were in fact 2 Brazilian guys), because the venue (located in Chaoyang park) was half empty! I was both surprised and disappointed at how little people rocked up to cheer for the teams. The atmosphere was a bit lame to start off with, but eventually more people came and things got a bit better. This didn't help the Georgians, however, who struggled from the start against Brazil and were defeated only after 2 sets. Not even close to exciting. (I had expected it to be a bit more competition for the bronze, but well...).

Something that apparently was more exciting, and set most of the guys in the audience clapping (and me thinking: "are we still in China?!??!") were the venues hottest things: the beach girls. The beach girls were a bunch of tall, slim, model-look-alike-female-dancers who entertained the crowds in time out and breaks. My bf was over the moon. (If I wouldn't have confiscated the camera from him we would have had 380 shots of steamy dancers in blue, red and green bikinis, and none of the athletes). I was moderately entertained, although I have to say they did a good job, constantly smiling and jumping around (I got tired just by looking at them. Gosh, I really have to get into my gym routine again!). I guess they were more exciting to watch than those two "Georgian" players who seemed to be fighting with each other during the second set? Anyways. Beach girls at beach volley. Makes sense. All good. 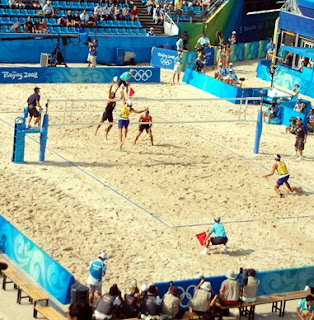 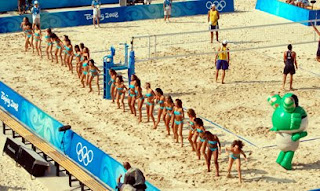 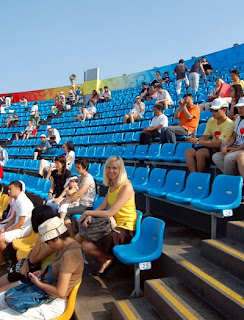 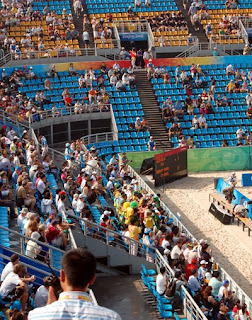 Lame turn up for the bronze game.

Since the bronze game was over almost before it started (yup, I am not exaggerating. It was as quick as dull!) we decided to kill some time by filling our empty stomachs. The list of food offered for sale didn't look too promising but the fact that the prices did made us decide to remain in Chaoyang park and eat while we waited for the 11am gold game to begin. This turned out to be a quite bad decision. The food available at the venue was everything but tasty. How about some 'bread' (meaning: chocolate muffin-like, sweet bread?)? Sausage (plastic fantastic, looked and tasted disgusting!)? Half melted snickers bars? Cakes? Biscuits (in fact: oreos)? Popcorn? Crisps? Or ice cream? Nope, there wasn't anything substantial (or tempting) to eat, so we decided to skip all that and headed for the more price worthy option: BEERS! For 5 kuai (!!!) per small bottle, this was a true treat, and also, the best tasting thing in the park (and with 33 degrees in the air it went down well!). 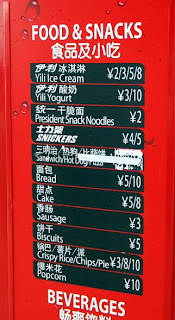 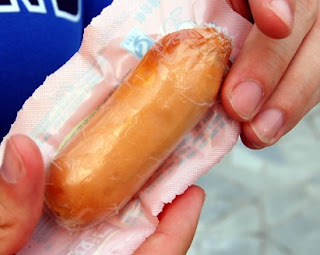 May I tempt you with this plastic sausage? 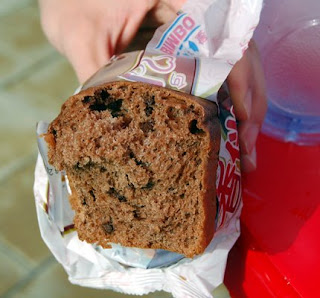 The gold game, between USA and Brazil, was much better than the bronze game. The first set was even (US won), and so was the second (that Brazil won) so we were quite excited when the third set started... The third set, however, was so quick that we barely had time to finish our ice creams. The US dominated the set completely and won a quite easy victory and the gold medal. By this time the crowd had grown both bigger and better and the atmosphere at the venue was great. The beach girls kept delivering dance moves and the commentators were above expectations. Only complaint is that it was so hooooooooot and our spot was right in the sun. We got completely burned (we hadn't even thought of bringing sunscreen. I never thought the sun would show in smoggy Beijing? But it sure did! And it sure showed on us later that day!) but that's no one's fault but our own, so all in all: a good sporting event!

Once the game finished we grabbed a cab (it took some walking and some waiting but actually, traffic wasn't that bad, cars seemed to stick to the rules and the roads were notably less jammed, making taxi drivers smile) to the city centre and spent the rest of the day chatting with other spectators, drinking beer (none as cheap as at the beach venue, however), sweating in the sun, getting a bit lost, trying to read some 'Olympic map' that didn't make any sense at all, taking photos and meeting a friend for dinner. All in all: a great (but hot!) first day of the games. 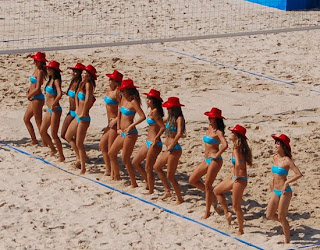 Can't get enough of those beach girls... 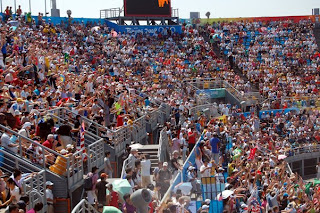 Better turn up for the gold game. 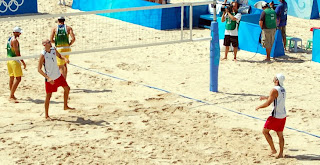 Gold game: USA vs Brazil.
Posted by Jonna Wibelius at 9:51 AM

I tried to spot you on TV, but could not see you. Next time, you need to wear something outrageous so you'll stick out on TV...

The empty seats was definitely a surprise since everything was suppose to be sold out. I tried to book tickets, but there were none left! So I ended up not going *sigh*

Anyway, sounds like you had fun, I wish I was there...

Can you post a picture of you with bikini on? Let us see how much gym work needs to be done in order to kick those beach girls ass.

Thanks Jonna for taking the time to post your latest text. I do enjoy reading about your Olympic experiences.
Regards,
Geoff (Australia)

I look forward to more stories!
Pity about the food, it really does look awful.
You look great in the photos....as nice as the beach girls!

Pingu -I WAS wearing something really ugly... check next post... :) Although I guess I wasn't outrageous enough. I was actually a bit disappointed that they were not selling funny hats, or flags in the olympic area. Not even face painting?! (Although I have been told there was? But WHERE?!). I guess I should have geared up more (read: brought viking hats, Swedish flags, wigs, etc) form home... Next time!

Thanks Jonna for the reply.