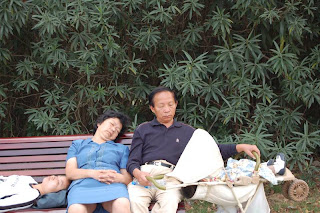 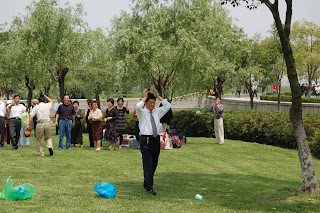 
Something I have noted about Chinese people is that they really love hanging out in parks. In fact, it seems to be one of the wknd highlights to many (I bet if u would ask some of those park people to choose between the pub and the park they would all choose the park), and it’s not like they come there alone… oh no, here we are talking family, friends, babies, dogs, rabbits (?), and neighbours. Wknd get-togethers in parks are essential, and, actually, quite fun to watch? You may not think so, but just have a think about it…

Then I started thinking about what me and my friends/family (back in Sweden) do for fun in parks (or garderns that are popular choices since many here are lucky to have em)... well. We like to play a Swedish version of softball or another game called 'KUBB,' but these sort of game often involves drinking a lot of beers. Then during midsummer we put up this stupid, big, flower-dressed midsummer tree, drink ourselves silly and jump around the tree pretending we are little frogs (This might not sound appealing –but trust me, many people find each other over a frog-jumping-session. Nine months later Sweden has its yearly 'baby boom' period....).. Sometimes we also sing. Or yell. And play 'tag.' And drink some more. And I guess you could say that some people also ‘sleep’ or ‘take naps’ in parks…

After thinking about this I realised that we are not that different after all. We just have different ideas of 'park fun.' After this summer in Sweden I am actually not sure what kind of park I prefer… but the thought of flying a kite and being far away from a beer is actually very appealing.

Tomorrow I am flying back to China! Yey -I cannot wait!!! 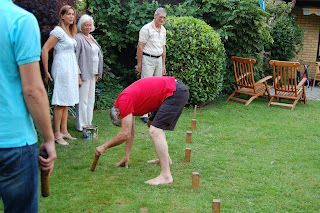 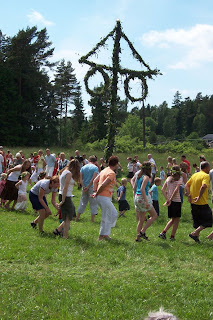 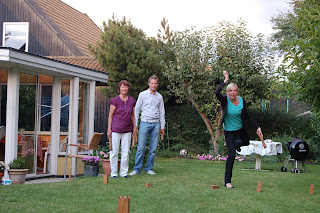 KUBB throw
Posted by Jonna Wibelius at 3:32 AM

I love playing Kubb- it was spread to me in Atlanta by a Swedish grad student in my lab. Perfect park/drinking game.