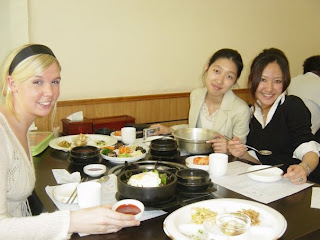 Me and 2 classmates about to dig into some Korean bobimbap. Yum! 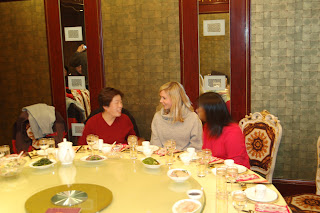 
If I had to recommend a university for someone who's interested in learning Chinese in China I would recommend Suzhou Uni. Sure, Suzhou might not be as much fun as Shanghai, but the quality of teaching at the uni is much much better than at Jiaotong and Shanghai uni. I came to Suzhou uni in the beginning of this year, hoping to do well enough in my test to get into Mandarin level 3... The writing test was (as usual!) a disaster, I don't know why, but I just forget characters way too fast for my own good (anyone else who has the same problem? I suppose I should be reading characters every day in order to not forget them.. but well... It hasn't happened yet, especially not since I am on a holiday!) but the speaking test went OK and the teachers told me I could go into the Level 3 class (yey!), gave me three thick books and told me to come back next Monday.
Class started (only morning lessons -yes please!) at 8.30am the following week and the class I had ended up in was HUGE. Except for me (the tallest and blondest person in the classroom -I was the highlight for about one week then people got bored with me when they realised that my length or hair didn't make me any more special than them. Also, the novelty of being from Sweden -the only student from Sweden at the whole uni- also wore off. And I gave up when it came to explaining that Sweden wasn't the same as Switzerland, that we don't speak English in Sweden -but Swedish- and that 'ABBA.' 'IKEA' and 'Volvo' all originates from Sweden), student were from South Korea, Japan, Indonesia and then there was one Brazilian girl. We bonded instantly over the character-misery. I think that's unavoidable.
The selection of classes at the uni were a bit different to what I am used to. Normally you have three different kind of lessons: listening, speaking and reading&writing. At Suzhou we had: speaking, reading&writing (or more like: grammar class), TV/listening and Essay writing, the latter being a minor tragedy for me from beginning to end (like, seriously... how on earth am I supposed to write ESSAYS in Chinese?! That doesn't make any sense at all!). Although our class was huge for the first 2 weeks it later calmed down a bit. People started dropping out. Also, South Koreans seems to have a thing for sleeping in, because they often skipped the first class and came to school around 10am.
I have never had a better semester at a uni -finally my Chinese was good enough (or OK, no.. good is not the right word, coz my Chinese is FAR from good. But my vocab was big enough!) that I could speak to my classmates about more than what they had for lunch and dinner yesterday. Sure, conversations were still a bit limited, but trust me, after a few beers we could talk about almost everything! :)
The best thing about Suzhou Uni, however, has to be the teachers. They were all so friendly, helpful and encouraging. I mean, at the end of the semester I even got a diploma for being a student who had developed extensively throughout the semester (the fact that I didn't understand that it was a diploma but thought it was a paper telling me I should pay more money to the student office -something about uni and visa fees- is another story. My teacher was nice enough to clear it out for me...). I really had a wonderful time at Suzhou uni, and I am looking forward to take on Mandarin Level 4 at the same uni in the beginning of September.
Posted by Jonna Wibelius at 2:30 AM

How was the placement test for writing section looks like? Did you need to write an essay or placing paragraphs and grammar into the correct sentences?

Cheers and Have fun in Suzhou!

Hiya, I barely remember the writing test as it was more than 1 year ago since I took it... but it started off fairly easy and then it got harder and harder (it's like, first u should fill in the blanks for 'level 1 questions' and then level 2, etc etc...). I did quite badly on my written test because I had forgotten so many characters by then and also, I am not great when it comes to writing... but I saved myself during the spoken exam part and convinced the 2 teachers to put me into level 3 still :)

But to answer your question: no, u don't have to write any essay. It is more fill in the blanks, write the character for a certain pinyin, put words into the right order and such. not rocket science in other words! If u know ur stuff I bet it is quite easy.