"Fight" for your right to be polite 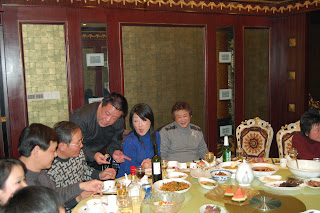 In China you have to “fight” for many things. When at a restaurant with some Chinese friends at pay time, for instance, you have to fight for the bill. You have to play this polite “bill game”:

….until that one person who’s supposed to get a treat eventually (but reluctantly) gives in. It’s all already made up, but you still have to put on this show in order to show good character.

Then there’s the whole “哪里哪里，nail nail” “不敢当 bu gandang” (= polite ways to brush off a compliment), “oh no no no!” thing going on, that you should engage in (in order to be polite) every time someone gives you a compliment:

-Your Chinese is really good!
-Nali nail! Not at all!

-And that’s a wonderful dress you are wearing?

We all know this, and it’s cool. I don’t necessarily like it, but I’ve gotten used to it (I actually do it in Sweden too, which is driving my friends insane: “Geez Jonna, can’t you just say ‘thanks!’ when I tell you that your jacket is nice? You don’t need to tell me it is old and that it was real cheap and whatever. Just say thanks for crying out loud!”).

One that should not be forgotten is when you visit a Chinese friend’s house and s/he asks you what you’d like to drink. The answer is given:

(Although in real life you are dying for a coke).

S/he’ll still present you with a drink and you’ll reluctantly accept it.

OK, so so far so good. I can do all this. In fact, I not only can, but I DO all this. Every day, more or less (especially the bill-war and the “nail nail!” I don’t visit Chinese people’s houses too often but when it happens I politely behave accordingly)

What occurred to me yesterday when I was on the bus, however, made me realize that the bus is yet another place where you have to push a little bit extra in order to see your polite behaviour pay off.

There I was, sitting comfortably at my seat when an old lady walked on the bus. There were no seats left so she had to stand. My heart melted when I saw her and I got up, tapped her on her shoulder and told her to take my seat.

-Oh no no no! She replied (although her old face broke into a huge smile. I don’t know if it was my offer or the fact that I was a laowai that she liked the best).

-No no no! I am getting off real soon! Actually I am getting almost straight away! I don’t need to sit, but thank you, thank you!! She said, and waved me away.

For some (stupid) reason I decided to believe her and sat down again, feeling the eyes of every single passenger of that bus being on me. Not quite sure what I did to deserve that kind of attention, after all, it is quite normal to offer old people your seat.

However, soon I realized that maybe I should have been a little bit more persistent with the old lady, and not only settled for her: “oh no no no! I can stand” –reply. Because, this lady did not get off the bus “immediately” like she’d told me she would. Instead, she stood clinging on to a pole for the whole ride, and got off only a few stops before me. I felt so bad when I saw her almost losing her balance every time the bus turned (those buses are real crazy over here. Do buses don’t have to follow speed limits in China?).

Then when I got off I realized that maybe you have to engage in the same sort of “nagging” conversation in order to get an old person to take your seat? Maybe I should have simply gotten up, told her over and over again, and eventually gone to stand somewhere else, leaving my seat free for her? Well, I guess next time I have to try that. I have managed to give my seat to old people before, but at first they always try to tell me they don’t want it, and then they laugh and smile (probably because I speak Chinese) but I still feel like a winner when I see them sitting down. Anyways, I guess the bus is yet a new place where you have to engage in over-politeness in order to get through. Because even though they are telling you “no no no!” what they really are telling is is “sure, OK, if you just nag a little bit I’ll take it”… right?!

Posted by Jonna Wibelius at 8:05 AM

When we go out for family dinner, we engage in this meaningless activity all the time. D:

Take my compliment, say 'thank' rather than 'nali, nali'. haha.

True! But how do you get people to stop nagging you when you really don't want whatever they are so politely trying to give you?

It's a large country, you always find someone over polite like the lady you encountered on bus, or totally shameless person like me--I never play polite on the dinner table.
About the bus speed? Well, in Suzhou it's actually fine. Next time you may try WuHan's. It's said: bus chasing cab is not exciting, bus chasing bus is.

haha! its a little like that too here in the philippines although we don't argue that long or as hard.

Reminds me of that time when I tried to go dutch with the bill and my ex-boyfriend was totally insulted and finally insisted on paying! I thought it was ridicule but I was happy not to have anything to pay!

Thanks for the "heads up", Jonna, as I really had no idea that the culture required that much negotiating just to show some kindness to someone. Interesting!

Be careful! I just heard from my mom that some crazy ass buses in China killed a bunch of people because of the icy roads due to the winter storms.

Hehe that is so true. I remember the first few weeks when I was studying in Beijing I kept getting confused because people kept saying no when they really meant yes!

By the way, just wanted to say I've been following your blog for a while, and I really like it. It has inspired me to start my own (http://asiannie.blogspot.com/) as well, first to recall my year spent in Asia; and also, because I'll also be moving indefinitely to Hong Kong in 6 weeks (while it is not the main reason, I cannot say your blog did not influence my final decision on this regard! ^_^ )., so I thought I would write about my experiences too.

Anyways, take care Jonna and keep up with the good work!

I live in china for 10 years. A chinese lady commented that in the USA no one is polite. Everyone pays his/her own bills at the restaurant and no one invets anyone else...

pingu -maybe next time u r having the fight u should ask each other: "why are we doing this?!" Because u already know who's going to end up paying the bill, right?

Anonymous -hahahhaha, I would love to say thanks but it feels so wrong... "哪里哪里阿， 我中文没有那么好。(I think I'm damaged forever?)

Nicki -yeah good point. I haven't figured that one out either. Hence why I have ended up with numerous drinks at people's houses that I don't really want... But I still drink them to be polite :)

马麟 -never play polite?! yeah, I guess there are all kinds! :) The Suzhou buses are enough for me to handle at this moment, thanks!

Lianne -yeah, totally different culture compared to where I am from. If someone over there says: "It's on me!" everyone else goes: "ah, that's so kind! thank you!"

Kanmuri -when people get seriously offended I get a bit scared... But yeah, it really is a big thing here. The host is supposed to pay!

Carl -it is interesting! I never realized how many things are really like this over here until yesterday on that bus when I started thinking about it. Chinese culture is really interesting indeed.

Anonymous -sometimes when I take taxis I tell the drivers to drive slower... I am not sure it would work with those bus drivers though... Fortunately there are rarely ice on the roads in SZ.

Annie -ah that is so nice to hear! I am happy that u have started your own blog! I'll make sure to check it tomorrow! Moving to HK huh?! Exciting! I hope it all goes well! I might also make a move in the near future.. let's see!

Jose -yeah that sounds like Sweden.. No one pays for anyone but themselves simply because it is too expensive to treat others.

MKL -I guess I should. OK, next time!

It is an interesting experience to read your blog even for a Chinese, those little things I will never notice if they weren't pointed out.

Don't know if you noticed but you've written "nail" instead of "nali" a couple of times in your post=P Love your blog by the way - you're a great writer!

Maverickml -that's great to hear! just what I am aiming for. I don't want to step on anyone toes, rather just point out differences.

Anonymous -whoops, thanks for pointing that out! Sometimes these posts are created in a bit of a morning rush... ;) Thanks for the compliment. Having someone tell me they like my writing makes my day! :) I love writing!

Same in Burma, where I once lived. I asked a Burmese friend the reason. He said it was so that the receiver of the gift/favour wasn't placed under any obligation to the giver - to take a gift creates a patron-client relationship, with the obligation to repay the gift at a future date. The haggling establishes that no such obligation exists.

What a great resource!