The art of picking up 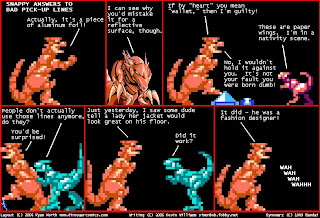 It’s not a secret that not-so-good-looking Western guys can (and often do) pick up Chinese super babes. And why? Well, because for Chinese girls, dating a westerner does not only give you high status; it may also be your ticket out of China.

So while a lot of not-so-hot-guys come to places as Shanghai as more or less virgins, they soon get into the vibe, not to mention the bedroom stuff, and as a result, Shanghais is full of over-confident and superficial losers!

Some months ago I was shaking it at the nightclub Attica, near the Bund in Shanghai, when a western, short dude with curly hair approached me together with his friend. They didn’t even bother to introduce themselves, instead the curly guy yelled into my ear:

-You live here?
-Yes!
-Cool! So do I! Shanghai is aweeeesome! (I could hear that he was American). This is my friend! He pointed at slightly taller, western guy that was standing a bit behind him.
-He is an actor visiting from the US, he continued. He is here shooting ‘the Mummy 3!’
(THE MUMMY 3!?!?)
-I didn’t know there was a ‘Mummy 2’ was all I could think of to say.

I think that the guy sensed that the actor approach wasn’t really doing its magic on me, because suddenly he said:
-You know, you’re quite pretty! And I really like your hair and your innocent look (“my what??!”) But there are many pretty girls in this room. Can you give me three reasons why I should continue talking to you and not go to someone else?!

I just stared at him, mouth wide open. What the hell?! Can I what?

-You know baby, give me your three best qualities!

I continued to just stare at him. But he ignored me and went on.

-I can help you our and tell you what I am looking for. You see, with ladies, I look for three things. One is sexiness, one is confidence and one is body! And guess what? You have TWO out of these THREE!!

With that, him and his friend did a ‘high five’, gave me two superficial, yet encouraging smiles, before they continued on to the next girl.

While I starred after them, all I could think of is that how sad it is that those two losers will probably not sleep alone tonight.

PS. Any girl who has slept with this Mummy 3 actor: I am very disappointed of you!
Posted by Jonna Wibelius at 8:57 AM

haha.. funny :) asian countries are so awesome. when I went to Taiwan and Japan I felt like a superstar and people came up to me touching my blonde hair and stuff. being European and particularly Swedish IS very exotic ;)

While it's true that a lot of losers from western countries rush to asia to find themselves super babes (these poor asian girls honestly can't tell these guys are ugly) i think the american who tried to pick you up wasn't egotistical because of falsely inflated ego.

Some american guys are just like that. It's a saaad saaaad truth. He THINKS his cockiness is filling you with the desire to please him but in all honesty, he's just being annoying.

BTW. he used a well-worn pickup line on you. *SIGH* ^^;;; some american guys *shakes head*

yeah, ok , you write in english but you sound too american jonna

brisi - I do? Well, as long as I don't sound too Swedish I'm totally happy, so I'll take that as a compliment :)