I am going to the Olympic Games!! (or okey, I THINK I am going!) 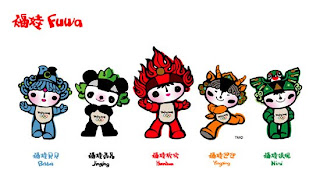 Long before I even moved to China I knew that I wanted to go to the 2008 Olympic Games in Beijing.

And now I am one step closer!

We’ve finally ordered tickets (from Europe, it was waaaaaaaaaay too troublesome to order from China! And I simply couldn’t stand the suspense of all those lotteries) and in one week we’ll find out of we get them or not.

A VERY annoying and stupid thing about ordering the tickets that I really hope they change for any future game (just in case Jacques Rogge is reading this?) is the fact that if you sign up for, let’s say, the cheapest seats to the track and field and they have sold out, you have to be ready to pay up for whatever tickets available. Meaning: even though we ordered tickets for 24 euros we might have to pay 100. Sure, I can understand the thought behind this (they need to sell those expensive seats too), however, what if we end up with the most expensive seats to every competition?! Gah, I don’t even wanna think about that! (And neither does my bank account!).

We’ve ordered ticks for swimming, diving, track and field, the men’s basketball final (a pure treat for me, I am a old bballer! Played since I was 12!) and the women’s beach volley final (a treat for my boyfriend, and no, of course he hasn't played before. He just wanna check out the chicks). We wanted to get tickets for the soccer too but the cheapest seats were 50 euros so we decided to watch that one from a pub instead.

So in one week, once our tickets are secured, I guess the rest of the madness starts: getting flight tickets and booking a hotel. I am kind of worried about both. If no flight tickets are available I suppose we’ll have to catch a train. However, you cannot pre-book train tickets in China: the earliest you can buy them are 9 days before departure. NINE DAYS BEFORE DEPARTURE??!?! That’s insane? I am going to get a heart attack if I have to wait until 9 days before my planned journey to know if I am going or not??

And if we don’t get a hotel.. hm… yeah well then… hm… I don’t know?! Anyone got a spare room for rent during the last weekend of the Olympic Games in Beijing? Feel free to email me: jonnawib(at)yahoo.se (But note, that I ain’t no mega rich ‘lao wai’…)
Posted by Jonna Wibelius at 4:38 PM