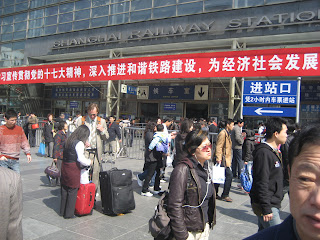 We had a quite interesting train ride the other night.

Me, mom and my brother Joel had tickets to the 8.20pm train from Shanghai to Suzhou. I had bought the tickets as late as 6pm the night before, in Suzhou, so there weren’t that many seats left anymore, and we all had to sit in different train coupes (Mom was in coupe number 13, I was in 3, and Joel was in 1).

At the platform we went to our different coupes and I found my seat. Soon a Chinese man came to sit between me. Then suddenly another Chinese man showed up and asked me to move. I showed him my ticket and imagine my surprise when he then showed me his, and it turned out we had the exact same seat number and train coupe on our tickets! Only difference was that he was going to Changsou and I was getting off on the way, at Suzhou. The fact that we had the same seat on our tickets caused a stir in our train coupe. Everyone around us got involved and at least 5 people offered their seats to either me or the man. The man, however, refused to sit, and then our two identical tickets started to circulate around the coupe, with people comparing them and discussing which one was fake and which one was real, and I had to describe where I had bought my tickets, what I had paid for it, and so on. Old as young, no one wanted to miss out on this drama and I received sympathetic nods and smiles from different corners, meanwhile the standing man got some gibes about his ticket probably being fake. (No one believed that I had a fake ticket). I was watching the drama unfold thinking to myself that ‘thank lord it was me who was in this coupe and not my mom or brother. They would have never been able to handle all this with their language limitations’.

Anyways. When the train 30 minutes later arrived in Suzhou the man could take over my seat and everyone had calmed down a bit.

I met up with mom and Joel in the taxi line, thinking I had some story to share, when mom went:

-There was a Chinese guy on my seat.
-Mine too! Said Joel.
-Mine too! Said I, startled.
-Yeah but no wonder. I cannot believe you managed to get us the wrong tickets, mom went on.
-Wrong tickets?
-Yes, these tickets are for the 20th, but today is the 21st.
-Oh….!

As it turns out, mom and Joel had had adventures on their own. Joel had arrived to a seat where a family was eating their KFC dinner. When he showed his tickets a minor hysteria broke lose in the coupe and although he insisted he could stand and started walking towards the end of the coupe, he was gently pulled back and pulled down at the seat, leaving one family member standing.

Mom, on the other hand, was the only one who ended up having to stand. We she arrived at ‘her’ seat, a Chinese man was already sitting there. When she showed her ticket he glances at it, quickly confirmed that her date was wrong, and left her standing outside the toilets for the whole train ride. I cannot believe that out of all the people, including ourselves, that in total viewed our tickets during that ride, he was the only one who bothered to look at the dates!

Anyways, it was great to laugh about it afterwards. I don’t think the tickets office purposely sold me tickets for the wrong night, however, in the future I will be a bit more careful with checking the dates on my tix! 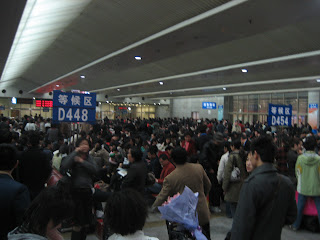 A crowded Shanghai railway station
Posted by Jonna Wibelius at 8:27 AM

That is really funny! Goes to show how for the most part native Chinese still look at foreigners in awe/admiration. I feel like especially in cities people tend to treat American tourists nicer (at least to their face) than Chinese tourists.