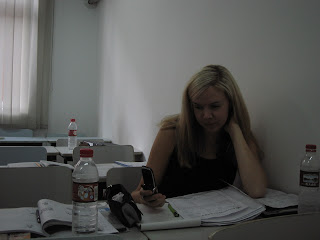 Looking forward to all the hard work at the school bench paying off..

I had a real 'ah-I-am-in-China' feeling already when I stepped on the plane in Helsinki and found my seat (and the seat next to mine) to be already occupied by a young Chinese couple that had made themselves comfortable. Despite the fact they had already drank what was supposed to be my water, and used 'my blanket' I couldn't help smiling. (People taking my seat is the standard I have gotten used to every time I take the train from Shanghai to Suzhou)

-Sorry guys, I said in Chinese. I think you're on the wrong seat.
-Oh no it cannot be possible, said the Chinese guy in English.
-What's your seat number? I asked, still in Chinese.
They took out their tickets and looked. When they realised I was right they literally jumped from their (or mine) seats and apologized about 100 times (in Chinese now). Once they started moving their computer games, IPhone and snacks to their actual seats the guy started chit chatting about what I was going to do in China, where I lived etc, since I obviously knew Chinese (Something I got a lot of compliment for).

We chatted for a bit and I got approving nods from both him and his girlfriend for the fact that I was from Sweden (they had just visited Sweden and said they loved Stockholm). When we stopped chatting I put my bag in the luggage space and looked around before I sat down. I must say I was surprised to be met by approving looks from all the business-looking men seated all around me. Even the guy who was waiting to sit down next to me, gave me a huge smile and almost immediately asked me where I had learned how to speak Chinese so well, saying it was impressive to hear.

Ahhh... I get it. All those people going to China -not knowing any Chinese at all- hearing me speak to a Chinese couple, thinking I am fluent? I can't help it... I love it! (Never mind the fact that the conversation I had with the Chinese couple was very basic). Just give me another 1.5-2 years or so or I will 'deserve' those impressed looks.
Posted by Jonna Wibelius at 11:32 AM

It's always nice to receive compliments when speaking Chinese or so I thought.

I was told by several Chinese friends here in Xiamen, that the Chinese will compliment you when you are first learning to speak Chinese as encouragment for you to continue speaking Mandarin. After a few years of speaking or when you become more fluent, they feel the need to criticize your Chinese.

Can't wait for that day!

Good on you! I'm jealous - I should really be much better at Chinese as I have a "live in " teacher, my wife.