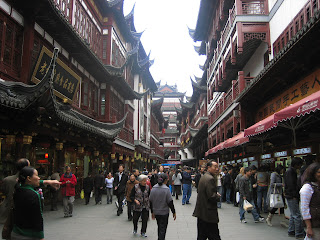 After today's classes I am off to Shanghai to see my cousin who is in town for the day. One of the things I love about (almost) living in Shanghai is that u get to see a lot of people that u normally wouldn't see, as there are a much bigger risk they will pass by a big city like Shanghai (for work, obviously, but there are always a little bit of time for play) than a small Scandinavian town like Tampere, where I lived before this. My cousin is an excellent example. She's from a small island in Sweden called Gotland (although now she lives in Stockhom) and since I am from the very south of Sweden, we haven't seen each other for.. hm... let's see now... 15 years?! Yeah, quite bad, huh?! (I was so small when I last saw her I don't even remember what we did... so in a way this is like meeting for the first time again) I guess me having lived abroad for the last 7 years hasn't helped either, but anyways, now she's in town and I have about 4 hours to explore what seems to be like a rainy city (it's pouring down in Suzhou and I am guessing Shanghai is the same?) before she has to head to the airport to catch her evening flight. I think four hours gives us just about time to do nothing, but I suppose the main thing is to head to some cozy little cafe and catch up on what the other one's been doing for the last 15 years.

Ps. Speaking of being in town for just one day.. I get a lot of emails from people who, just like my cousin, is passing by the city and wants one-day-in-Shanghai-advices so that they can make the most of the day. I will therefore write a 'one-day-in-Shanghai' post sometime after this wknd.

Posted by Jonna Wibelius at 7:28 AM