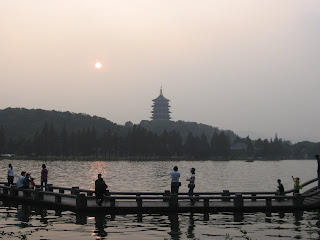 Although our main reason for travelling to Hangzhou was to run the Sunday race, we also had half a day (on the Sat) to explore the city. And I have to say I was positively surprised about Hangzhou. I have heard from many people that it's 'just another Chinese city'/'Quite similar to Suzhou' but I didn't feel that at all. I found Hangzhou to be a hip but friendly little hub... almost like a mini-Shanghai, but with nicer/less people?! Also, it was actually quite nice to be in a city that wasn't packed with foreigners. No offense to foreigners (I am one myself!!!) but I don't know.. it just felt a little bit more Chinese.

Since we are quite terrible when it comes to travelling (we never prepare anything, we never use a guide book, and rarely a map) we spent the beginning of the day being lost. Although there's a charm of being lost to.. as u often end up on streets u would never walk on otherwise. (Don't ask me where we went however, coz I have no idea). After about 2 hours of walking we managed to locate the city's main shopping area, which had all the usual shops (even a Zara!!! When is Zara going to make it to Suzhou?!) and a lot of trendy looking Chinese people. Even though I barely saw any other lao wais that very day, there wasn't much of the 'alien affect' going on (meaning: We weren't being stared at... which was lovely, as that is not the case in Suzhou).

One of the big malls seemed to have some sort of discount day as it was jammed packed with people so we soon deserted the commercial areas to walk on smaller, and less crowded, streets. We found a great street, quite similar to Fuxing Lu in Shanghai, only with cheaper clothes! I bought a lot of Christmas presents and if it wasn't for the fact that we had a race the next day, I would have most likely spent the whole next day on the street too. The people working in those small shops were really friendly. They loved that I could speak Chinese and we spent almost 40 min in one baby-clothes shop (my sis is preggers -and gosh, are there cute/ cheap baby clothes to buy in China or what?!?! I am going to end up giving my sis a whole closet of baby uniforms for Xmas) chatting to the old couple who ran it... It's just funny.. those two old people who couldn't speak a word of English and spoke Chinese with a heavy dialect, told us their son was living in Canada and that they had visited him several times. They loooooved Canada, and marvelled over how fresh the air was over there and how friendly Canadians were. Us being Scandinavians ("Similar to Canada, right?! At least climate wise?!" "Sure is....!" -This couple knew their stuff!!) scored us some extra points and we were told to come and visit this couple for a chat soon again. So cute! I have never had the same thing happening to me in Shanghai/Suzhou. I loved that they weren't just 'sell, sell, sell!!!' people. 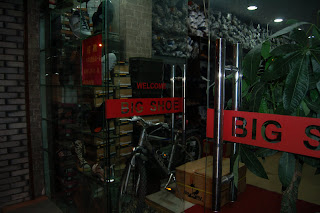 We also found a highly interesting looking shoe shop that must be where Yao Ming buys his shoes when in China, as it was a paradise to big feet fellas: selling only BIG shoes... Unfortunately we didn't have time to go in and browse (my bf was nagging about dinner) but I'll def be visiting Hangzhou soon again and then I would like to explore this big-feet-shop a bit further too. Although my feet are not gigantic they are too big to fit into most of the petite shoes sold at the small shoe shops in Shanghai/Suzhou (not to mention the department stores... they normally have shoes up to size 38 and my feet are more like a 39 during winter and 40 during summer -as they swell so much over here). 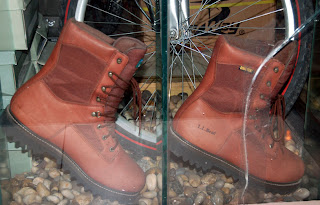 This photo isn't doing these shoes justice... they were HUGE! Yao-Ming-huge!

We didn't spend our day around the lake as we knew we were going to run there the next day, although I sort of regret that a bit now. It will have to be next time. Because yeah, there will definitely be a next time, sooner rather than later!

Oh, and a Hangzhou by night tip... The Wine Cellar in Hangzhou have glasses of red/white (mainly wines from Australia) starting from 22 kuai/glass (and cocktails for 30 kuai...)?!?!?! It's a must do!!! The food there was also good (I post-fuelled after the race with a pizza -yum!) and the staff were friendly, if just a little bit confused and lost... but in a charming way. Except for the relaxing coffee bar/restaurant, there's a wine cellar in the basement, a wine shop and a nice little garden for warmer days. For this place I actually managed to catch the address: 1/F, Zhongtian Mansion, 173 Yugu Road (玉古路173号中田大厦1楼) 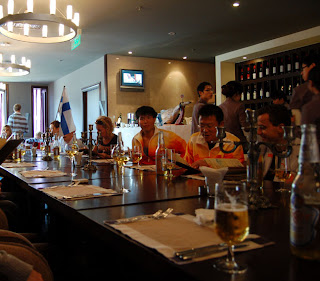 Wine Cellar restaurant (those 2 Chinese guys in the photo were from Beijing and ran the full marathon... they re-fuelled with one pasta dish each, one pizza each and one large bowl of rice each! I was quite impressed! I thought I was a big eater.)
Posted by Jonna Wibelius at 7:27 AM

That is pretty much the same feeling I gets from visiting Suzhou. Suzhou is awesome, maybe my favourite city in China. Only downside is that there is no mountains (?) around Suzhou.

Though I have never been to Hangzhou, but your post really made me want to visit it.

Emil -do u live in China on a permanent basis or do u just come here to compete? I'm so curious.....

No real mountains in Suzhou, no, but have u been to Taihu Lake? There are some serious hills, that feels like mountain when u try to run across them (the latest HHH -run took place in this area. Really nice place!).

Oh, and visit Hangzhou! It's so nice. U can choose to run/walk/rent a bike and ride around the lake. Or, seeing that u r a a professional cyclist, I guess u can bring ur own bike. The earlier in the morning the better, as it tends to get crowded during day time.

Yeah, I live in north east China. I dont like it so much though, but luckily I am not here a lot, usually traveling somewhere. But the north east is generaly dirty, cold, drunken drivers, baijiu, people scream when they talk, not developing as the south etc etc.

I lived in Xiamen and Shenzhen last year which is far better.

Ahhhh dongbei characteristics.. doing business with a lot of booze, right? Although the food must be delicious up there?! I am going to Dalian on Fri, can't wait.