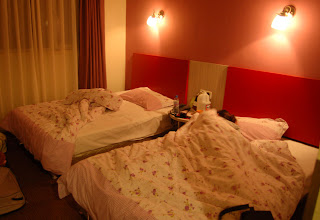 I forgot to mention accommodation in my previous post, so I thought I'd drop a line about it now. Since the hotel that we initially booked when we booked our Dalian trip suddenly became unavailable (due to renovation) 2 days prior to our departure (is it only me, or is that just 'so China?!') we had to find a new place to stay. We suggested a few hotels to our travel agency but were told that those were 'only for Chinese people' (I didn't know that rule still existed here). So, in the end we decided to settle for Motel 168. I don't know why, but I was a little bit against staying there at first, I thought it was going to be small, old and dirty, so imagine my surprise when we walked into our room and found it to be both newer and cleaner than any of the 500 kuai + hotels where I have stayed before in Shanghai (although of course u cannot compare hotel prices in Dalian with hotel prices in Shanghai..). Motel 168 was perfect! Located on Youhao Lu, (central Dalian) with walking distance to the Victory Square, train station and with a bus stop just across the street. My only complaint would be that they didn't have any hairdryer and that sort of sucked, especially during our last day when it was minus degrees and ice on the streets... Fortunately I had 5 different hats to hide under :)

But really, Motel 168 -great place to stay, at least in Dalian. I don't know if it is the same in other Chinese cities? If anyone knows feel free to share. Our room was 188 kuai/night (simply because we wanted a room with a window) and that included one breakfast. The breakfast, however, was too Chinese for our taste buds (I love noodles, rice and egg-tomato stir fry too, but not at 8am in the morning...Oh, there were also loads of cookies to choose from. And sugar sweet, white/yellow toast) but since it was so cheap to get brekkie from the street it wasn't any problem. 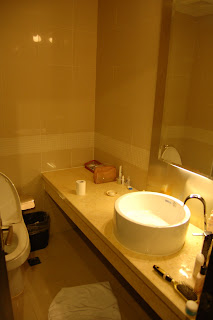 Posted by Jonna Wibelius at 7:25 AM

I think Suzhou got Motel 168 aswell, and dont forget about the sister concept, Hotel 268.

The point of the name is the price of the room and their hotels is easy and comfortable. Pretty straight forward, and I also like it that way.

I have seen the motels in pretty much every major city, and it seems like new ones is popping up daily.

Here is my Motel 168 experience.
http://blog.emilyminor.com/2007/08/2nd-failed-trip-to-australia.html

I think yours looked nicer. The one near the Pudong airport isn't so clean.

Both times I've been to SH I've stayed in Motel 168. It's real value for money.

Sounds like the Motel 168 has almost the same standard in different cities (M--e -I think the lack of flashlight might have made our room look nicer?! I'll read your blogpost later today to see what ur room was like). Great. From now on I'll be a devoted Motel-168-traveller.

Motel 168 are partly owned by the economic and competative Motel 8 chain of the USA.
So the standards are maintained even in China.
I personally had stayed in many ( no less than, on 20 occassions ),
in various cities across China, where available,
I had not been disappointed even once, in both price,service and cleanliness at Motle 168.

You just hit the Jackpot for vlue for money accomodation in China.
You can even book them online at
http://www.motel168.com/
Have a great time in China.
Nothing is impossible in China.

Third Eye -thanks for the info, I had no idea. And yes, Jackpot is the right word!

M--e -just read your post, what a crazy story.. There were no funny Cringlish signs at our Motel 168 which was kind of a shame.. I have also learnt to love those.. :)

Try also 7 Days Inn and Home Inn. The 7 Days Inn are almost always new or redone and very nice for the price (less than 200 rmb). You can book on-line.

I think when the travel agency said "they were only for chinese people" they meant those hotels did not meet western standards. Probably booked some western people in them before we complained in the way some western people can .. you know what I mean I think.