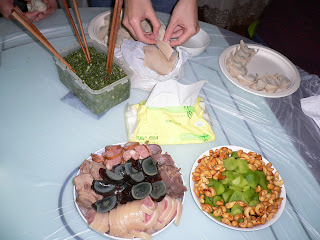 I continued thinking about the CNY during the rest of last night. I even indulged in some CNY reminiscing with my bf, as we talked about our first, very special CNY in China in 2007.

At this time, we were invited to dinner by a Chinese couple that we barely knew. The reasons why we 'barely knew' each other were mix of: 1. them not being able to speak much English and our Chinese being at a very primary level, and 2. None of us had actually chosen to meet each other. We had simply been 'set up' by my Chinese translator/friend from Beijing, who, when she heard that I was moving to Shanghai decided to take me under her wing and arranged for me to meet with her Shanghai friend Zhizi and her boyfriend Wang. Since communication was so-so, I think all four of us felt that it wasn't be biggest 'click' of all time, but we were still doing our outmost when it came to being polite and nice: asking each other out for dinner, meeting to go shopping, and so on. So, when we were invited to Zhizi's family home for CNY dinner, we accepted with joy. And, to be honest, we were kind of excited, despite the language barrier, that we were going to get a chance to experience a 'real' CNY dinner at a friend's house.

We arrived around 4pm on the big day and was greeted by Zhizi's mom, dad, grandpa, grandma, and a lot of other old people walking around in underpants and big sweaters. They were all really sweet even though they didn't speak a lick of English. Actually, Zhizi's grandpa was probably the champ, as he had been in the US sometime during his younger days, and could say some polite phrases.

The first thing we were told was to change our socks into new socks that the mom had bought for us. I struggled for a bit to get my 39-40 sized big feet to fit into a pair of petite 37 sized socks, but nothing is impossible if you want it badly enough. Dressed in our new socks (a ritual for luck, apparently?) we went into the kitchen and asked if we could be to any help.

While me and Zhizi started off by helping Zhizi's mom to make dumplings, my bf was comfortably seated at the couch with Wang, Zhizi's dad, and the rest of the men of the house. The dad proudly offered him a selection of foreign beer, wine, local beer, wine and Chivas regal. He was also handed a cigarette. Since he sort of despises smoking, he declined the smoke but accepted a beer. Big mistake. Although the men had been excited to see him at first ("such a tall and handsome man!" -that much I could understand) he sort of sank in their eyes when he didn't want to share a smoke with them.

When he, a bit later, proceeded to behave weirdly by asking if he could help the women to make dumplings, he got the 'odd' mark written all over his forehead. While Zhizi's mom gushed with excitement of having a man helping her out, the men rolled their eyes, turned us their backs, and smoked another cigarette.

What felt like one million dumplings later, we were told to sit and wait at the couch while the rest of the food was being prepared. My boyfriend won back the men's respect by accepting another beer, and everyone was happy. The men continued to 'gan bei' (= bottom up) with my bf, meanwhile I watched the action with a cup of tea.

Once the food was ready and some other people had arrived we were seated at the table and dug into the food. The food, I have to say, was kind of amazing. First of all, I have never seen so much of it at the same time (there wasn't even enough space for everything, the the dishes were on top of each other), and secondly... there were so many odd dishes?! In 2007 we were celebrating the beginning of the 'year of the pig' so there were a lot of pig parts on the table, including: pig's feet, pig's ear, and u name it... Me, not being a pork lover at all, had some minor problems at first, but then decided to forget all about what it was and just eat, smile and be happy. It worked so-so.

In the middle of dinner a late couple suddenly arrived.

-They come from Australia! Wang informed us.
-Ohhhhh! we gushed, delighted by the fact that someone who could speak English was arriving. Now we could communicate better with our hosts.

Therefore, we were sort of disappointed when the 'Australia couple' (a cousin and his wife, if I remember things correctly) turned out not to be able to speak any English... at all. Well, or at least nothing beyond 'hello how are you?' and some other basic phrases.

-Did you just move to Australia, I asked the woman later.
-Oh no, we have lived there for 6 years! She answered.

Throughout the dinner the 'gan-bei-ing' continued, and the older people kept telling me and my bf what an honour it was for them to have a 'lao wai' in their house. We kept telling them how grateful we were to be there, and that's about how the conversation went on for the next 2 hours. We drank (or OK, the men drank, the women watched), we smiled, and we thanked each other, and then we ate some more. Although it may not sound like the most exciting dinner, it was kind of great.

At around 8pm we had finished eating and although we had initially decided to leave after dinner, this was met by big protests from our hosts.

-Stay for some midnight dumplings, that means good luck!!! they all urged.

And how could we turn down lucky dumplings (that I had been a part of making?)?

The following 4 hours were kind of slow. While the family continued to nibble for some hours, me, my bf, Wang and Zhizi were seated at the couch and watched a special CNY program full of colourful performances, dancing, singing and speaches. It was interesting for about 30 min... then it sort of all became the same to me, and the fact that I couldn't understand anything of what anyone was saying didn't make it any more interesting.

We were very attentivly looked after, constantly being offered tea, coffee, fruit, candy, Chivas, beer, and wine... But four hours of watching TV u don't understand is four looooong hours. At around 11.50pm we were called to the table and served midnight dumplings, in a hasty speed. Less than 10 minutes later the fireworks started outside the window and we were told to hurry outside. We thought this was going to be the night's big highlight; watching the fireworks with the family and wishing each other happy new year, so imagine our surprise when we entered the yard (with Wang and Zhizi) and were ushered into an waiting taxi.

We watched the fireworks from our taxi window during our ride home. It was kind of spectacular.
Posted by Jonna Wibelius at 7:50 AM

I guess you had to just get into a sort of "anything goes" mode and keep your sense of humor and flexibility. It sounds like you did both those things really well! I am sure I could never have succeeded with nearly so much grace.

It's funny that you have been blogging retrospectively as my last post is a bit of a trip down memory lane as well: