Planning a CNY escape -not my cup of tea 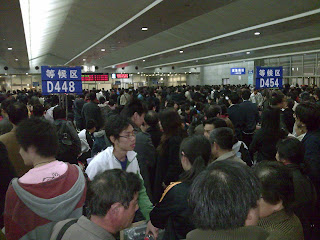 Although Christmas is approaching I am already thinking about the Chinese New Year, which will take place around Jan 26 next year, in case google isn’t lying.

My bf and I always have great plans for the national Chinese holidays; we plan trips to Australia, Thailand, Vietnam and Malaysia (travelling within China is out of the question during this time). In the end, however, it never happens. ‘Too expensive/ too late/ already fully booked’ are the most usual excuses, but there has also been other lame ones, like ‘well maybe it will actually be nice to stay in Shanghai during this year’s holiday?!’ FYI: staying in Shanghai (or travelling to Shanghai) during the CNY is an utterly big mistake. I love Shanghai, I really do, but during the Chinese national holidays, like CNY in Jan/Fab or the October National Holiday (during the first week of October every year), Shanghai turns into an over-crowded, crammed, impossible-to-get-a-taxi, and don’t-even-think-about-taking-a-walk-on-Nanjing-Lu’-city, which is actually not too pleasant to be in. As if the fact that there are people everywhere wasn’t enough, the constant fire crackers also tends to get to me at the fifth day straight of waking up to the sound of someone trying to blow up your backyard. No, I am not a fan of China during those national holidays.

Last year around the CNY time (actually almost a week before the holiday, but the frenzy starts early) I did a brave attempt to escape the city and visit Seoul. Unfortunately, my adventurous journey was timed with the biggest snowfall in Shanghai since, I don’t know when, and I don’t even want to guess (but a pretty long time ago, I am sure? 50 years or so maybe? Fill free to fill in the gaps), leaving me first stranded outside Suzhou train station, and then violently pushed into the actual station, by a man that I now officially refer to as ‘the man who saved me during that snowy day.’ Although it made a decent blog entry, the actual experience wasn’t that much fun that I would like to do it all over again.

This year, like the last two years, have been full with hope, excitement and planning. We started looking into travelling destinations already in August. The problem with me and my bf however, is that we are great at looking into things, but bad at actually booking something. As a result we are now, a mere 3 months prior to the CNY, trip-less and frustrated, and on each other’s backs, trying to get the other one to magically pull a rabbit out of a hat and find us a cheap, lovely escape to a destination that isn’t too crowded, or too expensive, during this peak holiday time.

Has any of you guys booked any nice, CNY escape? Feel free to share. Maybe if I feel jealous enough about your planned get-away I will be motivated to also book something too-expensive-but-totally-worth-it-because-it-actually-means-a-get-away-at-a-time-when-u-really-need-it. I could really do with some inspiration.
Posted by Jonna Wibelius at 5:00 AM

I guess I must be a glutton for punishment, as I am flying back to Hunan, from America, over CNY!

But the key is to fly through Seoul to your destination.

I guess the best way is to find some place that nobody is interested in.

I do not remember where I went last time, but, I am sure there must be at least some small towns that people will not visit or know.

Another alternative I have never tried in China before but should work in THEORY is, well, tramping(驴友,I learned this Chinese word only a week ago, it's pretty new）.

It sounds bit crazy in Shanghai, but many Chi people do that,here is a website I found on google, hope it helpful.
(http://www.traveler365.com/Index.shtml)

Emmm i tot the cities would be empty since ppl are flocking back to their hometown for the holiday season.

Do check out couchsurfing.com. Website filled with free couches to crash OR volunteer who offer city sightseeing for free

couchsurfing.com is awesome! May not be what you are looking for on this particular trip, but I just wanted to express my enthusiasm for it after MG brought it up.

Mark -I was sort of thinking to get out of China... but I guess a small town could also be an option.

MG/Sarah -yeah I have heard of couch surfing before, but for this holiday I was sort of more thinking about a beach then someone else's couch... :) It is a great option if nothing else comes up though.

I plan on probably just staying at home and relaxing for most of the CNY. Maybe go to see some of the tourist things I've been meaning to look at. Or if my roommate is doing anything, maybe she won't mind if I tag along.

Howdy, long-time reader, first time commenter. Here's a plan: fly to Xiamen, then take a ferry to Kinmen (a small island which belongs to Taiwan, 1 hour ferry from Xiamen). I visited today, and it was really pleasant - and empty! You would need to check the visa situation: many Western countries don't need a visa to enter Taiwan.

尼克 -I'm planning to visit Hunan next spring.. although for national holidays I'd like to avoid China.

Tripfriend -tourist stuff during the national holiday in Xi'an?!!! U might want to reconsider that!!! The city will be packed!

Matthew mayer- thanks for the tip, that sounds like a really good plan. I wonder how it will be during the CNY though (as empty -I doubt so...) How's the climate over there at the moment? Still pleasant?

I actually found a reasonably cheap trip to the Philippines today that I will continue looking into tomo.

Climate is still pretty nice: sunny, can walk around in a short-sleeved shirt.

I guess it would be busier at CNY, but note that mainland Chinese cannot easily visit, so it would only be Taiwanese (of whom there are far less :D)

I plan on taking a trip to Tokyo before heading for some skiing at Nozawa Onsen, before visiting different cities in Japan. Then take the boat to Korea to visit Pusan and Seoul. Hopefully be able to try some skiing in Korea aswell. I will also meet a lot of all classmates in different cities, which I think will be awesome!

The cities in China is really dead during new years, because everyone goes back to their hometown. But I guess cities like Shanghai and Beijing is an exception.

I have been in Vietnam a few weeks ago. If you need some tips just mail me. I know a tourguide in Ha Noi who speak English. In Vietnam they also celebrate Chinese new year too. And I do not know how crowded it will be in those days.

My wife and I are thinking about the Philippines. We have some friends here in Xinjiang who are teachers here and are from there and they've been trying to help us plan a good trip. Apparently if you fly into Manila and stay on the north island there are a ton of good beaches or relaxing cities to visit.

Where did you find this good deal? We were thinking of taking a short flight from Hong Kong, but maybe Shanghai would be just as cheap.

I traveled to Vietnam during CNY 2004 and while it's true that they also celebrate the new year at the same time, it's not nearly as crowded at china. It's still relatively cheap to travel within the country and easy too. Not to mention the fact that the weather should be nice and balmy during that time. I made the mistake of shanghai for CNY 07 and definitely regretted that. Get out of china if you can!

Emil -that sounds awesome! we also wanted to go to Japan but gosh... toooooooooooo expensive?!!!

anonymous/Heli82 - Vietnam is being looked into! :)

Josh -I called the travel agent yesterday to enquire about the package I'd found to Cebu, but all the flight seats had already been booked. Bummer. So I am back on square one.

could you guys tell me?