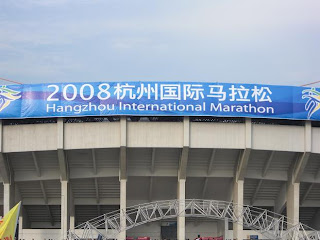 We came back quite late last night, hence why I never managed to get any post written. But Hangzhou, wow, where do I start -with the race or the city?! Well, let's start with the race... because it was a quite good one!

Since my bf had decided to run with me this time (the race was short enough for him to dare to try.. normally he's not big on running) I had no one to take photos.. so that's a bit of a shame, I don't have any photos from the race, at all.. :( But since there were photographers scattered all over the race course, maybe I can nick some shots from the Hangzhou marathon homepage later on.. let's see... :)

The most popular choice seemed to be the mini marathon as thousands of young Chinese girls and boys turned up to run it, wearing everything from: skirts, dresses, jeans, sneakers, high heels (...............!), handbags on their shoulders, cameras, and u name it... This fact resulted in the first 5km of the race (the full and half marathon started 10 min prior to the other races that then all started at once) being crowded and messy. The start was veeeeeeeeeeery slow! I tried to get away from the 'masses' but it was basically impossible, and seeing that there were so many large groups of young Chinese who were over the moon about running, and didn't give a d*** about running manners (I think about 1000 people stopped RIGHT IN FRONT OF ME ON THE COURSE to tie their shoe laces, to fix their badge, to take a photo, to take their girlfriends bag, etc etc etc) I eventually gave up too. Basically, it was a mess! 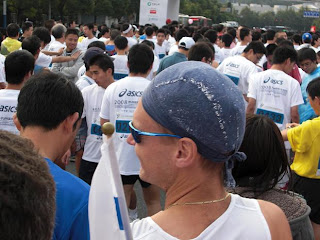 Once the mini race turned away it became a tiiiiiny bit better, but it was still crowded lanes and hard to break out and be able to speed. We were at this point by the beautiful West Lake and that was really nice! Much much MUCH nicer than the views you have when u run the half marathon in Shanghai... There were some spectators but no huge crowds, but it sort of wasn't needed, since u had the lake to look at. Really, it was much more beautiful than I had expected.

There were water stations at every 2,5 km (starting from 5km) with he first ones being too crowded and messy. Also, the people working at those station handed out ONE glass at time... hm... maybe try TWO glasses by using your BOTH hands next time?! Anyways, I nicked a whole bottle at 7,5 km that I then held onto for a bit. I hate having to stop while u r running just to get a glass of water. (Of course I had planned to take my own, geeky 'runner's water belt' with me, but in the end I forgot it at home.. something that always tends to happen for me. Oh well, next time). 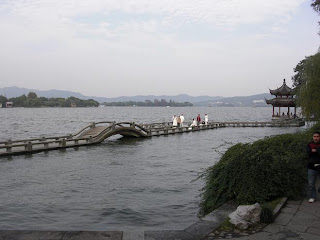 By 8km the half/full marathon runners turned and then the race course got really good! Gone were the huge crowds and finally I was able to pick up more speed (something I had started to do around 5km although not fully successfully managed). At around 9km my left foot started hurting.. it felt like my sole was burning... very weird pain, I don't know if anyone understands what I mean... but it felt as if I had been walking in really bad and hard shoes for too long and that I had a bruise underneath my foot?! Awful! But obviously I wasn't going to let a sore foot stop me, so I just ignored it and kept running.

Except for the burning pain in the foot the rest of my body felt great! No side stitch, no stomach cramp, legs felt strong and soft, and... well, I felt really strong actually! So strong, that I started to speed for a bit, just to see if I managed. The legs obliged without any problems. Cool. So I sped past a large crowd of fit-looking male laowais, who had started at the same time as me, and who didn't seem to like the thought that I girl ran past them. They soon caught up with me, and then we did the whole 'chase race thing' for about 1km before they gave up and let me speed alone with the Chinese. (I ended up beating them with more than 3 min in the end. Awesome! Not that I was competing or anything... or OK, of course I was!!!! I can't help it.. I am like a kid when it comes to competitions).

My boyfriend did not manage to keep up with me either (he asked later if I had fakes that foot pain, although I swear I didn't, it still hurts!!!) and I set off to get a good finish time. At the end, things got a bit crowded again, and at the finishing line-bit, u know, when u r racing against the clock and giving your all to cross the line... I got absolutely pissed off when people from the audience were STANDING on the course, taking photos, and some people were walking there. I yelled and pushed in order to run as fast as I could... and managed to cross the line at 1:10!!! I am quite happy with this time, seeing that the race was almost 14km and I am normally a 6min/km girl. This time is my best time, although I guess the race is too short to really count... but anyways, that won't stop me from smiling coz I beat my bf (who was really pissed because of that!) and the fit-looking-men and more importantly, I beat my own, slow pace by ending up doing a race with a pace that averages at 5min/km!!! This is definitely a pace I am going to start training to keep from now on. It would be great to be able to run a half marathon in that pace... (Since I didn't feel too tired after the race so I don't think it's an impossible thing to wish for. I just have to keep training). 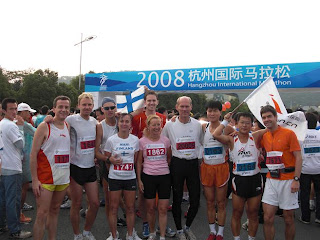 All the 'real' runners from our gruoup (choosing the short race excluded me from this fit looking bunch... *sigh* Oh well, next time!!)

So, except for the slow start and crowded finish line, I would say that the Hangzhou race was a pure pleasure. Legs felt great (my foot is still hurting though, I can't really walk on it now so I am walking on my toes). The weather was PERFECT! Chilly at first, but then the sun came out and made the whole day beautiful! The lake was gorgeous, and the race course, although a little bit hilly towards the end, was fine. Next year I will def sign up for the half marathon. I think I could have run a half marathon yesterday, seeing that my body felt so good... although before yesterday I really didn't feel as if I was in shape. Anyways, now I know. So no more 'wuss/wimp' races from now on! Promise!

Oh, another great thing about this race is that it has a fairly 'late' start... namely 8.30am. I know this is considered late for being in China, where most races start at 7.30am. In order to fuel for an early race like this I got up at 5am, ate a large sandwich and then went back to bed and slept until 7am... haha. I barely remembered eating that sandwich when I woke up again, it all felt like an odd dream, but it actually worked fine.. I didn't get any side stitch during the race.

Since we were a large group of runners that had come to Hangzhou together we all met up later for a nice lunch at the Wine Cellar, before we headed back to Suzhou. All in all I have to say it was a great race and a great day, and I would recommend this race to anyone who's interested in/enjoys a bit of running. 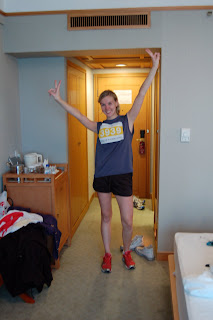 A sweaty and happy me, back at the hotel after the race. About the doing of the v-sign, I have no other explanation than a 'bad habit that I have taken on since coming to China'... (As well as being childishly happy for beating my bf in the race, I sps... He finished on 1:13 so not a bad time either)

Sounded like fun! Great that you've enjoyed the scenery and the race - I seriously could not even run that far, I wish they do a walking race :p

I really need a change and try to free up time and do something more interesting with my life...maybe go back to uni... *sigh*

Pingu -there are plenty of 10 km races too... u should try... running is addictive. First u hate it with passion, then u start liking it (normally doesn't happen until after 2 months or so) and then u won't be able to stop.

Although going back to uni sounds good too...

Anonymouse -hehe, thanks! My new, red look-at-me-asic-shoes... they can be a bit hard to match but are wonderful to run in! :)

Well done. I've got a half marathon myself this Saturday. Looking forward to it.(not really)

I'm hoping to visit my son in Suzhou next March and would like to take part in a race. How do I find out when they are on? I run most road race distances. I hope some one out there can help
Thanks

lygcgsun -good luck with your race!!! I wish I would have run the h-m too... it'll have to be next time!

Anonymouse -I don't know of any races in Suzhou... If u find out let me know!