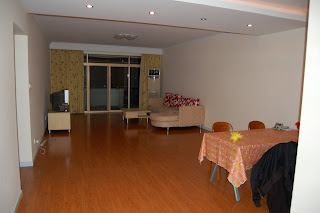 Clean all this myself? No thanks...

One thing I came to appreciate when I was home is our ayi. Even though housekeeping services has become more popular lately in Sweden (mainly because it is a tax-deductible expense for Swedish households since a few years back), most people still do their housework themselves. One day, I was having coffee with a friend of mine who had obviously had enough of washing her boyfriend's dirty underwear. In fact, she was so sick of doing most of the house cores, that she was considering leaving him.

-How do you get your boyfriend to do the dishes?! She asked, in between explaining how much she loathed to clean the toilet and doing the laundry. I have tried and tried but it is as if he doesn't hear me?!

-You have a cleaning lady?! There was an accusing tone in her voice.

-Yeah, ehum, sort of. Although she doesn't do much, I lied. Or, well. She does. But, it's like... we still clean at times ourselves too! (Another lie. I have to stop).

My friend looked something between jealous and disgusted.

-Well, you should bring that ayi of yours with you whenever you decide move home. She might be able to save a marriage or two over here.

And actually... I am quite sure she would. Just the thought of fighting over whose turn it is to do the dishes makes me tired. Gosh, we are spoiled over here.
Posted by Jonna Wibelius at 11:40 AM

You will probably need another Ayi when you have a baby. Can be very helpful.

Interesting. My dictionaries indicate 阿姨 A1Yi2 is a live in relative like an Aunt or around the clock care like a nurse. None of the definitions said maid till I checked online. At first I thought you were using a Swedish term.

Well yes, dictionaries don't translate 'ayi' as a cleaning lady but as an aunt. In the old days, children used to call any older lady 'ayi', and I believe in some cities this is still the case (just like I was called 'gu niang' when I was in Dalian). But in today's modern China the woman that comes and cleans/cooks for you is also called an ayi. I suppose it has to do with the fact that it used to be the 'aunt' who did it, and then if it wasn't an aunt, the lady would still be called ayi.