For the love of Starbucks 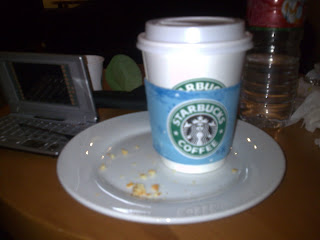 Suzhou has a fairly new, fancy center called the Suzhou Science & Cultural Arts Centre (SSCAC) 苏州科技文化艺术中心. From far, it looks a bit like the bird's nest, and from inside, it's kind of nice too, although a bit empty in terms of visitors. Even though it has a cinema, a theater, a dinner theater, restaurants, and an IMAX theater (and some art center I believe although I haven't seen this myself) Suzhou residents haven't yet found their way to the area where the center is located.

Yeah, because that's the thing. The SSCAC is located in the upcoming area of SIP (Suzhou Industrial Park) and is still to be surrounded by offices and living complexes. Right now, it is sort of a lonely center with the views of Suzhou's Jinji Hu lake. There are loads and loads of building projects taking place in this area, however, so I don't think we have to wait many years before the area becomes more buzzling. But at the moment, it's kind of quiet and ghost-town-like.

A friend of mine was curious about the SSCAC and payed it a visit some months ago. She was surprised when she found a Starbucks within the area of the center, and decided to kill some time over a frappucino. The Starbucks was one of the bigger ones, with a great lake view and loads of free seats. In fact, all seats except for the one she occupied were free! There weren't any visitors, despite the fact that it was lunch time.

A bored Starbuck's worker took her order and offered her a cake from the fully stocked (and untouched) cake selection. Once she sat down with her treat it didn't take long before he came over to chat with her, excusing himself for behaving like a stalker, but explaining that he was so bored working alone at the Starbucks every day and that they never had any visitors.

-So why are you working here then? My friend asked.
-I have to. He replied. I am the manager.
-But this area is so empty, my friend went on. Why did you even open here at this time?
-Actually... Rumours have it that Starbucks didn't want to open here just because of the reason you just mentioned. It is an empty area with no business at the moment. But when they had finished building the SSCAC the local Government wanted a Starbucks next to the center. So they told Starbucks. And when Starbucks declined the offer, the Government pointed out that if this area wasn't good enough, then maybe Starbucks could pack up their business and leave China. And so we opened.

My friend told me this the next day and I listened, mouth open. True or not? Who knows? Maybe this manager was so bored that he has started to make up stories? Or maybe he is telling the truth? I haven't personally visited this Starbucks yet, but I will once I come back to China after X-mas. Not only do I want to check out the great lake view and be able to select a cake from a fully stocked fridge (!), but I also want to have a chat with this 'bored' manager to see how much truth there is in his statement. 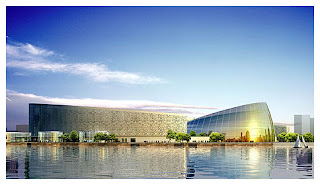 Picture: Suzhou.gov.cn
Posted by Jonna Wibelius at 7:37 AM

mabey 'frappucino' should be
'frappuccino'?

Man, 2 spelling complaints wihtin one week?! I am going to start using spellcheck from now on so that u guys don't have to act English teachers...

Thank lord I am not writing in Chinese. Then nothing would be right!

within... hahah. this is getting better and better

Can't be true. The amount of business that Starbucks brings the country, they are highly unlikely to pull out because they refuse to open in a dead area of Suzhou.

More likely, they have been given a very favourable rate to open there or they are expecting it to be very busy in a few years- and are getting in before the competition.

haha, love that story - you'll have to go and check out how true it is.
& I can't stand when people correct my spelling on my blog. Obviously they were just typos. I don't think anyone read wihtin and didn't know that you meant within. sheesh.