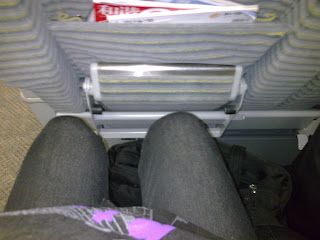 Yesterday morning I was taking the early train to Shanghai. As usual when I got on the train, there was already someone sitting at my seat, who I had to ask to leave, a process that resulted in curious/amused looks from onlookers. When I sat down (in between two Chinese business men) I noticed that the man to my right hadn't stopped looking at me and that he kind of looked keen to chat, so I decided to be nice and returned his glance.

The beginning went as usual. He introduced himself in Chinese, wondered how long I had studied for and complimented my Chinese skills... Then, he pointed at the papers in front of him and switched to English:

-I have a job interview with an American company! Can you help me prepare?

Although I had planned to sit back with my iPod for a 30 min power nap I simply couldn't turn down the offer from this man. He was so polite and seemed so nervous.

-Sure, I said. I can be the boss asking you questions.

We started in English, but I realised soon that his level of English wasn't that good so we switched to Chinese (he wasn't sure in what language the interview was to be conducted in, but we were both hoping for Chinese). Once we had worked out his answers in Chinese I started helping him translating them to English.

-Look, I already have, he said and pointed to the papers in front of him.

And there it was.. answer after answer, neatly written in quite good English. I must have looked like a question mark because he quickly said:

-It is easier to read and write in English than to talk.

Going through his answers I noticed some very interesting things, such as his answer to:"How do you respond to criticism?"

"For me, silence is golden. I don't say anything if someone complains. I don't have a problem with constructive criticism though."

-Eh... I said. Is this true? Wouldn't you even ask WHY someone is criticizing you? So that you can improve for next time?

-No. It is better to stay silent.

Moving on, we came to a part where he had been asked to "describe yourself."

* Hard-work (which I changed to hard-working).
* Diligent (Just a question to all you native English speakers reading this... do u often use this word? The Chinese seem to love it, as it is the number one translation of the very good Chinese word: 聪明 -cong ming. During my 4 years in England and Australia, however, I haven't heard it once....)
and then............:
* Sex appeal.

Wow. I am so happy I got a chance to help this man out... I really wonder how he went though. His spoken English was quite poor...which is understandable. At the moment he was working at a Chinese company and had no contact with foreigners at all. I would have offered a language exchange if it wasn't for the fact that I already have two language partners who I barely have time to see every week... Anyways, I am glad I could help out a little bit... and prevent that 'sex appeal' to be said out loud!

Once we arrived in Shanghai we said goodbye and I rushed to the metro. When I was standing there waiting for a not-so-packed-with-people-car (wishful thinking!) I suddenly heard a male voice say:

I turned around and there was Nike! As in 'When I met Nike' that time in Kunshan?! Ha! Small world! Since our train station meeting at that time we have only caught up a couple of times for dinner. Anyways, now he was taking the metro to People's Square to change to line 2 and head to Pudong, just like me. Awesome!

How funny that even though these places (Shanghai, Suzhou...) are million-cities, u still manage to bump into people that u know every now and then.
Posted by Jonna Wibelius at 7:22 AM

As always an intersting blog entry. When you say someone was sitting at your seat, I do not understand, are you referring to the seat which you normally sit in?

...unless he is interviewing to be a male model...

Geoff -maybe not very clear to someone who hasn't taken a train in China... OK, I'll try to clearify: on your train ticket u have an assigned seat, (a number) and that seat is often already occupied when u get on the train by someone who might have bought a stranding ticket and therefore doesn't have his/her own seat. Then they just sit down somewhere and hope that that very seat will remain free...

Pingu -he was interviewing for a sales position.. although maybe that also requiers some sex appeal?! ;)

Jonna - Great story. I've conducted many interviews in my time in China so many of his stock answers have a ring of familiarity. It's really funny - they say what they think you want to hear and it has NOTHING to do with the real answer:

Candidate : My weakness is that I work too hard.

WoAi : Hmmm ... I see, you maybe should try addressing that weakness quickly!

I think it's awfully nice of you to engage with strangers. I'm terrible. I would pretend not to have noticed he seemed keen to chat and quickly turned on my iPod. God I'm evil.

I usually don't mention my sex appeal. It should be glaringly obvious when they meet me, LOL!

Diligent seems to be a word that only gets used in specific situations. A job interview is, however, a prefect example. It's become a word that gets thrown around when you're trying to describe a person you barely know and don't want to say anything negative about them.

Just reread the Nike post. What IS your opinion of public buses now?

Sales definitely needs sex appeal!
Imagine the stuff I could sell if my clients just stare at my boobs...oh wait...

Woai -hahahhaa... I can imagine some answers you get during interviews can be quite interesting!! U should blog about it.

As for talking to strangers, I know, I am too nice. But this particular man was so.. I don't know. Well, he reminded me of me the day before my 7th bday (anxiously thinking about if I am going to get that My little pony stable or not), filled with excitement and anticipation.

In general, it is close to impossible for me to go on a train, pick up a Chinese book/newspaper and start reading. As soon as someone spots me reading something in hanzi they wanna ask me if I understand or not... almost like they wanna test me if I am just fake-reading or if I am really reading... ?! Anyways, I actually don't mind it that much. In Sweden no one ever talks to u (unless u know each other), so I still find chatting to strangers kind of refreshing.

Tripfriend -I still loathe taking a bus in Suzhou for some reason, but in Dalian I really enjoyed it and used buses more than taxis. I don't know why.. they were just cleaner, nicer.. and not so mega-super-duper-packed-with-people?!

Right, next time I see you in Lounge 18 I'm gonna say hello, so you'd better not reach in to your bag for your iPod headphones!

Actually, I did blog about it:

woai -u kidding me?! I would NEVER reach for my iPod if I met u. If you're just half as hilarious in real life as u are in your blog, chances are I'll be laughing myself to tears (in a good way).

Jonna - In real life, compared to my blog, I'm probably slightly less funny, equally diligent but have much more sex appeal, so you win some, lose some :-p

hahaha nice! i use the word diligent fairly often, esp. when i'm applying for internships etc. it's a pretty good word to use i think! better than 'sex appeal'!

Great post! How good-natured of you to help that guy prepare!

Is "diligent" really the most common translation for 聪明? I'd have thought it was "intelligent."

I interview people all the time (I'm an admissions representative for my old high school) and it does seem to be a word that comes up a lot in that context. (Mercifully never had to deal with "sex appeal!" But now at least I'll be prepared if it every does come up.)

You know, I have actually stopped carrying Chinese books around in public places, because having people ask me "Can you understand that?" always ticks me off so much. I always want to say, "No, I can't, because the Chinese language is way too hard for a simple barbarian like myself! I'm just looking at the words on the page in order to fool people."

Last time I was in China (11 years ago), we called this the "'Monkey Can Talk' syndrome." A highly regarded scholar of Chinese literature once told me that when he came to China an absolutely staggering number of people (outside academia, I hope), on hearing that he was a specialist in Chinese literature, asked him if he had ever heard of Li Bai. I mean, come on. This guy WROTE THE BOOK on High Tang poetry. It makes me crazy! If I ever get the chance to meet Professor Peng Xiaoyu at the Center for Hellenic Studies at PKU, you won't catch me asking him if he happens to have heard of a guy called Homer. In fact, since I have only an undergraduate degree in Classics where as Peng Xiaoyu is a PROFESSOR of Classics, I'm going to assume that he actually knows rather more about it than I do.

Sorry, what a rant! I can't seem to leave this subject alone.

This one is way funny. Yeap. It sounds like China. BTW, he probably asked a Chinese friend who has a good command of English to write the answers for him. I have done lots of interviews with IT professionals over the years in America. I have Chinese candidates are at least honest and you can pretty much tell if they know their stuff. Many software engineers from India would ask a friend to do phone interviews. We got burned big time with our complaints from our clients on Indian software engineers, but not once with Chinese software engineers. That Chinese man you met sounded nice albeit funny. Glad you could help him.

Thanks Jonna for the answers.

I learned that "cong ming" translates as "clever" and I hear the former used in China way more than I hear the latter used in the US. "Diligent" isn't exactly an every day word, but maybe an every week or every month word.

Oh, and I had a similar experience, only the guy actually asked me to write his resume for him! Of course I refused, despite his many pleas.

Hahaha... this is a funny story.
I should admit that myself am using the word "diligent" quite often and never realized that it is rarely used by native speakers.

It's a pity ou didn't ask his telephone number to find out later the result of interview ;-)