You win some, u lose some 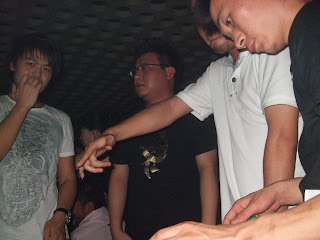 Some months ago I shared my excitement in this blog over the fact that Suzhou's now had its own high-quality expat magazine: That's Suzhou.

The story got even better when I bumped into their sales director who turned out to be someone I have worked with in media before, and he suggested that him, I and the editor of 'That's' would head out for lunch some day and talk about possible freelance possibilities.

"Awesome" I thought, until a little birdy told me that the magazine has been pulled back due to the credit crunch. Boooooh!!!!

Not only does this mean no freelancing but it also means that Suzhou doesn't have any good expat magazine anymore... shame shame shame.

What Suzhou has, on the other hand, is a new nightclub. Just the other week at uni, one of my Japanese former classmates came running towards me.

-Jonna, Jonna, do you know that Mouse nightclub will open in Suzhou?

-Mouse nightclub?! I repeated. How could it sound so familiar but still not?

-Yeah isn't it cool, they have the same club in Shanghai, it's apparently really good! She continued.

-Hang on a minute...I said. Do you mean MUSE nightclub!?

So no That's but a new Muse. I wonder if Suzhou's Muse will drag the same kind of party crew as Shanghai's Muse does... Although I strongly doubt it I guess I will have to check out for myself some day in the future. Speaking from my previous experiences of nighclubbing in Suzhou, however, my expectations will be low!
Posted by Jonna Wibelius at 6:00 AM