Look after yourself -in public places 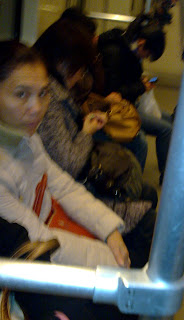 Look what I snapped in Shanghai's metro the other day: a woman clipping here nails (mind the blurry picture -mobile shot).

Now, it isn't so much the fact that nails are flying around in the metro, hitting other people as well as the floor, that disgusts me (although that part is sort of creepy too). But I am more or less amazed of the fact that so many people take their nail-clipping to a public place over here? It amazes, yet confuses me, that they carry around their own nail clipper every day, and then at the most crowded place of the day, like the Shanghai metro, they decide to take it out and give their nails a good trim. Why, oh dear god, WHY?! Why not do it in the bathroom, or outside, or when you are alone, or at least when you are WAITING for the metro?

I have watched both men and women clipping their nails in the metro and I have to say that this is something that I find less acceptable than the constant spitting that is taking place everywhere here, including public pools. From judging at what I saw yesterday, it didn't seem to bother anyone else but me in the metro. I guess people are used to it.

Even though I have seen it for the last 2,5 years, I don't think I ever will adapt to this particular habit... and if a stranger's clipped nail would suddenly hit me in the metro, I think I would get kind of aggressive.
Posted by Jonna Wibelius at 6:21 AM

That was one of my pet hates actually and didn't think anyone else noticed.
I actually find it hard to bear cutting my own nails, so seeing someone else do it in public is 10x worse than spitting for me!

I came across your blog and was impressed by the large number of entries you have written. China related blogs are not doing well lately. The renowned Peking Duck Blog recently came to an end. I hope yours will last for a long time.

Little tiger -hahahah I am exactly the same. My mom had to cut my nails for me until I was 13.. still don't like it.

Harry -no risk for this blog coming to an end as long as I live in China :)

Haven't experienced this one yet thankfully! It does seem more disgusting than spitting, but why? Honestly which would you rather accidently put your hand or foot on, a nail clipping or a pool of spittle?

I find it quite annoying when my colleagues here (who are not asians) would clip his nails next to me at work. I can only imagine how you feel seeing others do it public. I think it's up there with picking your nose...it should be privately at least at home.