Getting back on track (part of the new year approaching) 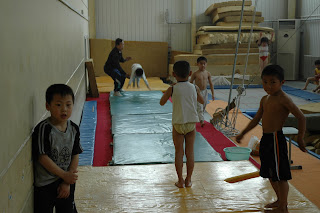 Train as hard as these kids next year? Naaaah...

I've been feeling a bit drained lately... nothing unique I believe, it feels like everybody are more or less struggling at this time of the year. For me, it is a combination of constantly feeling tired and hungry, feeling stressed although I don't have that much to stress about, and, finally, feeling a huge lack of motivation when it comes to going to the gym and working out. Once I am there it's fine. But the getting there?! Gosh. Don't even get me started. Packing a bag feels like lifting 100 kg in the bench press. Riding the bike there is like running a marathon while you have the wind against you... yeah well, I am sure u get what I mean. I don't think I am the only one feeling like this at this time of the year, especially since I have noticed that the gym has gotten a bit emptier lately (or, has it always been -maybe this is just an excuse I am making up for myself so that I don't have to feel so guilty about not going so often anymore?) and I have definitely spotted more tired looking efforts than usual. It has to be the season. Or, something in Suzhou's not-so-clean-air.

With the new year approaching people all around me are talking about new year's resolutions, giving themselves empty promises that we all know ain't going to happen ('running a marathon' is on of the most usual ones. I know because I have said it to myself plenty of times). I gave up NY resolutions somewhere around the age of 17. It was that year when I had promised friends and family that new year was going to be a healthy year for me. No more candy, cakes or ice cream. Then, on Jan 1st, I entered the kitchen feeling tired, hangover and ravenously hungry, just to find the leftovers from mom's and dad's NY party in the fridge. "Awesome" I thought and grabbed the best thing I saw, (the chocolate mud cake), took out a tub of ice cream from the freezer and dug in. Ten minutes (and too much cake) later, my little brother joined me in the kitchen, and looked at me pigging out.

-Weren't you going to give up cakes? He said.
-Shit, I forgot. I said. I sort of had. Or, I sort of had made myself at the sight of the cake.
-Well you can always start your resolution next year. Or tomorrow, he said. Or, you can keep the resolution u made, and just make an exception for chocolate cakes.... and ice cream! He quickly added, looking at the giant tub that I had half-emptied.
-Yeah, good point, I said. Maybe I'll do that. Although both him and I knew that it would never happen.

After that I stopped giving myself empty promises and started with goals instead.

And then, since I moved to China:

As you can tell... I have a bit of a problem both when it comes to resolutions and goals. Maybe I am doing it the wrong way. If anyone has a tip when it comes to fulfilling your dreams/goals/resolutions... feel free to share. At this tired time of the year, I could need some serious kicks in the a** to get me going again.
So far, I actually haven't made any big goals, plans or resolutions for next year. But I would sort of like to change both my training (into something more fun and something less 'have-to' -a friend of mine suggested I would try the 'Body for Life' program, but after googling the book I feel more scared than ever at the thought of following a program like that, besides, I could never follow a diet. It's not my thing), AND my Chinese. Although guess what?! I have already decided next year to take the HSK course!! Not bad huh? Well, always it's a start anyways.
What about u guys, is anyone thinking about NY resolutions? Do Chinese people give NY resolutions? I assume they don't. Seeing that some of my Chinese friends have adopted the Xmas culture and give each other presents during the month of December, I can imagine that some Chinese also will celebrate the western NY like we do in the west.
Posted by Jonna Wibelius at 7:07 AM

in hong kong, we also do the new year's eve countdown, and we have a day off (public holiday) on new year's day as well.

but i guess most of the people don't see NY as the "real" begining of a new year (it's more like having an extra day off to drink/sleep yourself senseless) the real deal(i.e. CNY) usually comes about a month or so later.

maybe i should just speak for myself. i was (still sort of am) a TRUE believer in NY resolutions. it's like having a a goal (or dream) in life that u would be a much better person or have a much fulfilling life when the clock strikes 12 on new year's eve

in practice, though, i'm just too much of a procrasinator to keep any promise i made...how nice...

that's why i luv the idea of having two NY, the western one and the chinese one. i usually start making plans before NY. if i screw up fast, i can always tell myself "oh the REAL new year hasn't started yet! i still got a month!" so that gives me a month-buffer and hopefully i could really start my resolutions after CNY...what if it got screwed up again? well...then i guess we just have to wait for next year :P (procrastination at its best)

sorry for the long post...all i wanna say is, while making plans for the future, don't forget what you've already achieved in the year passed, which i believe should be quite a lot...

i mean, anyone who can keep up such an interesting blog should be pretty darn proud of herself :D

TFHK -thanks a lot for those words.. made me quite happy on a day like this (when everything, for some unknown reason, is kind off... bad. Like I said in the post. For some reason I feel a bit off a.t.m). I think u and I are quite similar if u normally screw up fast.. I mean, just thinknig of me sitting there eating chocolate cake less than 12 hours after making a resolution about not touching sweets kind of shows a weakness... oh well. I also love the idea of goals. I just wish I could try to achieve one for once!