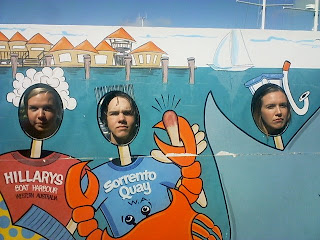 So what have I been up to for the last 8 years... well, a little bit of this and that I suppose. Some things more useful than others...

We had a class reunion last night and I saw friends I haven't seen since we threw our high school graduation hats in the air back in 2001... I was expecting to hear tales of world travels, volunteer working and giving birth to babies, so I was a bit surprised when I realised that I the night's main attraction. Everybody wanted to hear about China and I was actually surprised how little people knew.... Funny to realize that China is still this far-away, exotic place to most people over here. (Someone even asked if I go to the beach often?! Hahaha... 'Isn't Shanghai a coastal city?' Ehhhh....) Also funny to hear what people think u have been doing over there (u know how the talk goes.... somebody hears you are in China from someone else and since nobody really knows what u r doing, a lot of things are sort of... 'made up') These were some of the more different questions I was asked throughout the night:
-Jonna! I heard that u have been travelling through Asia for the last 10 years!! (dude, we graduated in 2001?! Where did the last 10 years come from?! Although I like the Asia part! :))
-Jonna, is it true that u have lived in Russia for some time?!
-No. But I've lived in Finland for one year.
-Wow. So it is true!
-Finland! Not Russia?!
-What's the difference.
-Hm... good point.
-Jonna, is it true that u can speak Chinese fluently? My dad's company is doing business in China and they are looking for a translator. Interested?
-Ehum. I wouldn't really call myself fluent...
Geez. Where do people get everything from? Anyways, it's so much fun to see people u haven't seen for ages and hear what everybody are up to nowadays. Seems that most people have stayed in Sweden although some have studied abroad. The next date for a reunion has already been set: Next December in my flat in China. As it turned out, everybody are really keen to visit.
Posted by Jonna Wibelius at 6:49 PM

Wow, that must have been such an odd experience. However, all this time in China must at least have taught you how to weather being the center of attention!