How to: make people leave at closing hour 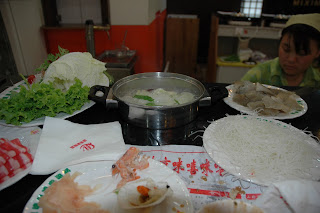 Last week we decided to take our visitors to a Hot Pot restaurant. It was a freezing night and our timing couldn't have been worse: we arrived around 7.30pm, namely PRIME DINNER TIME for Chinese people, and the restaurant was packed. There was a waiting line that seemed kind of long, but still went incredibly fast? I don't know if it was for the fact that we were four blonds (me, my bf + our 2 blond visitors) or just because we were four people and most of the other people that were only 2 and waited for a small tables. Anyhoo. Once we were seated we started ordering... loads and loads of stuff... Every time I asked the waiter if he thought we had enough for 4 people he just shook his head and said 'oh no no no.. more, more, more'. (He must have thoughts that we were ate twice as much as usual customers because when all the food arrived later it was way too much -surprise surprise!)

It turned out to be a nice dinner for all of us, even though our guests (who at that time had just arrived to China) were struggling with their chopsticks, until we about 1 hour after ordering, suddenly all felt a chill fill the restaurant, and noticed that a lot of people around us started to leave.

-Oh, someone must have accidentally left the door open... me and my bf explained to our visitors.

Turns out, it wasn't that 'accidently' after all. Ten minutes later the place was half empty, and we were eating with our jackets on when a waiter came up to us:

-Excuse me! It is time to pay! She said and handed my bf the bill.

-Eh... yes! the waiter said, with the usual, nervous laughter.

It was way too cold to stay anyways, so we paid up and left. Still, I cannot stop thinking that they have a funny way to do things over here. Why can't they just tell u when u order that 'we are closing in one hours just so u know' or at least come and take your last order 30 min prior to opening the doors and as a sign for people that it is time to leave. (not that we needed to order any more food, but u know what I mean).

This brings back memories from when I used to work at a pub in London when I was 19... Pubs in England have to close at 11pm (the best rule ever for people working there!) and it was always a hassle to actually get people out of the place. Now I think to myself, 'how stupid we were! We should have just opened the doors and let the cold air fill up the pub. That would have triggered everyone to leave.'

Well, you learn something new every day!
Posted by Jonna Wibelius at 7:27 AM

in the summer time, the waiters may start to sweep the floor to make the guests feel the dusts is coming into their dishes...

You know, most pubs don't close at 11 anymore. Britain has 24 hour drinking, so it is up to the manager when to finish.

And 9pm is late for most Chinese people eating. Most will try and get to the restaurant at between 6 and 6.30pm.

hmmm... what do they do in summer, close the door and open the fridge?

I've read the link attached to your mail, it was very helpful. Thanks for taking the time to reply me, really appreciated it.

Oh and I can't wait to eat hotpot when i arrived at shanghai. *drool*

anonymouse1 -they don't? Thank lord I left working in hospitality behind me.

zhou/anonymouse2 -or, they turn off the air con and everyone starts feeling warm, queasy and uncomfortable... :)

It must be a small independent place. The little lamb hotpot place near me opens REALLY late and is often packed at midnight. In Beijing they had lots of 24 hour hotpot places.

But yeah I hate those tactics to get you to leave, but I usually avoid going anywhere close to closing for that very reason.

And yes, England has finally got rid of those old drinking laws so now you can see people passed out in the street at any time of the day, not just 11pm!

24 hour hot pot places in Beijing? The only 24 hour anyhting I have been able to find is McDonalds!