4 days on Hainan Island -what to do 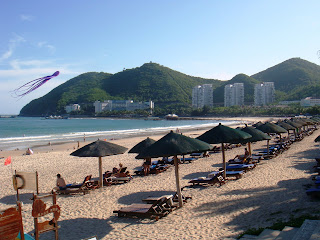 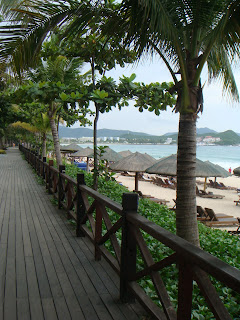 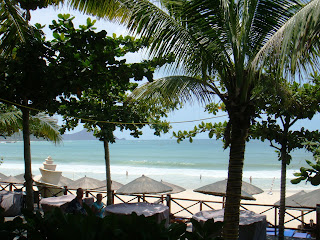 One might wonder… except for swimming and sweating in the sun, what else is there to do at Hainan island?

Well, actually… not that much.

It was way too warm to do any kind of shopping during daytime. Also, like I said in my previous blog post, clothes were too expensive anyways. 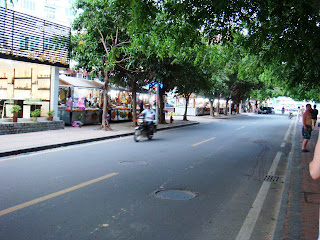 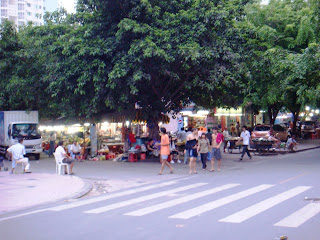 Dadong Bay’s beach strip was well equipped with restaurants and bars. We tried some of the restaurants but weren’t overly impressed (like always: nice location but so-so food). Since Willing is a non-drinker we swapped the beers/cocktails for ice cream/fruit/sorbet every night. Suited me quite fine. I’m not that big on booze anyways. 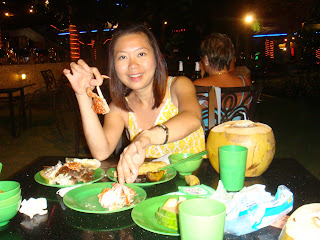 We all know the importance of eating in China... 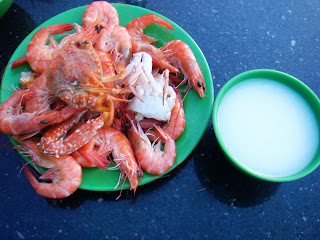 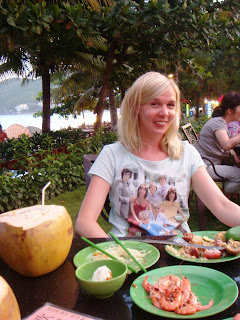 Enough food on the table?

What I did enjoy however, was morning beach power walks and pool swims. Poor Willing was dragged up at 7am every morning, forced down to the beach where we walked, ran (just a little bit, too hot actually) and then went for a swim. Or actually, now I am lying. I didn’t get her down to the beach every morning, because after our first ‘session’ she was so sore that she almost couldn’t get out of bed, and threw a towel at me when I tried to get her to come with me the next morning. 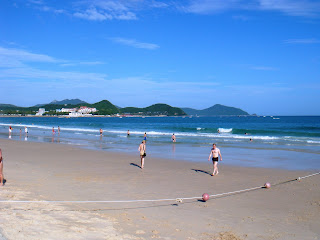 How can you resist a power walk when you see this? (well apparently because you are tired and because you hate power walking... I learned)

Swimming went a bit better though. And man, it was nice to swim again! No one spitting in the pool, no one zigzag swimming in front of you. No children playing exactly where you want to swim… And the tired, but fresh, feeling afterwards? Ahhh…. Wonderful! I might have to take up swimming this summer in Scandinavia. 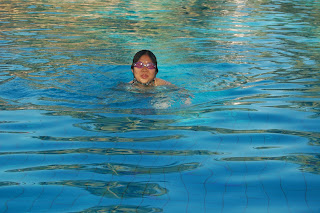 When we weren’t eating, swimming, power walking, sun bathing or sleeping, we went to a spa where I had The Best Foot Massage Ever. And why? Well because they used cupping! On the feet! I’ve never tried this before and I would be dishonest if I said it was a pleasant experience, because it kind of hurt, but again… I felt really fresh afterwards, and it was kind of fun to try. 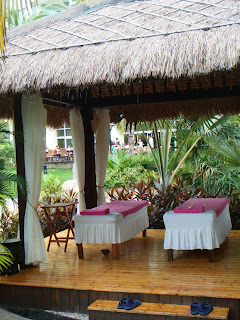 Possible to have a massage outside as well as inside 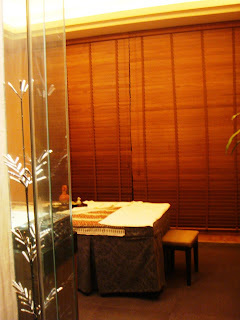 There were also some famous hot springs that we were recommended to visit, but decided to skip. The thought of sitting in a hot spring when it’s 35 degrees and humid made me nauseous. Although apparently it’s quite an experience because in the water swims a bunch of small, hungry fishes that apparently enjoy eating people’s dead skin. So while you’re sitting there in the water, they are performing some sort of live peeling (read: nibbling on your body) on your skin, that (according to one local) “feels just like massage.” Some of my friends have tried this (we call it ‘fish peeling since I don’t know the official name) and they have liked it. Now I feel a bit bummed that I didn’t try, but oh well.. maybe next time!

What we did try, however, was the tourist bus to Sanya Bay (cheap and OK) and then a beach ride with what I guess can be called some sort of bike tuk tuk version. For 2 yuan he drove us along the beach where we ooohed and aaaaahed to everything. It was fun until we got off and he tried to convince us to go to some pearl market. We obviously refused. 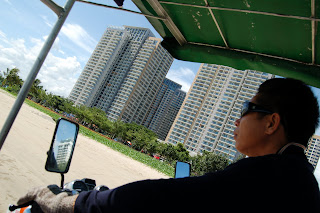 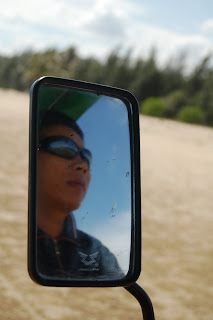 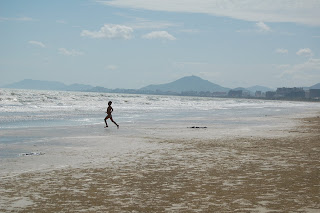 You can also go on Banana Boat rides, try water skiing etc, but it was quite pricey so we skipped it. Also, I once tried water skiing in Indonesia and I couldn’t walk for 2 days afterwards. Much harder than what it looks like!

Other things to do on this island: 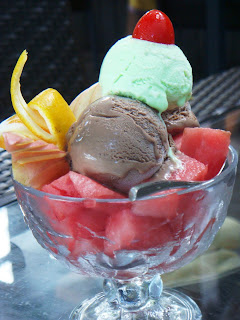 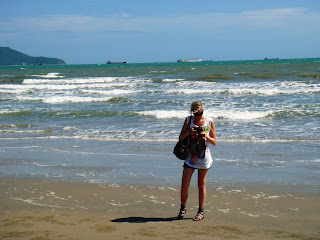 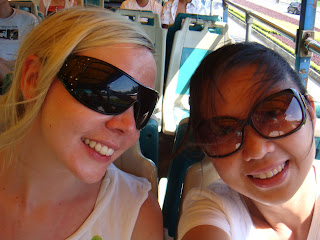 Go for a windy ride with the tourist bus

Posted by Jonna Wibelius at 8:58 AM

Looks like a fun trip!The pictures are great!What a beautiful place!

Boy , what a wonderful time your having with you Friend .
Here I am and waiting for my Wife to get a Visa , to come to America . Happy for you , but I could cry . Well almost . Love your Post's as alway's , great Job . Thank you , Jonna .

Ahhh Hainan. I have been living in New Zealand for nearly 10 years, since I was 8, and lived in Beijing before then.

The time I went to Hainan was when I was 6 or 7 and had a 40 degrees favour. I had been sick for a while before then and i'd like to think the fresh change of the holiday made me better.

I believe that was the first time I saw sea. Haha. Here in NZ the beach is just around the corner so not a big deal now.

Really a nice blog and trip review. what a wonderful trip you have.

It was nice that you ended the pictures with a shot of you twins.........lol (I think I would've passed on the fish eatting tank.....sounds creepy!

Great to read you had a great time there. I was really impressed with the spa you took photos of. They looked much more upmarket and classy than I expected.

Do all the places you go to for massage in China do tui na and foot reflexology, or are there other styles too?

Wow, what an amazing description! I can't wait to travel some more in Asia, hopefully this fall.

I hope you won't take this the wrong way, but "peel" (like 'peel an orange') is p-e-e-l. If it's spelled "peal" that's the word for the sound a bell makes: 'the church bells peal every Sunday morning.' It can also be used for other loud, repeating sounds: 'He erupted in peals of laughter'

I've studied a lot of languages, and I always appreciate corrections myself. Your command of English is really impressive, and I'm so glad you write in English so I can vicariously enjoy your adventures in China :)

I wan't to go!!! You and Willing look like proper Russians =P

Hey thanks everybody for the nice comments! Everybody who wants to go....: go!!! It's actually not that expensive, especially not if u go off-season like we did.

Tamara -thanks for pointing out my mistake and nooooooo, I don't mind that! How can I ever get better if I cannot handle some mild criticism? It's cool. I've had many proof readers since I've started blogging! :)

Hahaha okay I'll reluctantly take it back :) . Seriously though, the Russians are lovely altogether. In Harbin, most of the foreigners were Russian.
So much so that the first thing taxi drivers used to say was 'You're from Russia I suppose?'. After the millionth time of having the same conversation after explaining that I wasn't and telling them where I actually came from I quickly got really bored.
So I found that coyly replying ' eh...yes I am from Russia' was the perfect conversation killer....still dunno why?? My older bro has lived in Russia for donkeys years and says the stereotype of them being unfriendly is completely untrue!

Sounds like a great trip - thanks for taking us along via your blog!