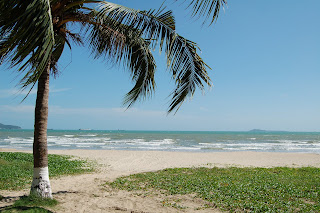 Back in a rainy Suzhou after 4 amazing days in a beach paradise. Hainan surprised me in a lot of ways… first of all, it didn’t really feel like China, but more like a mini Thailand with a lot of Russians and Chinese tourists instead of Europeans. It was extremely touristy, and, I wouldn’t describe the Hainan locals (at the places where we were) as very friendly, but I believe that’s often the case with places that rely on tourism. Also, why didn’t anyone tell me about ‘Hainan-hua’?! There I came, thinking I would be in a perfect environment to practice my Mandarin, only to realize how different the local dialect was compared to Mandarin. It took me almost 2 days before I felt comfortable talking to people. The local dialect was so… different to listen to, and at first, a lot of things didn’t make any sense, taking me back to a very familiar feeling of not-understanding-anything-in-China…

We stayed at two different hotels at Dadong Bay in Sanya. There are apparently 3 different tourist spots to choose from in Sanya: Sanya Bay, Yalong Bay and Dadong Bay. Sanya Bay is the cheapest place, with the ‘least nice’ beach (although to me it looked pretty OK!). We went there once and found it OK, although a little bit empty in terms of life and people. Having said that, however, I should point out that now is not the high season for visiting Hainan. I believe that Sanya bay, like the rest of the island, gets quite packed during public holidays.

There’s also Yalong Bay, that’s said to be the nicest area with a lot of international five star hotels and private, beautiful beaches. Although we had intended to head over to take a look, we never made it. We simply enjoyed ourselves at the Dadong Bay area too much. There were so many restaurants, cafes, bars, shops and fruit vendors to keep us busy with, not to mention our hotel pool and the (very nice looking) beach. When we picked where to stay we read that Yalong Bay was quite expensive and maybe not so good when it comes to restaurant choices (unless you want to eat at your hotel every day). Neither me nor Willing are loaded in any way, so we felt that the five-star environment might not be for us (not in this lifetime…). Anyways, I really liked the liveliness of Dadong Bay and would recommend it to anyone who’s not going to Hainan for a honeymoon purpose.

Fellow Laowais who intend to visit Hainan, however, be aware! Everyone will take you for Russian, no matter what you look like. Now, I have lived one year in Finland (with a geographical closeness to Russia) so I thought I had seen a lot of Russians before (they tend to come to Helsinki to do a lot of shopping)… but when I came to Hainan I realized I hadn’t: because this place was like a mini Russia in a beach town! Russian shops, restaurants, locals speaking Russian, Russian men in overly small and tight beach shorts, insanely many women in string bikinis… We even spotted some fur shops!

The whole ‘oh another Russian laowai’ got tiresome pretty fast. Everywhere I went eager sales people came up to me trying to lure me into their restaurant/shop/fruit stall with some Russian ‘pick up’ lines. Most of the times I just walked by, but at times (when I was tired, dehydrated, and hungry) I actually said something quite nasty, like ‘”you know what, not every laowai here is a Russian!” in Chinese and walked on. This phrase was met with astonishment and laughter. One guy actually ran after me:

-Oh, miss! Sorry, I didn’t know! So where are you from then?

But I wasn’t in the mood for talking.

One girl in a shop must have been extra eager to sell, however, because when we pulled this line she looked at me and Willing for a long time, before she said:

-Yeah, actually… you guys look alike! Are you two sisters? (Willing is from Indonesia: she’s 10 cm shorter than me, half of my width, 20 shades darker, doesn’t suffer from the big-nose/big-feet-syndrome, and has skin that tans after 10 minutes in the sun). We stumbled out from that shop, laughing our guts out.

As for shopping though: it’s not to be recommended in the touristy parts of Hainan. Everything was quite pricey (for someone who’s used to picking up quite nice dresses for less than 100 kuai in Shanghai) and we limited our shopping to buying fruits only. The fruit shopping also proved tricky as we suspect there was something fishy with the fruit scales that the vendors used. We bought giant litchis (or King litchis as I believe they are called?) at one fruit stall for 10 rmb/ half kilo. Another vendor sold the same litchis for 8 rmb/ half kilo. However, his litchis were for some reason much ‘heavier’ than the ones we had previously bought, so in the end we got the same amount for the same money! Tricky business.

One day we caught a bus to a less touristy and more local shopping area (although I instantly suffered from the heat and caught the same bus back 20 minutes later! Haha!) which was much better. Willing spent some hours there and came back with bags full of exotic fruits and some cheap dresses.

OK, that’s enough for today I believe (did some of you fall asleep already?!). More Hainan photos and stories to come tomorrow! 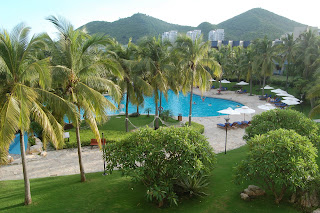 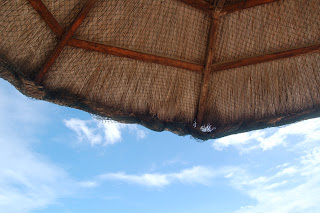 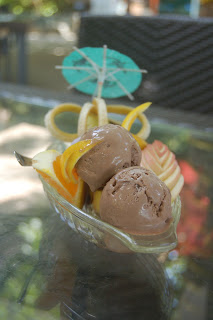 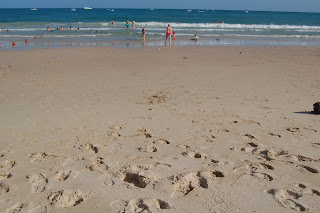 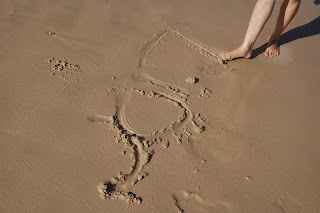 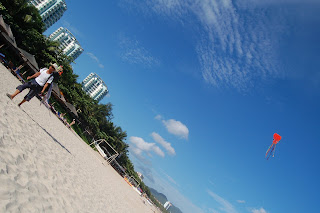 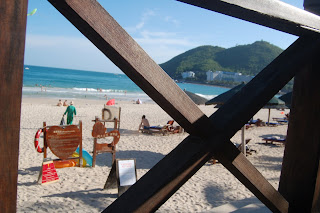 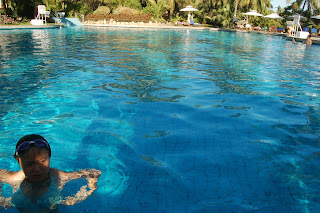 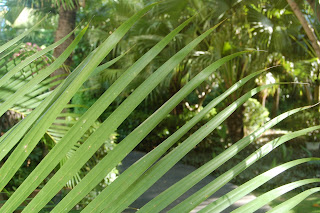 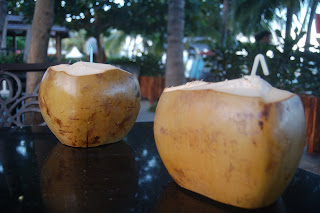 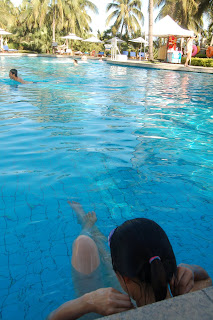 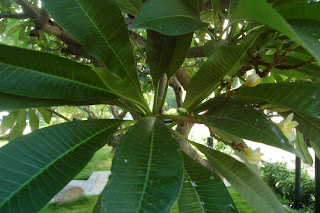 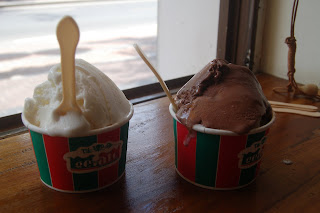 Posted by Jonna Wibelius at 6:11 AM

Hainan is great. We were in Haikou last year an really enjoyed it. May people were friendly (even down town) and when we spoke Chinese, they really lit up and were even more friendly. It's not near as touristy as Sanya though, but not as tropical and beachy either. Sounds like you had a blast.

For you, it's Russians; for us, it's New Yorkers!

Which hotel did you stay at? And if you don't mind, how much was it?It looks amazing!

Hey, I've been following you're blog for a while and thought you'd like to know you could get paid for it. I'm only starting my journey to china this summer and was just informed about this. glimpse.org its affiliated with national geographic.

Omg, after seeing your photos I look forward to Hainan even more :)

Navl -yeah I had a blast!! I never visited Haiku... maybe next time. I def wanna go back!!!

Anonymous -A full hotel report with more photos and all price info is still to come in the near future!

jane -thanks for the idea. Looks interesting... but only for US and Canadian citizens? Maybe i'll still give it a go.

tassomat0r -seeing the photos makes me wanna go back!!!! :) still some really good ones to come.

This reminded me of some of the tourist traps I ran into last week in Kuala Lumpur. I stayed in a tourist hotel, in the middle of the most touristy area of Chinatown, which is a tourist trap in itself. There was no escape. Well, almost none.

By the way, I'm glad to see you're the kind of girl that goes for a cheap place. It's more practical to get a cheap hotel room to sleep in so you can spend your money having fun right? That's what we did in Kuala Lumpur! We paid about 370 CNY for 2 nights there. Plus, the flight was only 470 CNY round trip from Singapore to KL. ^_^

Next trip will be our 1 yr anniversary getaway though. Gonna try to find something nice. Maybe Phuket in Thailand or Bintan in Indonesia, though my wife mentioned something about Sabah, and I think they have caves there I could explore.

I love reading about your adventures and ... oooh! Chocolate ice cream!

3 more weeks to go until the Summer Holiday and can't wait for my Holiday in Spain...

I am off to Costa Del Sol... any advice on what to expect there?

We have just added your latest post "Hainan -Dadong Bay, Russians and fishy fruit scales" to our Directory of Honeymoon Travels and Locations. You can check the inclusion of the post here . We are delighted to invite you to submit all your future posts to the directory for getting a huge base of visitors to your website and gaining a valuable backlink to your site.

I have been in both Dandong Bay and Yalong Bay.

Though Yalong Bay is much nicer, and I had my best dinners ever at a hotel there. All kinds of delicious fish, meat and vegetables you could imagine. It is still so pricey that I would rather recommend Dandong Bay as it is closer to the city, but then again is there really nothing to see or do in the city.