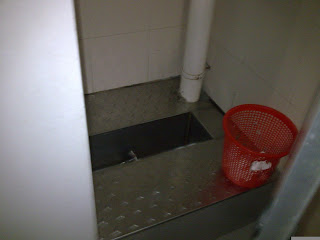 When I was 19 I moved to Australia to do my university degree. I thought it was a huge thing, and in a way it was. 19 years old. Alone in a new country. As far away from home as one can get.

However, I used my best social skills and quickly made friends. It didn’t take long before I got invited to some really ‘cool’ (I was 19, OK?!) parties, where all the hip Aussie kids were hanging out: surfers, Australian football players, meaty rugby guys and you name it. At one of those parties (a huge house party) I managed the unforgivable. I looked myself inside the bathroom. And in my clear state of panic, I didn’t want to cause a scene, or, become the ‘toilet girl’ so I sent a desperate, but discreet sms to my American girlfriend:

(This was after only 2 months in Aussie land. My English still had a lot of improvement to go through).

After about 3 minutes the whole party was standing outside the toilet door, giggling, asking me if how I was getting on, if I was really IN the toilet and if I could swim?!

Yeah, that wasn’t the coolest moment of my life.

One week ago at Suzhou’s train station, the story (almost) repeated itself.

The public toilets at train stations in China are quite… awful, due to one reason: no lock on the door. So while you’re squatting to pee, anyone can open the door: A nightmare for an already nervous pee-er. (I still don’t understand how guys can mange those rows of urinals?)

Since I’ve been ‘caught’ of guard (and almost fallen into the hole as a result. Even though I know it is coming I still get as scared every time) numerous times, I always try to hold the door, or, somehow prevent others from opening it. When I went to the bathroom last week, I realized that the toilet door to my booth had a lose metal spline, which I could use to my advantage. With some power I slammed the door so that the spline stopped outsiders from opening it. Ahhhh… relief. I could pee in peace.

Although… when I tried to get out of the toilet booth I bumped into some problems. The spline was lose, but just a little bit. No matter how I tried, I couldn’t push it back to where it should be and open the door. It simply didn’t work. And as a result, I once again found myself locked inside a (this time quite smelly) bathroom.

Seeing that I am way too tall for those booths anyways, my head was sticking up over the door and I quickly caught fellow toilet visitors’ attention.

-Ehh hello everyone! I am stuck in here. Can you guys help me open the door?

I was expecting giggles, condescending looks, or well, at least something. So imagine my surprise when three middle-aged women just started pulling the door without even pulling a face! In fact, every single woman who came into the toilet engaged in the door pulling game. I was pushing from inside while they were pulling from the outside. Still, we couldn’t get the door to open. Two women went to call for help (humiliating, oh, no just a little bit) while three others continued to push, pull and slam the door. Suddenly one got an idea and started lifting the door… after a collective effort we managed to lift and ‘bend’ the door enough for me to be able to climb out. A helpful woman caught me when I landed, and then everybody let go of the door.

-Thank you so much!!! I gushed. I had imagined myself not only missing my train but also spending some hours inside a smelly toilet booth at the train station while some giggling Chinese people tried to remove the door from the outside.

-Oh that’s nothing to thank for! Said one woman and went to wash her hands. And that was it.

I am so impressed by their helpfulness, not to mention the immaculate teamwork! No one cared that they were touching some smelly (and probably not the most hygienic) door, or that it was a large laowai who’d managed to put herself in this (I would guess quite rare) sticky situation. In fact, no one even took a minute to think about it. As soon as I said the word ‘help’ they were all doing their outmost to remove the door!

I somehow have a problem seeing the same team of helpers gathering to help a woman who’s locked herself inside the bathroom back in Sweden.
Posted by Jonna Wibelius at 7:33 AM

yikes. I could just imagine! haha ... well, thanks to those who helped, that you're able to get out and write about your whole toilet ordeal, I'm sure you were dying to get to the shower after. ^-^ ...

another great post that took me for an emotional ride, here in a library!

One of your best posts yet!

Congratulations on your escape. Sometimes we do just get by with a little help from our friends . . .

LOL. Jonna, that's just too funny. It reminds me when I had to go #1 and my body had other plans and I didn't bother to bring paper with me. So there I was, thankfully at my wife's dorm, calling for her to bring me paper. Of course, she's laughing histerically from my bellows but wouldn't you laugh at your husband if you caught him with his pants down? LOL

That's a funny story.
I would probably help someone if they were stuck in their own stall. Why not? :)

I have a shy bladder too so I never use urinals unless I am desperate to pee in which case even if there were six girls watching I can still do it.

It's true when Chinese people rally together they can achieve anything, because there are so many of them. It wasn't long ago our bus broke down and everyone got out to push with no complaints.

And sorry, I've seen your photo. You're not a big laowai!

This is why , I alway's carry a stick of Dynomite and a Match , with me to the WC .

It really help to get you out of those situation's .

Wo Ai, If I had 6 girls watching me pee I definately wouldn't be able too - but it would not be due to stage fright!

Instead of Jonna W, perhaps calling you Jonna Schwartzenegger would be more appropriate.

sassy -well the shower had to wait.. as I was getting on a train to SH and weren't coming back until evening... I guess u do what u do when u don't have a choice.

dfvxc -emotional ride?! haha. Cheers for that one!! :)

flyingfish -yeah, the 'friends' are great when they don't call you 'big nose' but rather just lend you a helping hand ;)

Kanmuri -in China, sure. In Sweden -not so sure. Sorry, that's just how it is over there.

woai -i actually had your recent bus experience in mind when I wrote this post. I applaud how people just get together and solve a problem over here... forgetting about manicured nails and pumps.

Shanghai Mifeng -hehe, yeah I bet. You never know what situations you're going to end up in on an average Friday in China.

Adrian -oh lord, ur nicknames are getting worse and worse!!

What a funny story, but neat that you got the help without the laughing. Hold on to that experience, because in the past with me the next time you'll have a whole audience of laughers with another unexpected adventure. (Oh boy I sound like the voice of doom - Sorry)
It was a great story !!

If you have ever watched the British comedy sitcom Coupling, this thing about toilets is well known. One of the guys had problems "declenching" when the door didn't have a lock. So he got himself a "toilet aid", a piece of wood that we could put under the door so that no one could enter while he was still inside. That doesn't work on public toilets, though, because there is always a gap down to the floor...

Or as the crazy character Jeff put it about the importance of locks: "You need security. You need to be able to say to yourself "I'm safe, I'm alone. No one's going to walk in and laugh. Mummy's gone to the shops..."

I think in this case it's just a matter of maturity, more than cultural differences. Perhaps if the group you had called out to for help had been young girls they might have reacted differently?

I don't know, but if some guy started calling out for help, especially in a place where a transport might be missed, I'd give him a hand no problem.

That is too hillarious Jonna, I think you just find ways to get into trouble, ha

I’m impressed by the effective rescue work done by a team of Chinese women. That said, the public toilet in China shall be better managed to prevent similar embarrassing situation from happening.

Pete -done! Holding on to it tightly!

Hans -never watched it.. (don't watch much TV.. only when I am sick) sounds real funny though!

Brad -naaaah I am not sure. The same troop of helpers would have never gathered as fast in a country like Sweden, that's for sure. Over there, a lot of people would have left or just stood watching... Also in the end, it was 2 middle-aged and one young woman who 'liberated' me from my toilet jail.

Phoenixxkid -yeah, I do have a thing about putting myself in sticky situations.. I've been like that since a kid. Fortunately, I can laugh at most of the situations afterwards.

Mia -yeah I was impressed too! :) I think they should just put normal locks on the doors and things would be so much better! I hate those open doors, I don't see the point??! Why should anyone be able to walk in on someone on the loo? ahhhhhgggh!

Ah, I see. Well, that's refreshing then. Do you often find that people are more friendly and "caring" in China, than in Sweden?

Brad -yeeeees, times 1000! Swedes are more polite but overly friendly by nature? Nah, I wouldn't call us that! (unless a bit drunk).