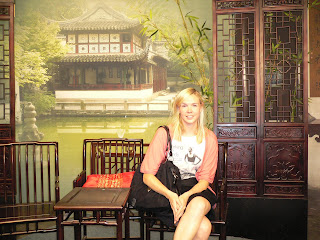 OK, so finally I’ve managed to upload some videos to my computer… that only took… one day?! Oh well, let’s blame it on the flu.

The TV show shooting went OK. Unfortunately I didn’t get to speak as much as I had expected though, and I don’t think that did me any favors. Rather, I believe I look a bit like a dumb, blonde just sitting there, wide-eyed, not understanding so much… Aooch, not an impression I love to make, but I’ll tell you why it went like that.

The show was about teaching foreigners some Suzhou-hua to emphasize the difference between this local dialect and standard, Mandarin (putonghua). The foreigners that had picked were me and a 5-year old girl who had a Danish dad and a local, Suzhou mom. I was happy when I heard about the half-Danish girl, and tried to speak to her (seeing that Danes and Swedes normally have no problems understanding each other. Besides, I am from the ‘Danish’ part of Sweden –the very south!), but to my surprise she didn’t understand anything.

So… basically. The 5-year old girl knew quite a bit of Suzhou-hua (her mommy had done a good job teaching her some), meanwhile I knew nothing. Result: the little kid looked like a whiz kid and the grown up blonde looked like an airhead. Oh well.

Still, before the show I was quite hopeful. I spoke to everyone involved in the shooting and received praises and compliments for my Chinese. Then the 2 hosts arrived: two middle-aged, heavily made-up Chinese men that, when I looked at them up close, reminded me of 2 scary kind of white faced clown. They weren’t very friendly, and it was kind of obvious that they regarded themselves as big TV-stars, and us as…. Extras.

They show consisted of two short interviews, one with the cute little half-Danish girl and one with me. First up was the little girl. She’d already won the heart of everyone simply by being adorable, and as a result, everyone ‘ooohhhed’ and ‘aaaahed’ to every little movement she made. When the dropped one of her flip-flops halfway through the interview, she almost received a standing ovation.
However, it took a while to shoot her interview. While she rocked the ‘Suzhou-hua’ part, the hosts also wanted her to speak some Danish. She practiced saying: “Hej mit navn er Catherine!” (Meaning: "Hi, my name is Catherine!”) with her mom 5 times, but once the camera was rolling she got all nervous and didn’t get any further than to ‘hej!’. For being 5-years-old, however, I still think she was a star!

The hosts then taught her some phrases that I have no idea what they meant, seeing that they didn’t translate them to mandarin.

Once they were done it was my turn. I had by then swallowed so many painkillers, throat relief pills and hot water that I felt a bit… out there. But up on the stage I went and was blinded by the strong lights. I was seated in the middle of the two clown-looking-hosts and then we were rolling.

Funny, because they knew I didn’t know any Suzhou-hua, still, as soon as we started shooting they said:

-Oh so this young girl is from Sweden, let’s hear her speak Suzhou-hua!

-Please introduce yourself in Swedish!!! They urged.

-HEJSAN ALLIHOPA!! Said the clowns. (their pronunciation wasn’t bad!) What does that mean?!

Big smiles from all three of us.

-OK, let’s teach you some Suzhou-hua, shall we?!

-ehhhh, can you say it once more?

The completely new line of words was said and the clowns looked at me expectedly.

-Well it means “where do you live here in Suzhou!” Now repeat after me!

I then had to repeat this totally new line of words and I could tell just from listening to myself that I didn’t do a good job. The clowns, however, loved it.

We went on like that for 3 more phrases, and in between they engaged in heated discussions in Suzhou-hua, leaving me sitting in the middle, looking like a lost misfit.
Still, I was waiting for them to turn to me and ask me what I thought of Suzhou-hua, how it compared to Mandarin, or at least give me a chance to say something more.

But then, suddenly, we were done!

-Thank you so much! You did great! They clowns said.

The show will air in 1 or 2 weeks (yet to be decided apparently). The producer was happy with my effort, despite me not saying that much, and asked if I would be available for future shows.

-Sure, but only if they are in Mandarin, I replied. The whole airhead look just isn’t for me.

I asked if they would put the show online but the answer is no… so I don’t know how I could record it? (seeing that VCRs are not ‘in’ anymore). I don’t even know how much of the footage of me they will use, seeing that I wasn’t that good.

Anyways, I recorded some short, 20-second footage with my mobile phone (not of myself though) that you guys can enjoy. I pointed the camera towards myself once just to get some evidence of my actual presence!

All in all, it was a fun experience but I wish I could have gotten a chance to say some more things. Oh well, maybe next time!

Labels: SHE in China in the media

This is so funny!

I almost fell down the chair while reading it!

What you've described sounds pretty similar to what I've heard from other "normal" people who suddenly find themselves being interviewed. It's not something they do often, so the excitement and anticipation builds up for days and days.

Then they find out they're only on for a few minutes and say a few lines and that's it!

But this is just a practice round for you. Soon, you'll have your own show....China Today with Jonna W.

ps: remember to be kind to the "Extras".

Haha, I know how most westerners hate dialects in China, just when you thought you have managed with learning Chinese, then you suddenly find that you cant understand anything of what they say anymore when u come to a southern or eastern city in China.
Although dialect on name its more of a a new language, diffeence between the Wu Language/dialect(includes the Suzhou Hua and Shanghai Hua and a big part of eastern china) and Mandarin is bigger than the difference between french and Swedish, and are in many way a even more ancient language than Mandarin itself with a long and proud history and culture. Another big dialect is the Cantonese, yeah, where the so called Ching Chiang Chong stereotype chinese pronouncement more commonly known in the west came from.
Anyway, if you live in eastern china, you should learn some:p

Every actor I've ever heard will say the hardest things to act with are KIDS & PETS they will always steal the show. The question is are you giving out "autographs"? I'd take one !

I think Jonna can apply for being a host in rediscovery China program.

Mark -hehe, yeah it is quite funny when I think back at it... I hope I get a second chance!

Adrian -yeah, that's exactly how it was! I suppose I made a too big of a thing out of it.. it just sounded like such a special thing.. 'being on a Chinese show'... and then in the end I ended up looking like a fool! Haha, quite funny if u think f it! Well, there's no Jonna W talk show coming up after this performance, that's for sure! :)

MJFeng -no way....!!!! not another 2 years on learning a dialect.. Mandarin is enough!!!! haha! Actually, that's just what I was hoping to get to say on the show but the opportunity never showed up. Maybe I should have just been a bit more aggressive and talked more? Although I bet that would have made those clown hosts upset de luxe... a laowai trying to steal their limelight!?? Grrrrr!

Pete -yeah, hard to do well when a child star already set the bar way too high... as for autographs... ehum, I don't think we are there (or will ever get there! haha!) quite yet.

anonymous -yeah I'd love that, sounds perfect for me. Now only one tiiiiiny little prooooblemo... the actual show? anyone got a spare one for me to host?! ;)

It is interesting that the two hosts are both male, normally there shall be one male and one female host. The two clowns just don't realize your potential and fail to let you fully present your language skills and personality. What a shame. Jonna, you can make it to the top talk show like 杨澜访谈，鲁豫有约，these two women are said to be China's Oprah Winfrey.

What a treat! I love the videos although I couldn't understand a word of it.