Another (lovely) visit to the bank 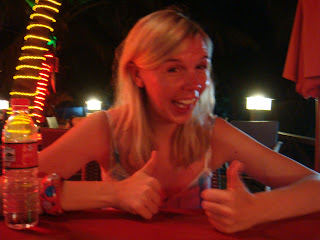 Last week’s Friday morning I went to an organization to pay a fee and was met by a phrase that you don’t often hear in China: “Oh, sorry. We don’t accept cash. You have to put the money into our account!”

“I have to put the money into….. but that means that I have to go to the bank?!” Yikes!

But wait, it gets better. Because I couldn’t go to just any bank. I had to go to the 农业银行 ‘Nong ye Bank’–the farmer’s bank. Wohooooo!

This bank isn’t as common as Bank Of China, so I jumped straight into a taxi and told the driver about my mission. He turned out to be a friendly, happy man who was totally up for the challenge of going for a “Nong Ye bank” hunt with me.

We passed around 83468346 other banks (or at least it felt like it) before we hit jackpot. As soon as I stepped into the bank I knew it was going to be a painful experience: Long lines of people that were standing disturbingly close to each other, and my presence resulted in the usual giggling (what IS it that is SO funny about me?! I keep wondering! A self-conscious person would die over here).

Since I’ve had the (un) pleasant experience of visiting banks in China before, I was determined not to commit the usual mistakes. I had a bagpack full of documents (everything from flight tickets to lease contracts to passport and student ID –you NEVER know what they want to see at a Chinese bank!), and, instead of simply lining up, I went to a bank man aka security guard sitting at a desk and told him about my errand. He stopped giggling as soon as he realized that I could speak Chinese, and just like that, I went from a ‘freak’ to a ‘smart laowai.’ (Love how that tends to happen more often nowadays). I presented him with my papers from the organization: some official documents with name, account number and so on. He glanced at it before he pulled out a drawer and handed me a slip. Tam-ta-daaaaam!

But his friendliness didn’t end there. Now when the ice was broken and he had realized that I was practically a local (…..) he wanted to ‘help’ me fill in the slip. Meaning: find out everything about my errand: Who was I paying to? How much? Why? Did I often come here to pay? Did I think the sum was appropriate? (there is no such a thing as privacy in China!)

We filled it together and then I went to line up. There were about 3 people in front of me, and 2 minutes after joining the line, there were another 6 behind me. The girl next to me was standing so close that when she coughed I could feel her breath in my neck. Mmmmmmm…. Fresh!

When I had been lining up for 10 minutes an old man suddenly arrived, and placed himself next to the line. He looked at us all, giggling nervously, showcasing some cash and a bankcard in his hand. He obviously wanted to put some money into his account, but, he wasn’t keen to line up. So he simply stood next to the line. It didn’t matter that the security guard came and told him. He still just stood there, giggling and waiting. And, when it was the man who was standing in front of me turn, the old man cut in:

I was just about to roll my eyes when the man in front of me said:

-Yes I do. Go and line up like everyone else.

The old man frowned and looked at me.


When it finally became my turn I handed over the slip, a bag of documents and the money. The bank clerk clicked and clicked, looked at the slip, clicked a little bit more, and then started saying something into the microphone, which, by the way, must be the worse bank idea ever here in China. It’s simply impossible to hear a word that people who speak into it says?! People speak so fast anyways and when they speak into the microphone it just becomes a mash of words that sounds like “shshhshshshhshshshssssshhh.”

Fortunately, my new friend, the security guard, was keeping an eye on me and it didn’t take long before he came to my rescue.

-She’s saying that the account number you’ve filled is wrong. There is a 0 missing. You have to re-fill the slip.

Some slip-filling, lining up and waiting later I finally handed over a slip with the correct account number. But the clerk still seemed to be having problems reading my numbers. In the end, she took a new slip and filled it herself. Then a nod and the magic words: Haode (=OK).

Done, for this time.

I immediately phoned the organization and told them about them giving me official papers with the wrong account number. At first the woman on the phone didn’t believe me, but 5 minutes later she called me back, laughing nervously and apologizing.

Well, that only took a good 1,5 hours of my Friday afternoon. And you want to know the best bit about it. In 2 months of so, I have to go back to the same bank. I seriously cannot wait!
Posted by Jonna Wibelius at 7:41 AM

Oh, that's histerical. We had a guy try to cut in the front of the line in the train station ticket area and he butted in and was somehow able to join his ticket purchase with the person who's turn it was. He had this goofy smile as if he knew he was out of line but somehow able to think the behavior was ok. Try the phone company next. I'd bet it's about the same. hehe.

what kind of bank u guys have in suzhou, here in shanghai u go in and get a ticket with a number on it, and u sit down and wait for your number, and yes even in nong ye yin hang.

Completely agree with you on Chinese banks. I don't think they have come out of the Cultural revolution as yet.

But its also true that in virtually every bank, I meet somebody like the security guard in your story.

Can't you transfer the fund electronically?

Another "lovely" experience in China, Jonna! I had been to Chinese banks numerous times and had never had such a "pleasant" experience like you had. I remember my last banking experience in Hangzhou, China five years ago, I need to get a sequence code when I entered the door and then waited to be called to be served by that No. without waiting in line. It did take quite a long to get my turn though.

OK I realize that living in Hong Kong makes you spoiled. Although there is the token busting into the queue, and all the red tape, the efficiency here is really good. I'll enjoy it while it lasts. Farmer's bank - here I come!

Anonymous -at Bank of China you get a ticket with a number on it... at Nong Ye Bank you have to line up. I guess banks are different everywhere. I obviously wouldn't have lined up if there was the ticket system.

Rameash -no, there's still a loooooot of improvement that needs to b done. Most of my Chi friends also think that the bank is a lot of 'mafan'

胡崧 -no, this time it wasn't possible.

Alan -banks are worse than visa offices over here... and that says a lot!

anonymous -yeah, TIC.... it's OK. there's a charm of it too I guess. If everything was like back home I bet life here would be boring.. and I wouldn't have anything to blog about... :)

NavlGazr -yeah you should... :) Well, obviously not all banks are as messy as the one I visited last week.

I like your blog. Its one of the better ones I have run across. It is interesting and informative too. I will be headed to china in the near future. Keep up the excellent work.

anonymous -that's great to hear! Thanks a lot!

Jonna, in China does the bank issue a keychain "token" that you use as part of the log-in process for internet banking? You first log-in with user name and password, then press the button on the token to get another code you have to enter. Some of the local banks here use that. One, DBS, forces it. Others offer it as optional.

My wife and I just switched our account to Citibank. It's the Singapore version, but it's a US bank so i feel better about banking with them. So far my wife seems pleased with the quality of their services too.

After reading your stories I hope I never have to do anything at a bank in China, especially since I can't speak Chinese. I remember the last post you made, where you had to go back and forth to your house for more documents.

Also, I think it's odd that the organization made it so difficult for people to donate to them. My first thought was what 胡崧 said.

Also, are funds transfers popular in Europe? I'd never even considered it before moving to Asia. Here it seems very popular to send and receive money that way.

I hate being in line & having someone breathing down your neck. EEWWWUU! I was in a line once where the guy in back of me sneezed right on my neck - I was grossed out - he just laughed, I wasn't so nice & informed him that he could use one of his body parts to cover his mouth....which would've been phyiscally impossible to do but, I was so mad I would have helped him into this position, if he had said anything else.

Jonna, I love your posts, they are so down to earth and give us a real glimpse of the daily struggles and yet little victories you get everyday. I know I couldn't do it. I have phobia about going to Gas Stations in America. The people are so crude and dirty and lazy both the employees and the customers.

Try like I did yesterday. Pay with dollars to a Taiwanese bank without a working visa.

With a business visa you can not pay more than 500$ out of China even with a bank account in Bank of China. At the same time as long as you want to pay to Taiwan the money must first be sent to an American bank that exchanges the money and send them to Taiwan themselves. The only problem is that Bank Of China refuses to give you the transaction fee for this, so you in the end have no idea how much money you need to transfer.

And the paper work for such a transfer is beyond stupid.

你很棒, Jonna! You handled it perfecty. Your stories make me smile :)