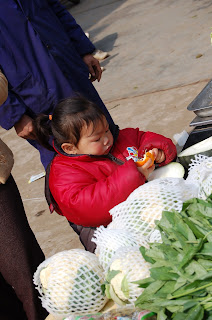 I won't have to miss China too much during my stay here...

The first day at work went well. I don’t know if I’ve made it clear, because a lot of people are asking so I better say it once again. I’m currently in Finland doing a 7 weeks summer vacancy at a media company where I used to work 3 years ago, before I moved to China. In the end of August I am going back to China, but until then I’m working full-time over here.

It’s strange to be back at a company that I left 3 years earlier. Although the number of employees have doubled since I left a lot of things still haven’t changed. The big boss is a Chinese man from Beijing. Very honest. Very straightforward. The first thing he said when he saw me in the meeting room yesterday morning was:

-Oh, I see our little Blondie is back from China. You know guys, 3 years ago this girl left our company to run away to China with her big love.

Polite smiles and muffled giggles. I felt kind of silly. “Ran away with my big love?!” What the f****?! And also, what boss refers to his employees as ‘little Blondie?!’

As soon as the meeting was underway, I also realized that things are like they always were.

It started with one of the guys arriving a little bit late:

-Oh Mika, said the big boss. Look at you. You look so tired and quiet. You probably have not slept well.

This was the standard back during ‘my days’ as well. Whoever came in late got a honest, slap in the face:

I can tell that the employees of today take it just as personal as I used to do back then. I particularly remember one time when the boss said I looked real ‘meaty.’ I swapped my lunch for oranges for the following 2 weeks.

Then, we went on to the meeting.

The big boss had just been to China and was supposed to give us a summary of what he’d been up to:

-Yeah, I had a lot of good, important meeting… made progress when it comes to the X project… and then I went to X province to meet with the head of X and we talked about xxxxxx….. And then I had to go to Beijing to comfort a friend whose wife just committed suicide… and then I had a successful meeting about cooperation in some sections with this xxxx group….

Me and my workmates were discussing over lunch. I mean, he said it so fast and so briefly that it just blended together with all the other, important meetings he’d had?!

After discussing it for a while and listening to the sighs from my workmates it hit me:

-This still happens kind of often, doesn’t it? Some kind of important and inappropriate information is thrown into a meeting about something else?

-Sure does. They said.

Yup, not much has changed! And it’s kind of interesting to get this ‘grind of Chinese spice’ in your every day life over here.
Posted by Jonna Wibelius at 12:23 PM

I went to a funeral of all Chinese-Americans. A "celebration of life".
Nothing sad but, nothing funny either. It was my first 'dry-eye-flat-line-funeral' ever and I hope my last.

I kept bowing my head and put my hands to my face to muffle my misplaced giggles. A couple read every syllable straight from the page:

..."when we met him, it was a very auspicious year for us but, not for him...his wife had died. Then we met Betty at the singles mixer..."
Ai-Ya!

I told my Chinese-American Mother-in-Law that she better have some interesting friends show up at her funeral, or I'm not going!
She got the joke and the message. She caught my giggles ;P

Your workplace sounds really interesting. At least it's not boring.

I have a theory that he does that to keep everyone's attention. If he just goes on and on about boring meetings people's attention might start to wander, but the moment a keyword like "suicide" is thrown in there, everyone's spot on with what he's saying, right? It may be a tactic he learned a long time ago to make sure people pay attention to what he says in meetings.

Little blondie, huh? He sounds like a fun guy to work for. Does it bother you?

Oh and sorry for the split comment but... aren't there a lot of "little blondie"s in Sweden?

Somehow, I wish I could edit comments here... damn you Blogger!

Sweden is supposed to be Finland in that addition.

Your situation sounds similar to mine I too work for a company that is owned by a Chinese family. They are very generous & want whats best for their employees. They like everyone else have their own personality & it sure is fun navigating around it too! I like Brads comment about there being a number of blonds in Finland... The part about the one "word" slipped into the morning meeting sounds interesting too.

Wow, I don't think I could work there. Interesting boss, to put it nicely

Jonna, I am going tomorrow to Sweden, Norway and Denmark for a vacation. I am getting so excited just reading about your time in Finland. I won't be making it to Finland on this trip but hopefully in the future.
When we moved back to the United States after living in China, I was so interested in the Chinese people that live here in my home country. I would be so curious when I would see an obvious couple that came from China in the recent past ie. their one child was still wearing split crotch pants and many layers of clothes in the summer. I just wanted to go over and talk to them about where in china they came from and how do they like our country. But, I have not had enough courage to do so. I totally get how seeing your boss is entertaining now that you have lived on the other side. Becky

The Chinese cuisine seems to have the best most succulent vegetables and leafy greens we rarely see in the west. At least we can thank them for that.

Brad -yeah, maybe your theory isn't that far off? As for the 'little blondie' comment... I prefer that to 'meaty' any day!

(there are loads of blondes in FI and SWE but this man is Chinese, remember. He still thinks that blonde hair is rather fantastic. Also, we don't have that many blondes working in our office).

Pete -yeah, it sure keeps things fresh and new... interesting at times. Terrible at times :) I guess that's the charm of it!

Emmy -nah, it's not that bad. One moment he calls u fat the next he takes you our for lunch and praises your work effort! And the page keeps turning! :)

Becky -wow, you're off on a real Scando holiday, I hope you have a wonderful time!! Right now the weather is awesome, let's hope it stays that way! U have to return to my blog and write about your feelings about Norway, Denmark and Sweden once you come back! Although these countries are very close to each other I still feel they are quite different... Have a great holiday!!! Make sure u enjoy plenty of good hotel breakfasts. Breakfast is the thing over here... fresh berries, yoghurts, cheese, loads of rye bread and stuff.. YUM!

Little Blondie!! hilarious! I think that he must like to give you that name considering he probably has a lot of people to choose from ( being in Scandinavia and all <-sweeping generalization, I know!). Anyway people with 'Little' in front of their names are special (so my mother always told me! )

What did he mean by you running away to China with your big love? Is your boyfriend Chinese? Kinda funny comment. Are the Chinese in China also behaving so casual and blunt? Well, if that's his best, then I don't wanna hear his worst :)

Jonna - I probably missed it but how is it a Chinese guy is running a media company in Finland? Your story is strangely amusing because you have left China to go work there, so you can still blog about the Chinese boss. It's interesting that even though he has lived outside of China he still sometimes acts inappropriately. Me and my friends sometimes say "you can take the guy out of China but you can't take China out of the guy".

tiger -yeah true.. Chinese people use 'xiao' in a very kind way..maybe I should feel honored?! :)

Nino -nah, the story he made up is complete bulls*. My bf isn't Chinese but Finnish.

Woai -that is so true! funny thing is that I can now understand his behavior much better meanwhile my work mates (who haven't lived in China) are completely lost when it comes to interpreting him... Well, just as lost as I was, 4 years ago!

If any Finnish (male) boss would call his subordinate "little blondie" it would be taken as something extremely sexist and inappropriate. There certainly would be strong reactions to it. And the Boss has been in Finland for quite a while, hasn't he? I wonder why people still tolerate his "straightforwardness"...