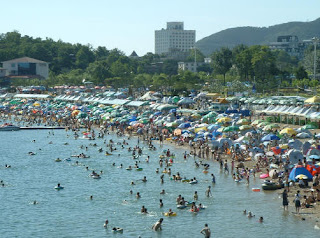 Summer in Dalian... I can't deny that I am thrilled to miss out.
Yeah, I figured it was about time for me to get out of Suzhou and find some inspiration in the northern part of China… so I will visit Dalian over 4 days in November! Really excited! Since it will be a combination of work/leisure I will have something like 2-3 days of free time so I am planning to be a bit of a tourist and go to Bingyu Valley in Zhuanghe (If I have time, apparently it’s a bit of a ride to get there), some parks/squares, a beach (although it is not swimming season I figured it can still be nice) and Russian Street… Is there something else I shouldn’t miss? (all of you that have been to/are from Dalian?). One of my Chinese friends often travels to Dalian and he told me that the food there is ‘nothing special’, kind of mild in its taste… This was kind of a surprise?! Normally he raves about food, but not when it comes to Dalian? I really have to check for myself. (I was expecting some nice dong-bei stuff and that’s well worth raving about).

I don’t actually mind that it’s going to be quite cold when I go there…Suzhou is sooo humid a.t.m it’s not even funny.. Like, what happened? First it was getting all nice and cool and then Sat: 27 degrees outside, not to mention yesterday. My plan to go for an outside run had to be postponed. Anyways, enough bitching about something u cannot do anything about.

Dalian travel advices, anyone? I actually don’t own (and I am not planning to become an owner of one either) a ‘Lonely Planet.’ I have understood they can be quite handy but I have never been big on the whole “travelling with a guide book.” I once bought one (for Indonesia I think it was?) and it stayed in my bag the whole trip, mainly because I forgot I had it.
Posted by Jonna Wibelius at 6:59 AM

Weird that your friend said the food is nothing special, I always hear people rave about the seafood in Dalian.

I would recommend visiting Xinhai square, Laohu Tan, and Golden Pebble beach near Kaifaqu. Check out these web sites about Dalian..

I thought Suzhou was getting pretty cold soon. Going to Suzhou on thursday and staying there for two weeks. I was there in November last year aswell, and then it was really cold

When my brother visited me in Dalian, I took him to a pretty wide assortment of places around the city. Here is where we went: http://tinyurl.com/12daysDalian
Dalian doesn't really have much culture unfortunately.

And if you need internet while you're up here, here are some places you can get free wifi: http://tinyurl.com/dalianwifi

Emil -yeah I don't know what's going on because normally at this year the temperature is quite pleasant. I guess it's just a hot week... hopefully it'll cool down anytime soon. U coming to SZ for 2 weeks? What's the occasion?

I just had two days there last year, but I really liked Suzhou. So looking forward to spend some more time there this year. Is there still any of those bratwurst corners in Suzhou?