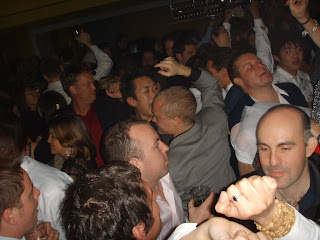 Friday night for some people 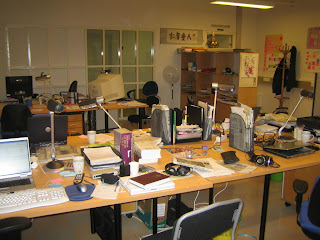 Friday night for some other people.

I have been up since 5am today (!) in order to be able to catch an early train to Shanghai, and still not neglect my morning routine (I looooove big breakfasts and reading newspapers online.. I devote maybe 1 hour/morning only for that? I know, most people just shake their heads when they hear how early I sometimes get up to be able to do this). Although it's Sat I have to do some work today, and I guess that's nothing unusual seeing that we are in Shanghai. Amazing how many people here who are working on Saturdays. My friend from Yunnan works a half day every Sat. It wasn't included in her contract, but then it suddenly became a 'must-do' and everyone who refused to got the boot! And what do people get paid here to work on the wknds? Well, barely nothing. I have another Chinese friend in Shanghai who works for a German company. When they hired her they told her she might have to work some Saturdays, although she would be compensated for it with overtime pay. She agreed, until she heard what the overtime pay was: 12 kuai/hour?! From an international company? I mean, try that thing in Germany and you'll get the union chasing you down... But in China you can get away with offering this sort of pay. My friend refused to settle for 12 kuai/hour, however, so they later raised it to 15kuai/hour. But still...

During my first year in Shanghai I was also often ordered to work overtime (especially Friday nights and sometimes Saturdays). Unpaid. Although my monthly salary was obviously higher (although not much.. I wasn't getting rich) so it can't be compared with the 12 kuai/hour deal... I think many foreigners come to cities like Shanghai expecting the work opportunities to be golden and the salary to be good, but one thing not to be forgotten is the overtime. Most people over here have to work late night and/or wknds, for as little as NO compensation at all. Just something to keep in mind (especially for all of you foreigners who are thinking about moving to a place like Shanghai and find work). Also, refusing the overtime isn't really an option as it normally just leads to you getting fired, and/or sour work mates.

I used to complain loudly about our late Fri nights and my foreign work mates (two lovely guys from the US and the UK) used to laugh at me and call me the 'union girl.' In the end they always sent me home a little bit earlier (if 11 pm can be considered early?!?!) meanwhile they were working well into the night. I guess they got sick of me whining, but seriously, you can only be creative for that many hours/day.

What about you guys -got any horror working-over-time-stories to share? From China or abroad?
Posted by Jonna Wibelius at 6:07 AM

I believe the new labor laws require any company to pay overtime if the employee requests it, at time and a half, or double time on holidays. They could get additional leave instead. (This is even for salary employees. If you work more than 40 hours a week the company HAS to pay you if you ask.) Plus, if you are still working and they haven't renewed your contract, you are entitled to be paid double your monthly salary.

I'm not sure how many Chinese companies actually do this, but as a foreign company we have spent a lot of money figuring out these new laws and how to obey them.

This really depends on your occupation. I've worked 120hours in one week once...and at least 80hours each week for a month straight.

in Asia i see how it's different. I have a relative who holds a SVP position in an American company in HK but still have to work weekends and long hours. It's frowned upon to leave (8-9pm) early than everyone else even though your work is complete but yet still have to look busy. In the US however, there's exempt and non-exempt salaried workers. Overtime is paid when necessary work needs to be done after 5pm. Workers are looked upon as non productive if they can't finished their work on time and have to stay late.

In the industry I was part of in the US, it was a known fact if you took a salary deal rather than hourly wages you were screwed. Pingu's numbers sound all to familiar. Luckily, there was never any doubt we would get paid the OT, but sometimes that isn't worth it. Hence why I needed a break and ended up in Beijing. (:

the company for wich I work (obviously not in China) pays the half day on saturday as a whole day, so everybody works with all the energy