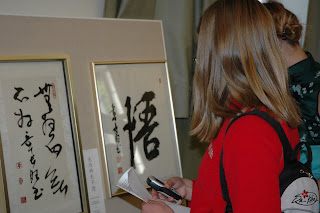 Don't hang anything on your walls...

Before I move to China I worked for a media company in Scandinavia... run by a Chinese man. He was the owner and the big boss. A biiiiiig boss: business man from Beijing, married to a Scandinavian woman, three different companies only in five years (or so?) in Scandinavia and God knows how many businesses he had in China?! Still, I found him quite nice and established a good relationship with him. Although he was mega-busy (I can't believe he never got an ulcer -he said it was because he did taiji every morning) he would always make time to take his staff out for lunch, sit down with every one of us and ask about our visions and plans (If he listened or not I don't know... but I appreciate that he made the effort).

Since this was my first contact with someone from China (unless u count my visits to the dingy 'China box' restaurants in Copenhagen?) I had no idea what to expect. And I definitely didn't understand that the culture shock was going to be so big. I mean, we were both in Scandinavia?! But still, my boss often managed to make me feel as if we were on 2 different planets.

In terms of introducing me to a female business partner (when we were on business trips) he was always spot on. Polite, and raised me to the sky. When he introduced me to a Scandinavian businessman some days later, however, I heard him whisper loudly into the man's ear:

"It's great to finally have some young, hot woman working in the office!"

I don't know who looked the most uncomfortable. But I believe it was a tie between the Scandinavian businessman and I.

Before I started working for the company I had no idea how weight/height obsessed Chinese people can be, but I soon learned. My boss actually didn't comment about my height too much (He just asked how tall my parents were and when I said 'taller than me' he nodded understandingly) but my weight?! Oh lord, where do I start?!

Well let me tell you this much: during the one year I worked for this man I knew exactly when I had lost or put on weight. My boss always commented on it. Normally I didn't mind, because I was so into sports and exercise that it didn't bother me if he said I looked 'skinny' or 'a bit fat'.... but then I slipped on an ice spot and broke my foot, just before Xmas (yup, I have never been the gracious kind) and was told that I couldn't run or exercise for 6-8 weeks and went down into a black hole of grief as I knew I was going to lose everything I'd worked so hard for. I had been training to run a marathon that spring so I was in a tip-top shape... As a result of not being able to fulfil my marathon dream I became very grumpy. So, when my boss came to work some weeks later and saw me with my cast-covered foot on one chair, and my other on the ground, and said:

-Oh Jonna! I can tell you cannot run anymore, you are looking rounder by the day!

I wasn't the only victim of his 'weight comments' though... One of my work mates, who had been trying to lose weight for a good 6 months were finally having some success when our boss suddenly told him:

Well, obviously we all learned just to laugh away the weight comments most of the time. But sometimes it really got to you, like that time when I was in the cast. Oh well...

We couldn't hang whatever we wanted on our walls. We couldn't put our desks and chairs like we wanted to. One day he came into the office, looked around and just walked out again. Clearly upset. It turned out he had felt the bad feng shui in the walls.

Some months after I started working at the company our boss decided we needed a bigger office space and the hunt for 'the new, perfect office space' took off. Two girls were assigned the task of office-hunting and we all got excited about moving to a bigger space.

Finding a suitable office proved quite easy. After only two weeks one of the girls had gone and seen at least 3 suitable places. When she brought the big boss there, however, the dreams were quickly crushed. If it wasn't one thing it was something else. Most often it had something to do with bad feng shui.

The girls kept looking and for months they were turned down. Then suddenly they found something really prefect: a large, open office space with a separated production room and an ability to have a large studio. Our productions team was over the moon. Since our Chinese boss was away when the girls found it some other guys, including the production team, went to have a look. They all came back with shining eyes. The place was apparently perfect. Now all we needed to do was to get approval from our big boss and then we could start packing.

When our Chinese boss came back he went to see it with a guy from the production team. To get to the office they had to walk up two stairs. At the second chair, our boss stumbled and fell. And that was it. He didn't need to see anything else of the office, he already knew it had a unfriendly and bad feng shui about itself....

The production team refused to talk to our boss for the next two weeks.

I worked for this company for one year. I learned loads and had a great time, exploring China and learning more about Chinese customs and cultures. I also learned that patience should be your best friend when dealing with feng shui.... When I eventually resigned my work mates still hadn't been able to find a new office space.

I remember that back then, I found this boss to be on my nerves more than once. When I look back at it today, however, I can’t help but laughing. I can’t believe I actually decided to move to China after that year?! I guess there was some charm to it after all.

Posted by Jonna Wibelius at 8:20 AM

One of the toughest parts of living in New Zealand for me is that, every time I saw my Western friends, I have to remind myself not to comment on his or her weight/body shape. I know it is going to make them uncomfortable, but I still cannot help but asking what's wrong with that? Because it is just so natural in China, it is something I take for granted.

People do it for fun, for care, and for a lot of reasons.

As for your experience, I have to say
你和中国有缘分

Mark -I just don't understand the point of commenting on other people's body shape... like... why do u do it?? Is it just a habit? I just think it must be awful for the chubby one to hear over and over again that s/he is a bit round.. I bet s/he already knows!? Don't people ever get offended?

Mark, my brother, it's time for you to question and learn. I am Chinese myself. Many Chinese are thinking like you. They tend to find people from other cultures odd if others don't do what a Chinese would do. Like, what's wrong with commenting on your weight. We live in America and had a Chinese nanny a few years ago, who liked to go out on her PJ. She found it offensive when I told her not to wear PJ outside the house. She would say, "Why not? We in Beijing wear PJ all the time when we go daily grocery shopping in the morning." One time she would even complained that American women wore too little when they were out jogging. "My PJ covers all of my body. Look at those American ladies. They wear shorts and sleeveles shirt when they are jogging." Oh brother! I can never win an argument with our nanny.

Hi, Jonna, my reply is bit too long to be left in comment section--1750 words, so I sent you an email.

Just feel free to have it on your blog and tell me what you think.

===========
Anonyous
I do not think people from other cultures odd if others do not do what Chinese do. I am just trying to put my feet in the shoes those Chinese who do actully think that way, try to understand them. I did the same before I went outside China, but being in NZ from more than 3 years. I would say, it's just about being different, there is nothing wrong with BOTH sides.

But all in all, understanding is the most important part