The 'monkeys' are in town 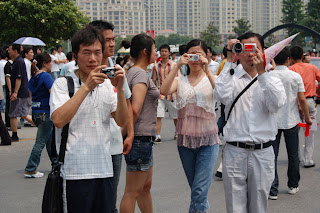 There's quite some difference between walking the streets of Shanghai and the streets of Suzhou. When me or my bf (or worse, both of us) take a walk in Suzhou we always bump into curious stares, distant 'hello!!!'s, giggles and finger pointing. None of us have any problems with it. We have realised that since we are both tall (him being 185 and me 175 cm -qualifying is as minor 'giants' in China) and blond, we really DO look like monkeys that escaped from the ZOO. So that one's on us.

Once we head to Shanghai, however, it's like... all the novelty wears off. No one cares anymore (or OK, maybe some but we get far from the 'fame factor' looks that we get from locals in Suzhou), and no one thinks we are special. It's almost a bit weird, because Suzhou and Shanghai are so close, yet so far apart. In Shanghai we are just 'another 2 lao wais' together with thousands of others (anyone got any idea of how many lao wais there are in Shanghai? I haven't got a clue but I am guessing quite a lot!) Suzhou also has a fair deal of expats, but not far as many as Shanghai.

Both me and my bf really enjoy walking around in Shanghai and not being followed by curious looks. What we had totally forgotten about until just the other day, however, is that this is the norm until u do something out of the ordinary, like decide to shop from a street vendor.

Yeah last week we were walking on one of my fave streets of Shanghai, Fuzhou Lu (simply my fave street for the fact that it has a huge foreign books shop... ahhhhh!) next to People's Square. Fuzhou Lu is one of those streets that always tends to be jam-packed with people, no matter what time of the day you go there. Being there during the National Holiday obviously added some extra hundreds of people, so yeah, it was a pretty jammed street that we were walking on. And you guys know the deal: if there are a lot of people walking around, there are also a lot of people selling stuff...

We walked by a bunch of street vendors selling everything from squishy toys (WHY?!?!?!) to key rings, when I spotted a man and a woman selling advertisement posters/vintage Chinese propaganda posters. A lot of them were really cheesy, and there was also a lot of Mao posters, but some were really cool, from what I could see. We decided to take a closer look and approach the man and the woman who were sitting on the street with their posters, no one paying attention to them.

I wonder how long it might have taken... maybe... 20 seconds? Well, OK, let's say 30. We started talking to the couple about the posters and about how much they were and so on, and, no kidding, but within 30 seconds, a HUGE crowd had gathered around us. I was so busy haggling that it was my bf who noticed, telling me:

-Have you seen the amount of people around us?!

And then I saw. People had formed a minor circle around us, extremely curious to find out what we were buying, and (more importantly) HOW MUCH WE WERE PAYING... I could hear chuckles and comments when I did my best to get an as low price as possible. Except for those who wanted to know how much we were paying, some young couples also started flicking through the old looking posters, acting genuinely interested to buy some for themselves. One of the vendor realised his luck and became extremely friendly, giving us some extra freebies (stickers, key rings, and you name it) and a fairly low price for the posters (around 20 kuai? I thought that was OK, although I bet the Chinese wouldn't pay more than 5 kuai!) as he now was keen to take care of all the new customers. We left the street with 4 posters and 20 key rings (or something like that), leaving a large crowd of Chinese people behind us, some buying posters, some just looking.

In a way, you just want to laugh about it -why is it so interesting to know what lao wais buy?! On the other side, I bet it is quite fun for native Chinese to listen to lao wais talking Chinese and trying to push for a cheaper price, knowing that we can never do it as well as they can. I am always happy to 'entertain' (I think u have to be in China otherwise you'd be offended every time someone laughed at you -and gosh, that happens on a daily basis!) but sometimes I really do feel like an odd animal who escaped from my cage at the ZOO.
Posted by Jonna Wibelius at 7:37 AM

One of my dad's coworkers lived in China for a while. Some of his friends were actually paid to just hang around in a bar. It wasn't much, but they got free food. I guess this is just like your experience. Foreigners attract more business.

Being special can be a burden, and not always a good one.

I recalled last time when I tried to use fork to have rice while the spoon was available, my Kiwi friend seat next to me was surprised and said loudly :"Wow!you use fork!"

We are just in some kind of assumed position of difference, no matter what we do, how we behave. When in a foreign country with this huge cultural gap, native people just look for our specaility and treat them as a way to confirm their own stereotypes. It's really sad! Altough they mean no harm.

Most of the Chinese people around you were just curious about laowai and not meant to offend you at all. You know how many Chinese people walking in the streets of Shanghai are just like you who are from out of town. They did not have much chance in their life to see foreigners in person.

I'm (ethnically) Chinese and even I get looked at frequently, perhaps because I dress differently to locals. You react far better than me. One day when I was not in a particularly good mood I shouted "what the f*** are you looking at?" to one Chinese guy. I felt bad afterwards, because I think it was the security guard at my apartment on his day off!!

Is the book shop at 390 Fuzhou Rd which is on the left if you are walking away from People's Square towards the Bund? That shop has a very good selection of modern literature, not just classics like Dickens and Jane Austin.

tripfriend -amazing.. although it doesn't amaze me... once we went to a bar and the bar staff asked the Chi people already standing at the bar to make way for us... just because we were lao wais. We actually left.

Mark -No there's no harm in being curious as long as u r not being judgemental.

Shan -I know that there are many 'out of towners' in Shanghai so no.. I don't take offense if they stare at me. Although sometimes it does get to me. Like it would to anyone. Even the monkeys at ZOOs I believe...

Woai -well I have also had those days... I've never yelled at anyone though, although I have been close. Just today I went to a small post office in Suzhou.. hahahha! It was like all business stopped because people were so busy looking at me, at what I was doing, which line I was standing in etc etc... I almost felt like asking them 'hey, what's wrong?! I am here to post a letter, isn't this the right place?!' but of course I didn't.

I'm in Shanghai with 10 Irish people (lots of red hair and pale skin). We get starred at alot when we're in large groups. We've been insulted a bit on the street.

Just today a women shouted at us. I understood her insult and shouted 'Ni you wenti ma?'

No matter where you are being insulted by someone who thinks you don't understand is not fun. We get called names every so often - but most Chinese are lovely.

seanisbored -are u sure they r shouting insults to you?! That sound really strange?! I have seen people giggle and laugh and whisper about me but I have never been insulted to my face... What were they shouting??! Now I am really curious!