About the ongoing (?) translation frenzy.... 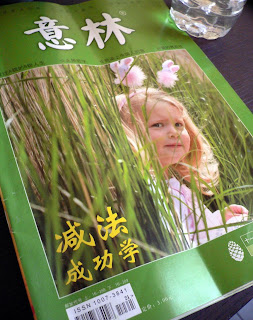 Wow, this is something between weird and ... weird?!
Emails and comments have been dropping in from all over the place: people have told me that a lot of Chinese online newspaper/pages, including Sina, have translated my post 'Chinese man + western girl,' into Chinese and posted it on their page.

First, to answer the most common question asked by people:

No, I didn't know about this and no, no one asked for my permission.

I actually don't know if there is any 'rule' applying to blogs? Can people just translate blog posts freely and post on their paper? Well at least in China it seems so!

I am not angry/upset in any way that they have re-posted my translated post (although I hope the translator did a good job! haha!), but more like, startled. (as one person who emailed pointed out: 'you should be flattered that they found your post worth while to translate....') Although of course it would have been really nice if they would have emailed/called and told me, or/and if they would have published a link to my blog. But they got my name right, and cheers for that, I don't have the most common surname (or first) name in the world... in fact, it's almost a 'one of a kind'-name, and I think I can confidently say that I am the only person carrying the combination of my first name and my surname in the world... (oh man, does that sound cool or smug?!)

Apparently, however, this 'translation of my blog post' has been going on for a while. I have been getting emails from different people for a while now, who have found my translated post on different Chinese pages/online papers. Just the other day I bought myself a 3-kuai copy of 意林 magazine, who has accompanied one translation of my posts (this one) with a cute little illustration. Kind of weird (but fun!) to find your post in a Chinese magazine?! I just wish my Chinese was good enough for me to do the translation myself (but yeah, as we all know, that ain't gonna happen anytime soon! But nothing wrong with dreaming right?! Besides, you should set high goals for yourself, isn't that what they say?!)

I should also mention that there are other (English) publications/web pages who have re- my blog posts AFTER asking for permission. So it's a combination of good and bad I guess. Anyways, any translator reading this, thinking about translating it and sending it to some Chinese page: please let me know!!!!!!!!!!! I mean, wouldn't you want to know yourself if someone translated your stuff??

For all of those (translators, readers and others) who have notified me about my translated posts, via emails or blog comments: thank you!

Oh, and btw... hihi... I showed my '意林' article for my Chinese friend Rocky yesterday, feeling a tad bit happy that he could finally read something I have written. I was expecting him to be over the moon, but when I asked him what he thought he said:
"Well, it was OK I suppose, but I think it is written for western people, not Chinese. I don't think many Chinese people would share your views."
Aoooch, so much for being confident?! Haha! Well, actually, I loved the fact that he was so honest. He also mentioned that my writing style (translated, but still) apparently broke all the rules for Chinese writing... hm... maybe that '写作' class I am currently doing will do me some good?

Oh, and another btw... a 'normal' blog post will come this afternoon. This translation stuff just got me a bit side tracked this morning.

Posted by Jonna Wibelius at 7:16 AM

Labels: SHE in China in the media

Although I am not a man of law, to my knowledge, evidentally it is illegal in China to translate and re-post a blog post for a business use without the author's permission. In the case of Sina's use of your post 'Chinese man + western girl,', however, the problem is that Sina.com of N. America, who re-post your article, has their web-server located in America and your this article was originally post in your blog of blogspot.com, whose web-server is also outside of China. That is to say, this offense may probably not have taken place in China and should not be applied to Chinese law.

Hallo Jonna,
i just found the your article about "chinese man and western woman" translated in website http://news.wenxuecity.com/messages/200810/news-gb2312-726757.html

It is because yours is a very well-written and interesting blog. By far the most interesting for Chinese-cultural topics I have read.

I guess it will be useful if you put up a copyright declaration on the gadget section.

Here are some examples
当年明月(In this blog, the author permit copying with conditions like name the author, and that's all)
http://blog.sina.com.cn/s/blog_49861fd5010003jn.html

郑渊洁（same as above, the declaration is on the middle left section of blog)
http://blog.sina.com.cn/zhyj

btw
This is the email addressof the magazine

You can email them a protest letter.

Also, they have two other mailboxes

Your friend Rocky is quite right.

Most things written in English about China are generally from a White person's point of view. Even if written by an Western born Chinese, it's still a Western point of view.

Let me give you an example. This might make some people unhappy, but I believe it is worth mentioning, simply for discussion.

For instance, many people think Asian men are more feminine.


The major assumption here is that White people are the Gold Standard to be compared with and is actually a sign of hypocrisy.

Well, anyone who goes to an Anglo country, like the US, knows that Westerners want the "ethnics" to speak the Western language (English etc), since that's the language spoken by the majority.

Taking this further, that majority rules, since China's population far exceeds that of all other countries, the behaviour of their men should be the standard that all others are compared to.

Which means that Asian men are not more feminine than Caucasians.

So that means we should compare White men to the norm.

In fact, it is the Caucasians who act more aggressive, drunkenly and engage in more chest beating.

Of course many, if not most people will disagree with this and easily find holes to poke through this.

But my point is that Westerners do believe their country and culture is the Gold Standard, and is the one to be compared to.

Westerners believe that THEY are the normal ones, and that non whites are to be judged, either consciously or unconsciously, whether they measure up to the Whities.

Have you ever heard a White person referred to as an "ethnic" before?

Now, this doesnt mean that Caucasians are an evil race that is the scourge of the Earth. Very far from it.

In fact, lots are a darn sight more friendly than the average Asian in public.


I will now bunker down and prepare for bombardment, if Jonna feels this is not too inflammatory....

On a different note, your blog seems to be very popular. Influence equals power.

Remember what the Peter Parker's Uncle once told him:

Adrian -of course Rocky is right! We come from different cultures and share different views. When I say that I think some Asian men in general are more feminine than western, I obviously mean this from my point of view. This is not facts, but simply my opinion/idea from my personal experience...

Mark/Anonymous: Yeah, I don't know if I should protest. It's already been published (all over) so what can been done? Obviously it is good coverage for this blog, but still, it would have been nice if they would have asked, or at least notified me first!

well,I read your translated article and like you said your name is so unique that it won't take long to find here. It is really cool btw. I wish my name is not that common. BTW,I like your English writing style. It is really a joy to read. Cheers

hihi, I found your thread in Chinese again on the forum, the one about why you think asian guy can not hang out with western girl.

Just searched "为啥中国男孩约不到西方女孩" on google.com. Your posts have been spread around everywhere online.

You probably should establish a Wordpress blog on your own instead of using blogger's service. It will help you to promote your contents. Your writings are always interesting, pahaps you can start a journalist career (as hobby?) in China.

At least a chance to view your opinion to a much wider audience even you didn't intend to do so at the first place. There are grey areas where Chinese media can try hard to play with to hype themselves, or they simply won't bother to ask author's permission before publishing stories. I myself haven't worked out why less Chinese guys can have relations with western girls. Culture barrier is normally the one to be blamed, or is it?

Get an intellectual property lawyer. Sue Sina.com and other infringers.

The key issue is not about ethnicity. Ethnicity defines people who consider themselves, or are considered by others, to share some common characteristics (e.g., racial, linguistic, religious, and cultural) that differentiate them from the other collectivities. In this case, White Cucasian are an ethnic group as much as the Chinese. And you do hear people referring to White Caucasian as 'ethnic'.

In contrast, ethnocentrism is the key notion here. It describes the practice of making assumptions about other societies in terms of one's own cultural assumptions or bias.

Now, I think that ethnocentric evaluations happen everywhere, not only in the western world. Chinese also makes judgements on other people based on their cultural bias. It is perfectly natural.

Too mcuh ethnocentrism can be harmful because it can lead us to think that the way something is done in other societies is inferior to the way it is done in our own society.

However, avoidance of ethnocentrism, if pushed to the extremes, can make comparative cultural analyses so relativistic that it becomes impossible to aply any universal cognitive or evalutative criteria, such as, for example, criteria of rationality or universal moral standards.

Therefore, a good balance between ethnocentrism and relativism is necessary when judging other cultures.