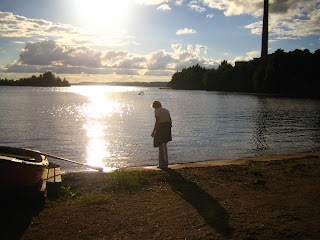 Some of my bf's Chinese work mates are going on a business trip to Europe, which includes a stopover in Helsinki, the capital of Finland. The first thing they did when they found out was to run over to my bf's desk and ask him:

-Are there any Chinese restaurants in Helsinki?!

Interesting how the mind works. While as I would probably first think: 'oh, how cool! I want to see this and this!' they instantly start to worry about what they are going to be fed.

Not that there's anything wrong with that. I know many Swedes that travel to Thailand or Spain (popular beach destinations for Swedes) and head to 'Svenske Viking' ('Swedish viking') to eat meatballs and potatoes every day. Not everyone like to try something new, food-wise. But I sometimes feel it can be a little bit exaggerated by Chinese. Some guys that travelled to Finland before packed their suitcases full of 2-minute noodles, dried snacks and crackers. The were seriously worried that they wouldn't be able to find anything to eat in Finland. Is European food really considered THAT bad in the eye of a Chinese?! I mean, nowadays they eat stuff like bread, rolls, pasta and pizza in Chinese cities too.. All of that u can also get in a country as Finland, and it is not THAT different!? Or is it?! Is it really that bad?!

When u come as a foreigner to China (especially for business) you are more or less expected to be willing to try all kinds of Chinese foods. The Chinese are so proud of their food and want us to like it. Before when I travelled here for business it was never a question of 'what and where would you like to eat tonight?' but more like: 'we are going to take you to an authentic Beijing restaurant and have you try this and this....' And of course I was happy to go! I think it would be kind of insulting if I would have gone: 'Ehum, do you mind if we just eat at Starbucks instead?!'

Being fed Chinese food during my first trips to China, however, wasn't any problem for me because 1. I like trying new things, and 2. I actually enjoyed Chinese food from the start. But I find it a bit funny that Chinese people are so eager to have us trying their meals and then they run straight to a Chinese restaurant as soon as they travel overseas. I am not saying that there is anything wrong with liking the food where u are from and being a bit suspicious towards new tastes and food (one of my Swe friends went to Hong Kong and ate at Pizza Hut every night!) but sometimes I think they are making it too much of a big deal... They are just going to be in Finland for 2 days or so.

Another, funny example of this occurred in 2005 when I was working for a Chinese company in the town Tampere, in Finland. Since the owner of our company was Chinese our office was often visited by Chinese delegations that the owner had invited in order to show his 'international team of workers' and 'his new country of residency.' (Believe it or not, but Finland is quite beautiful). One time, a delegation arrived when he was busy and he assigned the task of 'showing them around and introducing them to the best of Finland' to our secretary, who took the task at heart and did her outmost to plan a nice and interesting, 3-day program, including visits to traditional Finnish restaurants, sauna (a MUST-DO in Finland!), visits to cultural spots, trips to lakes and so on...

After half a day and one visit to a Finnish restaurant the head of the delegation told her that they wanted to eat at a Chinese restaurant and see Santa Claus.
The Chinese restaurant was an easy fix (when the men got their food they gushed over it as if they hadn't been fed properly for 10 days... grown up men! Imagine that!) but a visit to the Sanka Claus village in northern Finland?! Well that was more like, a flight away.

Our secretary called our company owner and expressed the wish from the delegation. He replied:

(In case someone is shaking their heads at the word 'Santa Claus' I guess I should mention that it is 'true.' There is a Santa Claus village at the Arctic Circle Rovaniemi in Lapland in Finland. Very famous apparently)

So they all went. And that was their visit to Finland.

After that, planning the program for Chinese delegations was easy: a visit to the Santa Claus village and some Chinese restaurants. They were always very pleased. 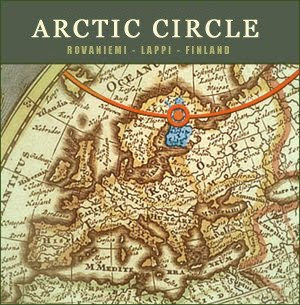 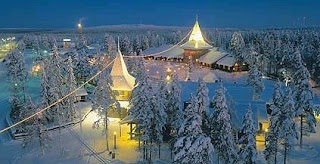 Santa Village (pictures from: http://www.volko.com/santa/santacam.htm)
Posted by Jonna Wibelius at 7:05 AM

My father once (and the only time)went on a business trip to Australia,the UK and the US (although he cant speak English at all..). When he came back he complained to me how bad the food was and how the instant noodle and chinese salted vegetables (榨菜)saved him.
No.1: How can they eat tasteless raw vegetables?(salad)
No.2: Omg they even eat raw meat!(steak)
No.3: I could never feel full without rice!
No.4: Should I use the table knife in right hand or left hand? and the fork??

Jonna, even expat Chinese living overseas for 30 or 40 years will still stick to Chinese restaurants only. I am an expat Chinese living in the U.S. and have commented on your blog before about how salty and greesy Chinese dishes are. I am one of the odd ones. Almost all of my Chinese friends think I am being pretentious whenever I tell them I would prefer cleaner, less oily dishes like Thai (lots of herb and ginger), Korean (spicy, less oily) and good hearty American food. For most Chinese, if you don't eat Chinese food, you are a sold-out. Serious. Of course, in the begining, everyone needs time for their stomach to adjust to a new food. I completely understand Zhou's comment above. It's understandable. But for those expat Chinese living in America for 30+ years and yet still refuse to even try other food is total nationalistic and narrow-minded. Trust me. I know what I am talking about. Sometimes it's a blessing for Americans not to understand the Chinese language when Chinese comment on their food.

I hear you guys... and it's fair enough. Chinese people love their food... fortunately there are Chi people all over the world -making it possible to Chinese to travel to different countries and still be served food that they are used to.

I love your dad's comment, Zhou:
'how can they eat raw vegtables'??!?! Salad that is soooooo good! But I understand that if you are used to eating everything cooked, eating raw food would be considered strange. We had a discussion about this in class yesterday and our Chi teacher pointed out that he thought Japanese were strange, eating raw fish... he said:
'well apparently it is really healthy but still... the fish is raw?! So strange! I couldn't do it', and I know many people, western and Chinese, who agree with him.

So true! I am a Chinese American girl and when I was growing up my parents only ever went to Chinese restaurants. This one time a Chinese delegation came to my Chinese school, and they were happy in general with the trip to the US but sad about the food--they said they were going to a Chinese buffet for lunch. When I was working in Tokyo this summer, my coworkers kept asking me if I missed American food--and I always answered, "no, but I miss Chinese food!" And it's so true; although I've spent the bulk of my life in the states I ate Chinese food for most of that time. Personally think it's the best, but I also love all food in general, and would try anything. : )

Chinese food is part of Chinese identity, a real important part, like a religion.

I mean, usually, believers of of religion like to see other people convert into their faith, go to their church, but not the other way around.

However,I doubt if these Chinese workers will feel satified about the Chinese restaurant in Finland

My parents have been to NZ and AU before, they did not say anything about Western food, but complained to me that the Chinese food they had were 不中不西--Neither Western nor Chinese.

Food can be impious!

. .to say nothing of how some foreigners behave when they go to China. At a college in Jiangxi province where I worked, a teacher from the USA refused to eat Chinese food. She claimed to go to Chinese restaurants but only those in the US, and openly expressed her dislike of rice. To go and stay in the middle of one of the biggest rice-growing areas, where rice is for breakfast, lunch and dinner, but be resistant to eating the stuff seemed a little scatter-brained. She even persuaded her friends to post food to her from the USA.

It's not that those chinese people don't like the western food. I think it is more for them 'in case' they can't find some delicious food. You know people of Asia just don't know where to eat and stuff. I think it is because of that..