Fitting in or not

Wow –I have been neglecting my blog this week! Life’s been a bit full on and I am trying to catch up but it isn’t really happening so thank lord the wknd is ahead of us!

The other day I went to a seminar at the Swedish chamber. Every time I go to those chamber things I realise how damn tall Swedish men are. Yeah, sure, the ladies are pretty leggy too, but the men?! Bloody giants?!! I love being surrounded by them, it makes me feel small. I appreciate this especially seeing that everywhere else I go in China (the metro, the bus, the university, the gym, the park) I am a giant. But around Swedish giants I’m pretty… average.

Anyways, the lady who was speaking (a brainy Canadian) started off by trying to reach up to the microphone someone put out for her.

-Obviously someone Scandinavian has spoken in this one before! She said, glaring at us long legged people.

This brings back a memory of an interview I did some years ago at a Beijing Gymnastic school for kids. The school was training 3-8 year olds to become the future gymnastic stars of China. The kids were tiny, not to mention bendy.

I asked about everything from diet to training and at the end I asked the trainer (who was a former Olympic Gymnastic judge!) what he thought of Swedish gymnasts.

-Swedish gymnasts?! Haha! A joke! With your giant legs you can never look good on that bar.

Later at the school, I went to use the kid’s toilet. Seeing that the school was in the outskirt of Beijing, and many of the kids came from far-away provinces, they had never seen a foreigner before. So they followed me around everywhere, and five brave seven-year-olds even went with me into the toilet! Anyways, I closed the door to my cubicle, did my business (it was a squat thing) and when I stood back up I realised the wall to the cubicle was so tiny that my whole upper body was visible! Rising over the cubicle wall I realised that the five brave kids had been joined by another 15 curious ones, and when I turned up behind the wall saying ‘hello’ they all panicked, screamed and ran out.

I guess I should stick to the chamber meetings. 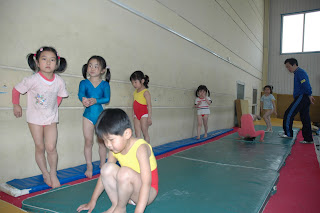 Posted by Jonna Wibelius at 7:17 AM

Just out of curiousity, how tall are you Jonna?

I'm 1.72cm, which is probably tall for a southern Chinese, but short for a Northern Chinese...

pingu, are you a girl or a guy? if you are a guy, 1.72m(i think u meant meter not centimeter, 1.72cm would be like an ant) for a southern chinese guy is not exactly tall either.

hmmm...all the southern chinese in Australia are shorter than me :p

I'm 1.75.. so not even that tall?! I sps over here it is though. Everytime I tell my classmates I get the 'ohhhhh' or 'ahhhh' reaction?