May holiday -a crowded story, as usual 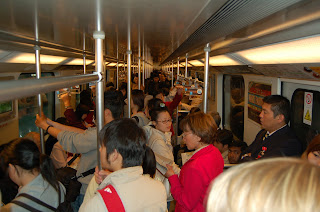 I thought there was going to be some sort of relief this year when it comes to the national holiday, seeing that the Chi Government have changed some days around in order to avoid the travelling hysteria… but apparently not.

Tomorrow’s the 1st of May and this will be celebrated with a 2-day holiday, called ‘labour holiday.’ The whole of China’s population (except hospitality staff, shop owners and the poor personal trainers at my gym) will have Thu and Fri off, and the travel hysteria has already begun. Try to get a train ticket for one of these days and you will know what I mean. Yesterday I went to a train ticket selling agent, just to be faced with a minor crowd around the counter with people yelling and complaining… When it was my turn I was told all the tickets from Shanghai to Suzhou had sold out. So even though I can get to Shanghai, I cannot get back. (I guess I have to reconsider my plans. Maybe I can hang at the gym instead and try to cheer up my personal trainer buddy Sean who works there 7 days a week, including all holidays).

Anyways, I suppose the sold out ticket dilemma is completely my fault. I should have planned things better and not waited until the last minute. But but…

However, the thing that annoys me a lot about this holiday is that everyone will have to WORK/GO TO SCHOOL on Sunday! This is to ‘make up’ for getting Friday, May 2nd off?!! Isn’t this just the most stupid rule u have ever heard? Why pretend people get a ‘holiday’ when u later have to make up for your free time? Couldn’t they just given us the Friday off, and then let us have the weekend as usual? Or, they can give the Thu off (seeing that is May 1st), tell people to work on Fri (as usual) and then let people have their weekend. Swapping a Fri to a Sun seems senseless to me, because it just creates the same travelling hysteria that I thought the Chi Government wanted China to move away from?

That does seem a bit ridiculous. What happens, does everyone treat the Sunday as a weekday? Do the public transport timetables change on the weekends? Can't help but see that this is going to cause confusion and delay.
Are the Chinese surprised by this also, or is it a semi-regular occurrence?

I'm guessing the reason is 1st of May falls on a Thursday. Since the Government want to create a long weekend and thus made Friday a day off as well connecting Thursday, Friday and Saturday. Of course Labour Day is only one day public holiday now, you can't get Sunday off anymore. tbh, I think moving the days around to create a long weekend makes more sense. Who would want to take Thursday off and only have to go back to work on Friday for one more day? :p

Dylstra -there isn't much change in the public transport time table during weekdays and wknds over here. The buses continues to come.. whenever they feel like it. Like once I was watiting for 40 min for a bus that never came.