Will I EVER be able to write? 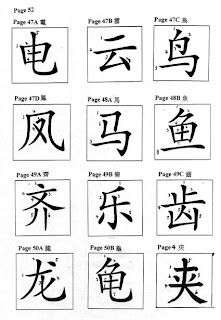 Easy-peasy, right?! The only problem is that there are apparently 8000 of them (although many are rarely used) and to be able to read well you should know about 3000-4000 of them.

Last Sunday many of my level 3 classmates took the HSK test. Apparently it was so hard that one of the Chinese supervisors said “Gosh, they are smart if they can do this because I wouldn’t be able to get much right!”

For those of u who do not know, the HSK test is, let me explain:

The Chinese Proficiency Test (HSK) is China's national standardized test designed and developed by the HSK Center of Beijing Language and Culture University to assess the Chinese language proficiency of non-native speakers (including foreigners, overseas Chinese and students from Chinese national minorities).

I guess you can say it is equivalent to the English TOEFL test to determine on what level you are on.

Seeing that the test was so hard I am quite happy I didn’t take it. My Japanese friend Anna also told me that the number of “Ou Mei Ren” (people from Europe and America) was close to zero… adding that: “I think it is fantastic that you guys even can get as high as to level 3 seeing that the Hanzi (the Chinese characters) simply makes no sense to you.” Well, if they can learn English ABC why can’t we then learn Characters?! Although I am not going to lie. I am having a pretty hard time with the writing.

That’s actually one reason why I am thinking that I will never take the HSK test. Even if I can read and understand characters, I cannot remember how to write enough characters to answer by handwriting. And even if I could, my handwriting would be too slow to fit into the time restriction of the test. How do you guys do it (speaking out to Ou Mei –or any other Chinese-as-a-second-language-speakers-who-writes-with-ABC-in-your-native-language)? Do you simply, by some unknown reason, master handwriting, or are you like me: whose handwriting embarrassingly enough often gets compared to the handwriting of a 5-year-old Chinese kid? Is there any easy way around the difficulty of writing, or any secret method to how you can remember all those strokes?

Actually, I asked one of my teachers about this, and she simply replied:

-Easier way? Jonna, let me tell you, the Chinese characters that you are learning now are already very easy, they are the simplified ones! You are so lucky you don’t have to learn the traditional characters that they still use on Taiwan, because that would be a challenge, but this one should be easy!

Oh it should? So where did I go wrong then?!
Posted by Jonna Wibelius at 7:27 AM

I am also experiencing exactly what you're talking about. I'm a college student just finishing my 100-level of Chinese (1st level I guess), And I have such trouble remembering how to write many of the characters! You're definitely not alone with your troubles.

Let me tell you, there is a Chinese proverb saying "Hao jixing bu ru lan bitou"--"Rotten pen-heads are better than a good memory" (sorry I'm not sure if this is the right english translation). That is to say, if you wanna keep the chinese characters in memory, you just have to write them again, again and again. To my knowledge, native chinese children sometimes are even requested to write and copy a character for 100 or 200 or more times! But I'm afraid you can never accomplish such a practice now with regard that you need more time to work and play and do many other things, right?

Hey guys, thanks for your comments and 'support' :) Patrick -hang in there. It will get easier. Are u planning to go on with level 2, 3 etc?

Lullun -always puts a smile on my face with your encouragement! :)

Anonymouse -I actually spend around 2 hours every day (except for the last 2 days, I admit I have been lazy...) just on writing characters. Even though I can write them at that time and at the next day's 'ting xie' (听写) I forget the strokes a few days later. Writing them over and over again helps me remember the word though, so when I later see it in a text I can read it (or ok, at least sometimes!). I suppose I have to try even harder.

well, two years is after all too short for a chinese learner (esp. for learning its writing). Stick to it for one or two years more, and I think you will have some achievement.

at my university, my degree requires 3 years of a language, so I'm going to continue studying until graduation, and hopefully go to China and be able to learn more. My goal is really to be able to read a newspaper, so however long that takes is how long I will be studying!

Writing in Chinese is hard. I can't write anymore but can still read a lot. :/

I wish I had tried harder to 'keep' my Chinese when I moved to Aus.

Like the guy before said, the only way you'll remember is through practice. No easier way unfortunately.

well you could always try dyeing your hair black XD

It was certainly interesting for me to read that blog. Thanks for it. I like such topics and anything that is connected to this matter. I definitely want to read a bit more on that blog soon.

Rather interesting blog you've got here. Thanks the author for it. I like such themes and everything connected to them. BTW, try to add some images :).