Sweden’s Prime Minister Fredrik Reinfeldt is currently in China to discuss some political matters with Hu Jintao. I can already sense how that discussion will go (I bet Hu Jintao is very concerned about what little Sweden thinks about world matters… or hang on a minute… No, he’s probably not) but since he is here I should mention it! 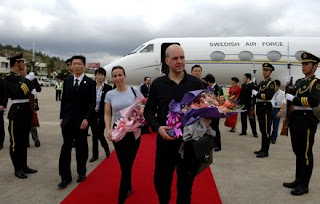 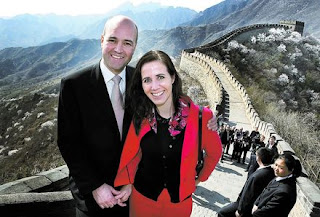 Sporting a suit at the Great Wall.

So far, Swedish newspapers have mainly been writing about what Mr Reinfeldt has been wearing, because despite his role as a man in power, he doesn’t get the whole dress code thing. When he walked off his private airplane in Beijing and was greeted by a rather overwhelming welcoming delegation (all in suits) he was wearing comfy pants and a worn out jumper. Then, one day later when he went to climb the Great Wall, he did so in a suit, meanwhile his wife was wearing a skirt and a suit jacket.

Say what you want about the political agenda, but one thing is for sure. Sweden’s prime minister needs a stylist! Rachel Zoe, can you here us?!

Posted by Jonna Wibelius at 7:10 AM