When I met Nike 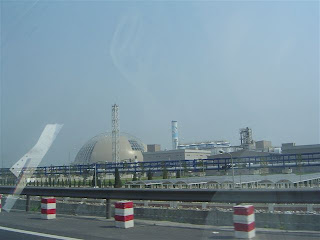 I spend yesterday afternoon in Kunshan, doing some work, and like always in China, things took longer than expected and I ended up missing my train back to Suzhou.

I went to buy a new train ticket and asked the young Chinese guy in front of me if he knew when the next train to Suzhou was leaving. He didn’t, so we asked the ticket seller.
-6pm she answered.
It was 4.15pm.

The young guy asked me if I wanted to share a cab, and I thought ‘why not’ and walked over to a place that had a ‘common’ taxi service, meaning he would drive 4 random people who wanted to go to Suzhou for 25 kuai each. Haha –screw the trains! (Does anyone know if this sort of taxi service exists in Shanghai????!)

During the journey back to Suzhou me and the young guy got to know each other. His name was Nike.

-Nike, as in the….
-I really like sport!!! He said.
-Yeah me too. I replied.
-So maybe you should change your Chinese name to Adidas?

By then I knew we were going to be great friends.

It was so much fun to get a chance to speak Chinese. This might sound a bit odd to many of you, but getting to know Chinese people, unless you work/study with them, is kind of hard?! I get this feeling that every time I try to approach people get scared, or, they simply reply to my Chinese attempt by speaking English back. Not so encouraging.

But Nike was a champ. Young, fun and open-minded. When we later tried to get a taxi in the rain (yeah, the downside with this taxi service was that it dropped us off in the south part of the city, kind of far from where I live) he taught me some useful phrases that I’d never get a chance to learn at uni, including: ‘oh my gosh!’, ‘damn!’ ‘shit!’ and some other curses. You know, those every day phrases you sometimes feel you lack…

Less fun moment of the day: Nike eventually deserted me for the bus. I was also going to take a bus but after waiting for 30 min (without the right bus turning up) I gave up and tried to get a taxi again. By that time there were bit pools of water on the roads and the cars took turns in splashing it on me. I didn’t get home until close to 7pm, and by that time I was a soaking wet story.

But hey, I got to see Kunshan (an industrial wild-wild-west), I met a new friend, and, I ALMOST took a public bus! That doesn't happen often during my every-day life in China!! Can't believe the buses here cost 1 kuai! Yes, ONE single little kuai!!?! No wonder they sometimes cannot be bothered to turn up...
Posted by Jonna Wibelius at 7:20 AM

only 0.4Kuai in BeiJing when u take the bus

happen to find your blog in chinabloglist. it seems we chose the same blog template and the background color is green.

Wow, still that cheap?
Bus ticket where those prices when I last went to China, which was over 7 years ago.
Guess Government regulated goods services doesn't get effected by the 8% annual inflation China is experiencing...