When I first came to China... 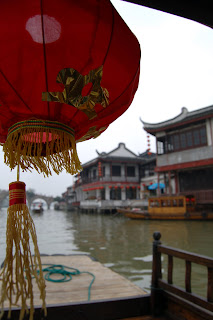 Since the chronicle is about initial thoughts and experiences of arriving to Shanghai or China in general, I have to bring out some old memories of me being lost in the big city. Coz seriously, I was lost! Probably more lost than many people who come here, armed with their Lonely Planet. Yes, I had a map but that was about it. And no, despite brave efforts with a young Chinese girl from my previous work place in Finland, I didn’t speak a word of Chinese, and neither did I understand something.

During my first month in China I completely relied on sign language… that I made up on my own. Or, I tried to imitate what I heard other people say. My first Chinese friend told me that when I get out of a taxi I should ask for a 'fa piao,' a sort of receipt that is good to have if you leave stuff behind in the car. Sure, I thought, and for some reason I mixed up fa piao with the phrase ‘mai dan’ which you say when you want to get the bill in the restaurant.

So there I was, two days later, at a restaurant shouting ‘fa piao, fa piao!’ to the different waiters passing me. The looked at me as if I was from another planet. I hadn’t even paid yet and still I was calling for the receipt?

My Chinese friend was not impressed when I told her this story.

Another day, me and my bf when to our local little supermarket to buy some chicken. (When I first came to China I tried to keep up my 8 year long vegetarian diet, but it didn’t take long before I crumbled and gave in to first eating chicken, then beef, then… everything else from the meat kingdom. But yes I know, boooo, bad me! But it's so hard not to eat meat here? Even when you order tofu it is swimming in meat sauce?!).

Anyways, we were standing in front of the fresh meat counter and looking at the different packages of meat, trying to guess which one was chicken and which one was beef. This was at an early stage in my ‘eating-meat-comeback’ so I didn’t want to upset my stomach with beef, and therefore it was very important for me that we bought chicken and nothing else.

-Is that chicken? We said, pointing at one package.
The large Chinese lady behind the counter gave us a snort. Nope. She didn’t understand a word we were saying.
-Chicken! I tried again, this time flexing my arms in the air like a bird.
Another snort from the meat counter lady. And some curious glances from the shoppers around us.
-C-H-I-C-K-E-N!! My boyfriend tried, as if that would make her understand.
It didn’t.

I was about to give up when I suddenly saw my boyfriend starting flexing his elbows in the air, adapting a strange walk, swinging his head back and forth and doing a sound that obviously was supposed to sound like a rooster/chicken/hen… "My lord," I thought. He is imitating a bloody chicken?! And I am not even that hungry?!!! I don’t think I need to tell u he looked like a mad man in a mini mall.

-Aiyaaaaa!!! It came from the counter. The meat counter lady had understood us! With a big smile she handed the package of meat (obviously chicken) to my boyfriend while saying something in Chinese. By this time a small audience had gathered around us and an older gentleman wearing a suit came up to us and said in a business like manner:

-If it is chicken you want to buy, that package has chicken!
-Yeah, we also understand that now! My bf replied.

Oh the sweat memories. I almost want to come here again for the first time just to make a fool of myself! (not!)
Posted by Jonna Wibelius at 7:39 AM