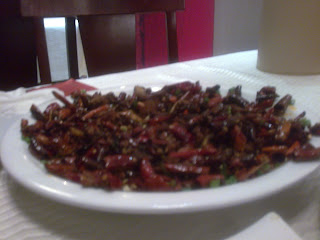 A bad photo (mobile shot) of a good dish.

Yesterday was a happy day as I finally managed to locate a decent restaurant in Suzhou: a spicy Sichuan joint that served up chili dishes so hot that my lips were still burning 30 minutes afterwards. Other expats in Suzhou often rave about a pricey resto called 'Zen' that serves up local Suzhou food. It might be because I am not a fan of sweet food, or, I simply thought it didn't cut it: but I have always been disappointed when eating there (especially after paying 40 kuai for a mapu tofu that's not even spicy enough).

Other Suzhou restos (except for a bunch of Korean joints) have also failed to please my (actually not that picky) taste buds, and the popular expat-hang-out-area: Xing hai plaza with places like 'Mr Pizza,' is simply bad and lacking in terms of hygiene! But now it looks as if there's hope for Suzhou's restaurant scene! I forgot to check out the name of this place, but I'll get back to you as soon as I go back (which will probably happen in the near future) to report on both the name and the dishes. Last night we ate some spicy chicken, sour and spicy potato shreds, pork ribs and a dish I don't know the name of, but it is really really good. It's small pieces of sesame bread (?) that you then fill up with beef, salad and cucumber. I think some people refer to it as a 'Chinese hamburger' but to me it felt more like a mini kebab... Anyone know what I mean? Otherwise I'll take a photo of it next time (maybe already tomorrow... hehe). 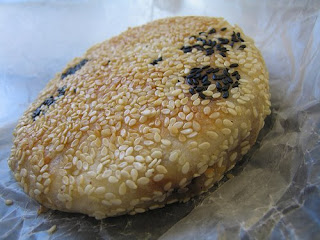 The bread looked like this although no black seeds. 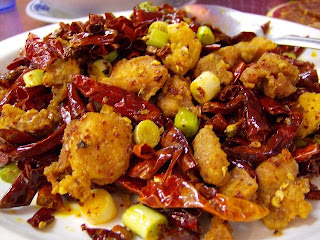 A better shot of how the chicken (almost) looked like (the one we ate had more chillies)... Next time I'll bring my good camera!
Posted by Jonna Wibelius at 8:30 AM

I find it reassuring that Chinese people, when I asked them, much prefer Chinese over any Western food. They have more of a theory of how to optimize taste and keep it balanced. Chinese food is healthier, as well, with its meat and vegetables. Plus, Chinese food is never so dry as to cause you trouble swallowing and digesting it.

I wonder, though, what's so different about the oils in Chinese food compared to oily Western food, to give you those arrived-in-China stomach aches?

It's the AMOUNT of oil that is different!! We use a little bit of olive oil for frying things.. Chinese people, however, they use loads!! A lot of the food here, veggies, tofu, beef... is swimming in oil when it is served. Once u get here u will know what I mean. Obviously u can always order less oily things, which I try to do. Overall I think the food is great here. Just a little bit oily.

If you walk into the hole in the wall type of restaurant, you can always ask the chef to use less oil and salt. Western food tend to use less oil, but also lots of cold oil used in salad is kind invisible.