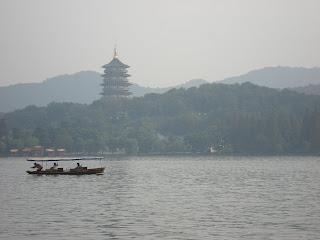 It's not been SIX days since I last hit the gym. SIX BLOODY DAYS??! My whole body is itching. I feel as if I have lost my shape/fitness entirely and that it's going to be h*** to get back into my daily training routine... obviously this isn't true at all, but rather a lot of exaggeration from me, as it shouldn't be that hard to get going again, but it just FEELS like that a.t.m. It's still another week until I can remove the stitches but obviously I cannot wait that long so I've decided to hit the gym tonight already. I mean, I did the HHH-run, and I survived? It can't be that bad for the stitches with a bit of sweat, the main thing is that u don't stretch that area, right?

Since we are on the training topic -I am thinking about running Huangzhou half marathon rather than the Shanghai race. Huangzhou h/m is on Nov 9 and it goes around a huge lake that is said to be 'very beautiful' (I wouldn't know, since I haven't been yet) and that actually sounds more appealing than running next to the cars in Shanghai. Also, the Huangzhou race starts at 8.30am rather than 7.30am. Since I am not a morning runner this might help a little bit (at least I won't have to get up at 3am just to have breakfast. With a 8.30am start maybe it is enough if I get up at... 4.30am? I have to eat some hours in advance to avoid getting a stitch while running). I guess the only downside is that the Huangzhou race is quite soon, Nov 9, meanwhile the Shanghai race isn't until Nov 30... So I miss out on some training.. but well, I don't know how much that matters in the end. Right now it looks like I am going to run in Huangzhou at least, let's see what I've decided in a week.

Anyone else interested in running the h/m or the full marathon in Huangzhou? Here's a link to the race: http://www.hangzhou-marathon.com/
Posted by Jonna Wibelius at 7:04 AM

Why dont do both?

And then start 2009 with Xiamen Marathon

hehe -u must think I am superwoman? Dunno how I made that impression. I would never be capable of running a full marathon a.t.m... I reckon I would hit the wall after 3 hours f running.

Running BOTH Huangzhou and Shanghai half marathons also sounds a bit challenging, but at the same time... why not? In case I screw up during the Huangzhou race I have I chance to redeem myself during the Shanghai race. Hm... good idea. Will do.

hallo! I just wanted to say hi because i stumbled on your blog and really enjoyed it. am definitely going to keep reading- hearing about other lao wai experiences in shanghai is really helping me figure out my own :) thanks!

Hi there, I am training for the Hangzhou and Shanghai full marathon too. Hangzhou will be my first while Shanghai will be my second.

Some pictures can be seen at http://www.asunsun.com/gallery/index.php?cat=2