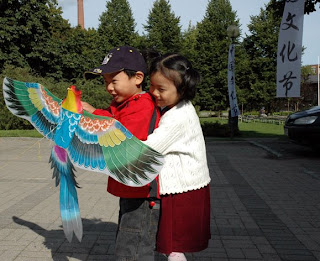 Hugs in China -only for kids?

Yesterday I met my friend Rock (from Hunan) for the first time since I got back to China. He seemed genuinely happy to see me and opened his arms as if he was going to give me a hug?! Now, this is very odd. In China, you don't hug. A stiff/lose handshake is the closest I've gotten to my 'aquintances,' meanwhile my trendy Shanghainese girlfriends often give me a cheek kiss. Obviously I didn't really know how to react to this gesture of friendliness, so I simply waited for him to make the next move. And as expected, he quickly closed his arms again and that was it.

However, later the same day we were talking and then he asked me how we greet our friends in my home country.
-With a hug! I said. (Swedes love hugging. Guys hug guys, girls hug girls and so on. It is actually a greeting that I have gotten used to not use since I have been living abroad for so long and I have noticed that the hugging-party doesn't really happen overseas... here u r expected to deliver cheek kisses. Nowadays when I go back I only hug my closest friends/family. Most Swedes will hug their acquaintances as well)
-You guys are so lucky. In China there is no such thing as a hug. We are so bad at greetings.
-So what are you saying? That you wish that you guys would also hug?
-Yes, well, sometimes, like when you see a friend it would be nice. (ahaaaaaa.... so he was going to hug me?! That's so sweet!)
-But those times when I have tried to hug my Chinese girlfriends they have gone all stiff and weird and I have felt like a fool.
-Well like I said. There's no hugging culture in China.
-Do you think you'll ever get one?
-Maybe not. Most people prefer a handshake.

I cannot agree more. Actually, only one week ago at a company farewell dinner, the expat guy who was leaving tried to hug his Chinese female colleagues that he had worked with for the last 3 years. Most of the girls reluctantly agreed to some sort of stiff body contact, although they looked highly uncomfortable. One girl ran away.
Posted by Jonna Wibelius at 9:00 AM

In England, guys kiss their female friends on one or both cheeks and shake hands with guys. Girls kiss other girls and guys. It's almost rude not to, like a sign that you're not that close. But I have the same problem in China as kissing would freak some girls out, while some "modern" Shanghainese are very accustomed to kissing - I am guessing they hang out with French expats a lot! It makes it awkward when in "mixed" company. By that I mean out with a group of 5 girls, some are modern and are kissed and others just expect a Chinese wave goodbye.

I know.. it is quite funny actually that u never know how to behave when u meet new Chinese friends here. Handshake, hug (not!), kiss or wave? Always a guess!

Then, as if that wasn't enough, there are the different kind of cheek kisses too: 1, 2 or 3 -kisses?!

I wish we could just stick to the hugging.

This is going to be a problem for me. I'm a very "hugging" person. Just one hug, and then all physical contact is off limits. But I almost always great family/friends/friend's friends with a hug.

Jonna, you asked in an email when I would be be coming to China. I should be getting confirmation on the Z Visa in about ten days or so, so I'm hoping to be in Xi'an by the 20th. Fingers crossed.

It wasn't that many years since even a handshake was pretty revolutionary and going slightly OTT. Generally the Chinese people are fairly conservative and for many years/decades/centuries [someone tell me how long] any physical contact, especially male-female, was frowned upon.

I didn't mind while I was in China, - better than the S. European habit of groping and kissing all over on meeting every stranger, male or female.

Last time I hugged a Chinese girl and I got bitch slapped.

Your article is very interesting ! You know what? In the Netherland we have to give three kisses (girls to guys and girls to girls). Guys to guys just give a handshake. I dont mind to give SO MANY kisses but sometimes I do feel we are overdo it. Especially when I am going out with a group of more than 10 persons....

Chinese or Vietnamese culture (I come original from Vietnam) is quite traditional. When we moved to the Netherland my aunt has to run away when a man tried to greet her with a kiss. Funny huh!

Aimee -yeah the 3 kisses thing I still have a problem with. They do it in Belgium too, right? I never know when to stop and last time I kissed everyone 4 times just to make sure. That resulted in some odd glances as well...

Anonymouse -bitch slapped?! hahahaha. OK I get it. I'll also avoid physical contact with my Chi friends from now on.

Flotsam -agree... I'm not huge on the kissing either.

Okay okay, I have to confess I only got bitch slapped when I tried to grab her ass while hugging her. But for somehow she became my girlfriend a year after. So you should feel safe to hug your Chinese friends.