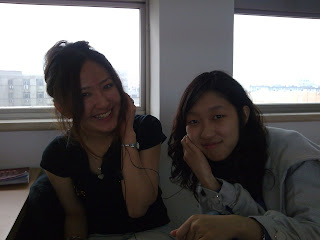 Two of last year's classmates (Japanese Anna and Korean Ashley) listening to Swedish music from my iPod. Unfortunatley none of these girls are in my class anymore

Yesterday was my 'first day in school' and I noted some nice surprises... for starters, my class was quite small, only 18 students! (For being a class at a Chi uni this is SMALL! Last semester I our class had about 30 students) Considering the fact that at least 5 students will drop out throughout the semester this is even more great. Less student -more chance to talk. Me like!

Moving on, it wasn't just Japanese, Koreans and me in the class: My class has 2 Americans (although one seems to be an ABC), one girl from Malaysia, one guy from Turkey and one girl from Indonesia (that I studied with last semester). The rest are Japanese and Koreans. This is a highly international mix at this level I must say. Fun!!

The teachers seem nice and harsh (I like harsh!), and so far one is male. I REALLY like to have male teachers, mainly because in their classes there is no such thing as 'giggling' but rather you move straight to the point. Greeeeat!

Finally, we get a chance to study business Chinese this semester. It's a non-compulsory afternoon class (on Mondays..... hmm) but I am def going to take it. I don't understand why they don't replace that essay writing class with business Chinese. Much more useful! But but.

* We have to keep a journal in Chinese and write in it each and every day. Let me tell u this -my journal is going to be the most dry thing u can imagine, simply stating the same things over and over again ("The weather is nice. My stomach hurts. I have forgotten so many characters. Today I ran for 1.5 hours..." yadi, yadi, yadi....)

* We have to start buying a Chinese newspaper at least once a week and read and review one article from it. (Yikes!) Anyone know the most simple Chinese newspaper? Something with soft, human interest stories?! (And no, I am not going to cheat and buy Shanghai Daily)

* We have to watch TV/DVDs in Chinese (with no subtitles)... For this I am planning to ask for some assistance from my Hunan friends to help me buy something good (and fairly easy). Otherwise I know I'll just go to the shop and end up with a Korean soap opera instead of a Chinese one. (Korean soap operas are big in China). If anyone knows some Chinese soap/TV/comedy show that is fairly easy, please give me a shout!

As you hear -I am going to be a busy bee this fall. Right now it feels kind of exciting though. I bet in one week I won't feel the same.

Another side note: new faces replacing old seems to be the case at Suzhou Uni!? From just spending one morning at the campus I realised that pretty much all of the students from last semester are gone and that 86493649863 new foreigners has arrived. You can really tell that it has become trendy/popular to study Chinese amongst Westerners... there were just so many of them?! Only in the last 2 years the amount of Westerners studying Chinese at Chinese universities seems to have increased with 100%.
Posted by Jonna Wibelius at 7:12 AM

For Chinese soaps, there are soooo many. I prefer the Taiwanese ones. One of my old favourites is 流星花园 (Meteor Garden) and one of the most recent one is 命中注定我爱你 (Fated to Love You).

The only problem is Taiwanese accent is slightly different.

this might come in handy:
Chinese Forums
you should check out the first episode project!
greetings from 德国.
janosch

"Devil Beside You" (恶魔在身边) is relatively easy. It's also Taiwanese.

For a your reading assignment I recommend buying 读者 'Reader'. They are available at all newsstands, are only 3/4 kuai and have lots of interesting short stories and short articles.

My favourite TV show is 鲁豫有约. It's a chat show hosted by 陈鲁豫 who is kind of like the Chinese Oprah. The language is very conversational and the guests are sometimes very interesting. Some videos are up on youku.com and tudou.com

Hey cheers guys for all the recommendations! I'll def visit the news stands and the DVD shop in the near future to stack up.

Aooch it was such a painful day at uni today though, I went from being excited about studying again to feeling like a level 1 student in less than 10 minutes (yes, there was character reading involved in this).

Little Tiger -where did you study before and where r u at now? Good on your for going on with your Chinese overseas?! Do you also use Chinese in your job?

Pingu -I think Taiwanese is OK. One of my friends is Taiwanese so I am quite used to his accent.

If you have decent internet at home, don't bother buying the dvds. Sites like 6.cn or youku has them pretty much all.

check out 奋斗 struggle. It's a soap about twenty somethings trying to make it in the big city and has tong da wei in it, who's in lost in beijing.